I feel I must interrupt this series of Campbells Camping posts to comment on recent events in Ankara and in my life.

First, a car bomb was detonated in our city. It killed 3 people and injured/maimed many others. We learned about it before even the news stations did. Our school's caretaker was within a mile or so of it, and he called us. He, believing God intervened on his behalf, said, "Had I left one minute later, I would have been in it."

Amazingly, he was not even supposed to run that errand. Our Turkish Vice Principal was. She was expecting a baby and about 1 week until her due date when her water broke late at night. While in labor, she realized she had a paper that needed to be delivered urgently to the government on behalf of the school. She contacted our caretaker who ran the errand for her. So in reality, the delivery of her child prevented her from going. And that saved her life. And God spared the man who did go on her behalf.

I went to see her that very night. And I saw this... 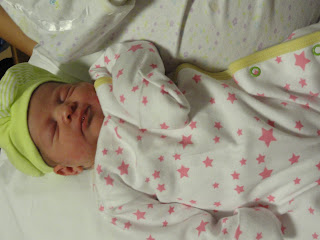 ( Very dangerous for me, a woman who is 'done' having kids.)

We have since learned that the police believe the prime suspect had breakfast and stored his car in our little neighborhood prior to his crime.

But life goes on. Sweet Cheeks begins her first-ever ballet class tomorrow. She asked me tonight if I could perhaps create a special ballet breakfast for her tomorrow morning. I said, "What do you mean?" She said, "Oh, maybe make my breakfast look like a ballerina and everyone else's just look normal."
Posted by Sara Campbell at 9:33 PM

I love Eva! :) That's my girl! Her counterpart over here (Karoline) has been after me for years to take sign language courses. She even tried at college this past year but couldn't get in. So, what does she do? She buys herself the biggest book she can afford and begins teaching herself. Now three out of four (only because the fourth one is in Virginia) are running around our house silently talking to one another. Karoline made the boys learn because she wouldn't talk to them any other way. Ha.

Wow Sara! That is amazing how God worked that out to save your friends! He is so good! You guys look like you had a lot of fun on your camping trip too! Hope you guys are doing well! Kim