I really have not forgotten my Russian Adventure! I'm behind on blogging because I'm gone from my home 7:30AM-6PM every day...but I am determined to keep this blog moving!

M got me up the next morning to see the sunrise over the canal near her house. I was happy to go! I got to see early morning ice fishing. 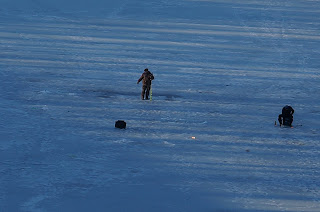 It was just impossible to take a bad picture! Here is the lock for the canal. 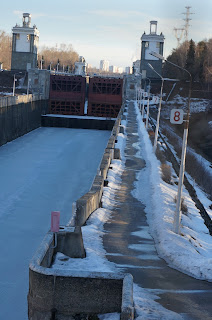 This lone dog was guarding the path. 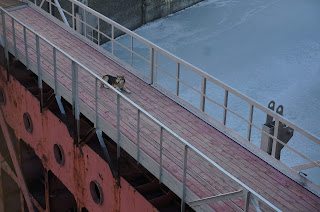 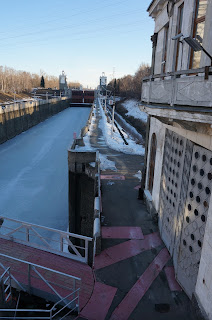 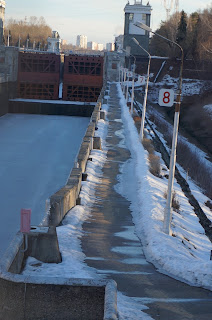 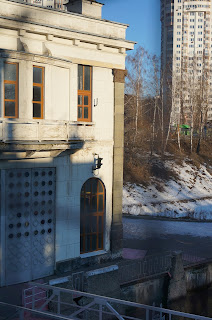 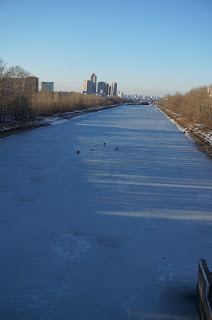 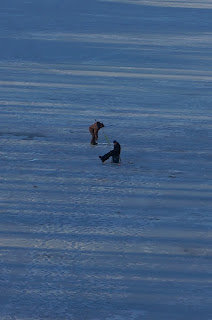 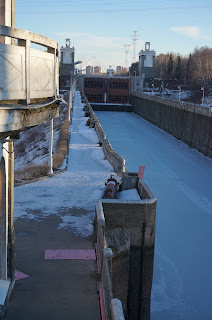 It was well worth the loss of sleep!
Posted by Sara Campbell at 10:36 AM No comments:

It was so wonderful to get to see Red Square! I grew up praying for Russia daily in elementary school. I could hardly believe I was actually there! 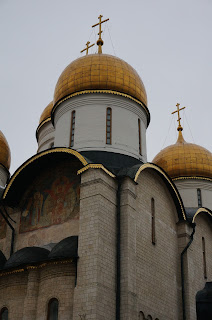 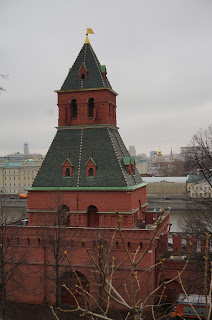 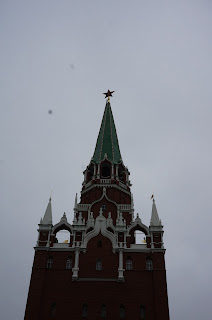 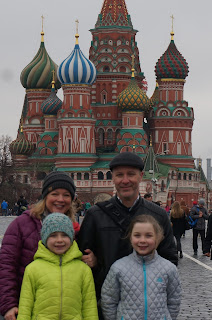 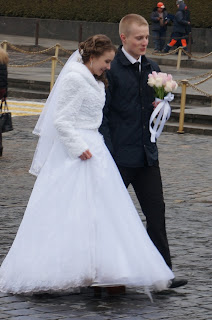 We got to go inside St. Basil's cathedral. 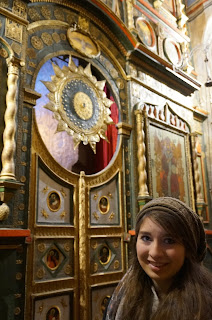 It was absolutely beautiful! And so is she! 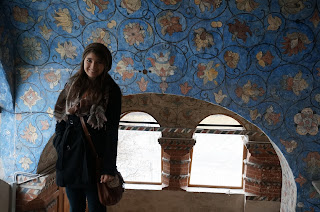 Posted by Sara Campbell at 9:09 AM No comments:

It was so wonderful to see S and M and their twin girls! We shared so many good memories from college, and M stood with me at my wedding. The first morning, we headed out. They took us to the subway system. But this was not an everyday adventure. Very quickly, S realized we were being followed. Of course we were. He works for the FBI and a couple of "Turks" have flown in for the weekend. (I failed to tell you about my experience with the immigration officer the night before. Generally, I photograph that which I plan to blog, but I felt best not to ask him to "Say cheese!" He asked me why I wanted to come into Russia (who is currently unhappy with Turkey) and why I live in Turkey. I was really hoping to promote my US citizenship, but he quickly realized I had flown in from Turkey. I said, "I am here to tour. And to see my friend." Please imagine here your very best Russian accent..."Ah, you are here to see your boyfriend, then." I was speechless. Shucks, no. I don't have a boyfriend, I'm married! Anyway, he grumped a bit, then let us through. Soon in the airport, we began seeing Russia from our naive eyes! The women police officers work skirts, heels, and pistols. I am not sure I've ever actually seen a woman police officer in Turkey. Man, they looks classy!)

We enjoyed catching up that night, then slept like logs after our journey! But back to the "being followed" part...so S realized there was a guy tailing us as we walked. So we stopped. So he stopped. (So, Firstborn and I were DYING! Was this awesome thing really happening to us?!) Then he made a phone call. Then we walked down the stairs to the subway. Then he walked down the stairs to the subway. Then we rounded a corner, and another man standing there snapped our picture. Tag teaming, I tell you! It was all terribly exciting, and we probably talked about it the entire day like we were in junior high. Just livin' the Moscow experience I tell ya!

The escalators in the subway were SUPER long. 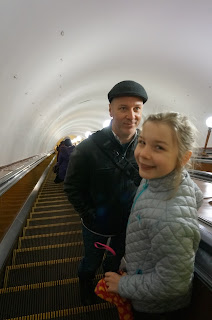 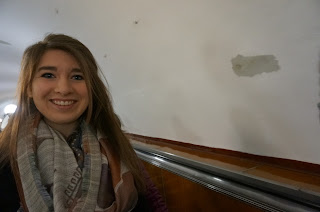 And they were built in the early 1900's. They were SO beautiful and classy. 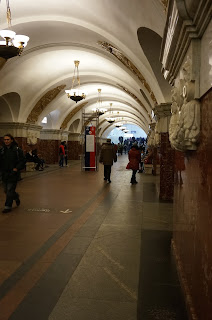 The guy with his back to us was the who followed us! I took his picture, too, when he passed us off, because I'm mature like that. 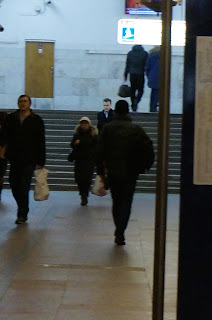 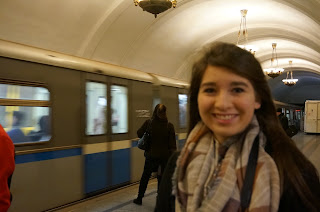 They really lived up to the stereotype I had for them. Lots of police. Lots of fur. Lots of hats. Lots of guns. 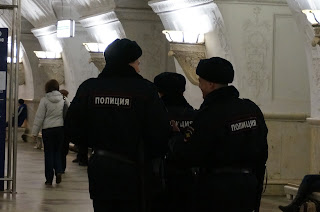 Posted by Sara Campbell at 11:23 AM No comments:

Russian Adventure: From Here to There

I had a very big adventure last month! A combination of several wonderful things happened at once. My good college buddy is currently living in Moscow, taken there because of her husband's FBI job. (I know, crazy. It's like living out our board game "Clue: Secrets and Spies"...the laptop with Agent Black in Moscow). She really wanted to me to come see her while she's living so close, and their family came to see us for a week or so. Additionally, Firstborn was turning 17. And when your little baby is suddenly 17 and a year out from moving away, you begin to want to spend birthday money on memories with them rather than tangible boxes to open. And finally, we found flight tickets for less than $200. So, that settled it. I took our only 3 day weekend, and off we went.

She was the best traveling buddy ever. I loved every minute of it. Here we are in the Ankara airport, waiting on our first flight. I felt like the entire time I was with someone more responsible than me! 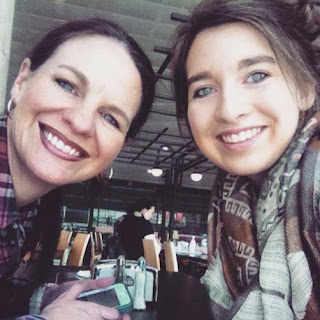 When we landed in Istanbul, we kept seeing men wearing only towels. I suspected they were on the way to the Haj at Mecca. So, I asked the ticket agent, and she confirmed it. 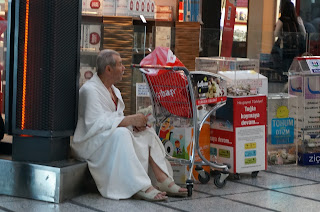 What we didn't factor is that it was soon to be Friday (holy day) prayers. Soon, all of the women in the entire back wing of the airport were washing their hands, feet, and faces in the bathroom for prayers. And then there we were, two little white gals, sitting on the bench at the gate, surrounded by 50 women bowing and reciting their prayers, with a man standing up on the bench singing the call to prayer. It was overwhelming to say the least. I suppose because it was Turkey, and all these aunties were village Turkish women, I didn't feel as uncomfortable as you might think. I am glad we experienced it together. We said our own prayers. It was a good reminder. 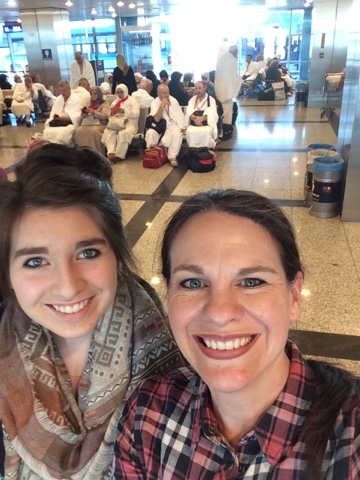 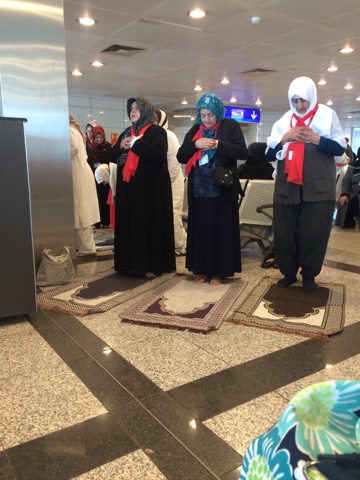 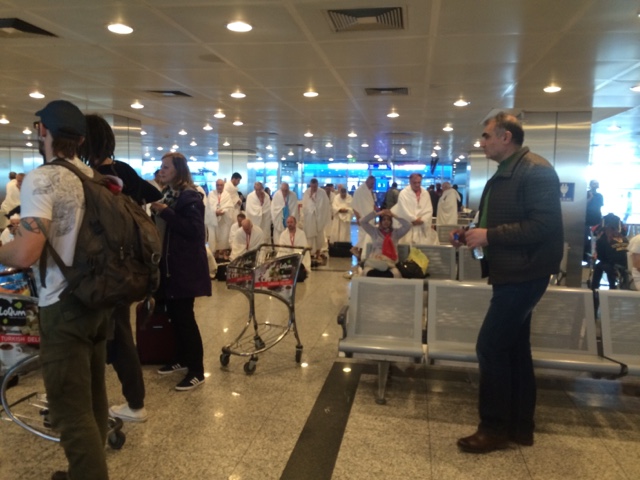 Posted by Sara Campbell at 5:49 AM No comments: