New Labor Induction Techinique for only $1.50

On Monday, I left at 4 in the afternoon with Mary Erin in charge of Annika and Eva at home, and Esther still in her Tae Kwon Do class, with Ross soon to bring her home. I walked down our street and caught the dolmus (small public mini-bus). As soon as he took off, I realized I had a madman as a driver. He was FLYING. I could not even get the money out of my purse safely so I just hung on. A very nice covered lady stood and gave me her seat. I have NEVER in my years here had a dolmus ride like that. On the first stretch, he almost rear-ended 3 cars, then he swung into the turn. We should have lined up behind the 15 cars in front of us, but instead he bypassed them all as they waited at the stop light, using the oncoming lane to pass, nudged his way into the front of the stop light line, then flew thru the intersection in front of everyone. I thought how glad I was my kids weren't on the bus! At that point, I thought, "I need to get off this bus." But my only alternative was to get off on a major highway and try to catch another bus there, another dangerous thing to do. So I stayed on it. While on the ride, he ran red lights, swerved in and out of traffic, yelled at all the passengers to find out where they wanted off ahead of time. It was clear he was not going to go the route, he was going to just drop us where we wanted and take shortcuts. As we passed police cars, he yelled at those standing to sit down, so he would not be pulled over for filling his bus too full. Well my 30-45 min. normal bus ride was 10 minutes flat. I was talking to Ross on the phone just before I got on, then called and said, "Guess what...I am here." He could not believe it! I laughingly called a friend and said, "Well if that dolmus ride doesn't put me in labor, nothing will!" I took another short bus ride to my clinic and was a full 30 min. early b/c of that driver!

So, I taxied back to the bus station and hopped on my dolmus and wouldn't you know I had 4 contractions on the way home! They stopped some time during the night, but I would have had a good laugh if I was right and that bus ride started it all! And to think, it was only $1.50 and just down the street all along.
Posted by Sara Campbell at 3:53 PM 2 comments: 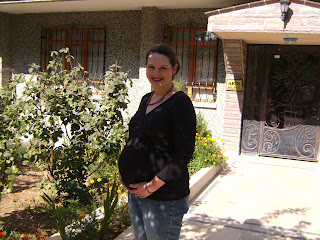 I think I learned all about contractions in about the Second Grade. They seemed so easy then. You take 2 words and make them into one word, by putting a little 'comma in the sky'. Well those days of easy contracting are over. For whatever reason, my body contracts for about a full month prior to baby delivery. This phenomenon started with my second daughter Annika. Being only baby #2, I was clueless. Every time I felt pain, I wondered, "Is this it?" Now doing this again with baby #5, I have gotten a little smarter. I assume, "This is most certainly NOT it." and I continue on with life. Last night I was awoken by some pretty extreme contractions at 12:20pm. I sat straight up and breathed deeply, then got out of bed. 15 minutes later another followed, and so on. I decided to record them because of the intensity. But how does one entertain herself during such an episode? I got on facebook, I called my sister-in-law, I made a peanut butter and jelly sandwich for the 1 daughter who opted not to order a slice of pizza on Friday pizza day, then I got into the bag of Tostados with a 'hint of lime' that was a gift from a friend with US Base Access. Along about 3:45, 3 hours after they began, I went back to bed and they stopped. I just don't remember having this much trouble figuring out contractions in 2nd grade.
Posted by Sara Campbell at 9:32 PM 3 comments:

Where did the time go?

It is hard for me to believe that I have not blogged in 3 months! I guess during June, July, and August, I just put it on hold and decided to live it rather than live it and blog it. But I am back!

-I arrived in the US 2 weeks before Ross (with Annika and Eva) and that was tough. Esther, back in Turkey with Papa, became sick. Mary Erin became her babysitter while Papa closed out the school year. Mary Erin and I baked cookies together via the phone and learned how to instant message each other on the computer daily. I was so happy when the time came for them to join us and don't plan to separate again unless by an act of God or the Turkish police!

-We enjoyed family time with the Campbells and Fishes. Eva went from calling her cousins "friends" when seeing them in photos to being able to name all 8!

-We spent one week attending a VBS called Jerusalem Marketplace. I was a helper and was dressed as a very pregnant Jewish housewife all week.

-Eva turned 3 in July and has mentioned her birthday, cake, candles, party daily since. The next morning she said, "Let's do that again today, ok, mom?"

-The kids got to take swim lessons again and I happily watched my children surpass my swimming and diving skills.

-Ross gave Esther daily bike riding lessons and she eventually began breaking rather than jumping off the bike when she was done.

-We enjoyed the people most of all...family, dear friends, time to catch up.

-We headed out on a Friday afternoon, planning to arrive in Ankara by Saturday evening. The following Tuesday night we finally made it (after delays and nights spent in both Memphis and London). Our bags made it by Thursday night, soaking wet.