I was very blessed to get to go out to dinner with many of my friends here for my 41st birthday. We hit Burger Story and had some great burgers and fries. The plan was to then go to an apartment and watch a movie. The party just sort of morphed into a highlighting-hair party. I'm sticking with my solid brunette look, but I got to play around with doing highlights on some friends. We had a great time. I am blessed with friends!

Posted by Sara Campbell at 10:43 PM No comments:

Friday the 9th was our (CC's and my) birthday. He's 4 years older than me, almost to the minute. It was also his last day to be here before flying out for 2 weeks. It was a very happy day. These sweet little girls in my class surprised me with cheese popcorn and cupcakes to celebrate with our class. I was told they had picked strawberry since they knew I liked healthy foods. That straight-sugar-strawberry-flavored icing was amazing, and I am sure, very healthy. 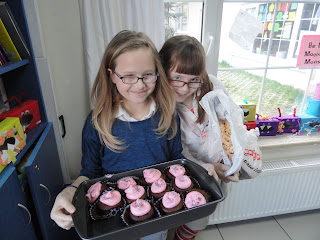 The staff sang to us, and Twinkle Toes' teacher made us a cake. 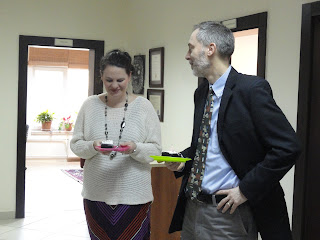 The rest of the day was a blur. CC was packing and finishing up loose ends. Even at 11PM, he was running over to school to print something for me that needed to be mailed. He insisted on taking the car out (late at night!) to fill it up with gas for me. We went out for a quick bite to eat together to celebrate our birthday and say goodbye. By 1AM, I hit the sack, but I don't think he ever went to bed before his 4AM pick up for the airport. He gets home tomorrow, should be boarding a plane now!
Posted by Sara Campbell at 8:28 PM 1 comment:

Just before CC left, our birthday, and Valentine's Day, Oasis had our 100th day of school. The lower elementary really celebrated! The teachers let the kids dress up to be 100 years old. This little girl really got into it. We put powder in her hair. The glasses came from the lost and found years ago (It sometimes pays to be hanging around in the summer, long after school is out!) She bent over and made her way to school with her cane, proud as punch to represent a 100 year old lady! 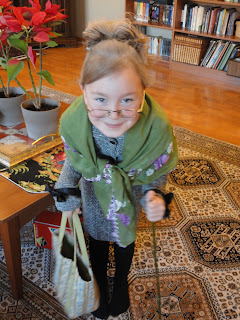 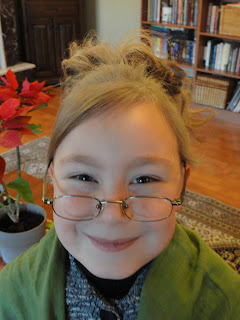 The tree I bought at the teacher supply store last summer (and mom got laminated for me) was the best purchase I made all summer. In August, it held summer t-shirts, decorated with pictures of what each new third grader did over the summer. In the Fall, it had multi-colored leaves. When Winter came, snowflakes clung to its branches. Before the end of the eyar, we'll have cherry blossoms and green leaves with some Haiku poems around it. 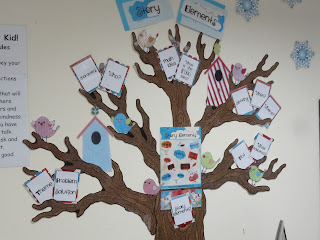 I found this idea on teacherspayteachers. It was just a freebie with cards to teach story elements. I blew them up, laminated them, added a couple of birdhouses and birds, and now have a bulletin board.
Posted by Sara Campbell at 9:45 PM 2 comments:

An Idea for Multiplication Facts 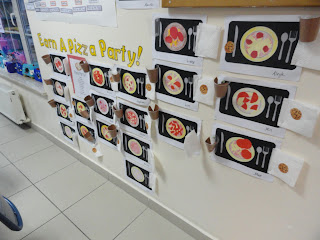 Third grade is the year to learn multiplication facts. This year, I started a reward system for my students where they could "build" a pizza party. As they learned and passed a timed test for each set of facts, they earned more and more parts toward a pizza party. 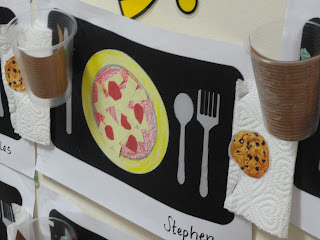 2's were the plate, 5's were the sauce, 10's the cheese and so on. We got all the way up to 7's, 8's and 9's with a cookie, coke, and free homework pass. It was a fun way to do it. And this smart teacher made the reward land on Valentine's Day. We knocked out all the wild stuff in one day!
Posted by Sara Campbell at 10:49 PM 1 comment:

This year I collected old tissue boxes and let the kids turn them into monsters. They'll hold the valentines they exchange. 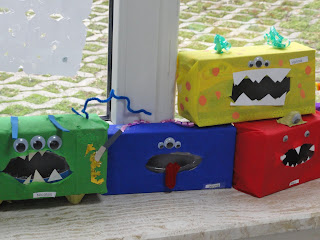 They've been awfully cute to look at in my windowsill these past two weeks. I think I'll be sad when they eat all the valentines and are taken home this week. 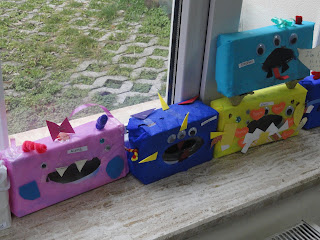 Maybe I'll keep mine on display for anyone who wants to pass me a love note later on! 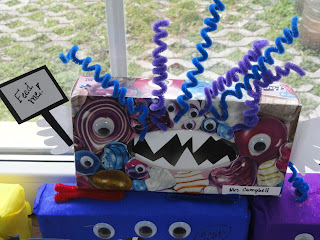 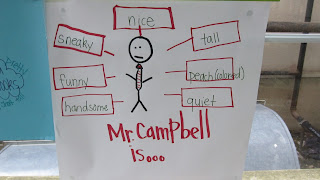 Why I Miss Him

Every year, this time of year, CC has to leave us for a couple of weeks. As much as I dislike it, it is actually good for me. I get a forced lesson in appreciation. I am reminded just how much I love him, how much I miss him, how much I can't live without him. 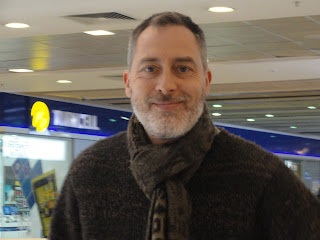 And how much I'd never get to wake up in the morning to find things like this. 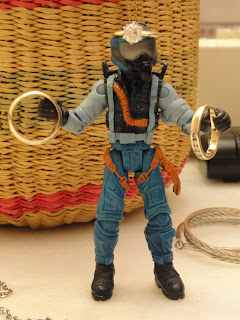 Thanks for the laugh, CC. And now I think I'd like my wedding rings back from Scuba Man. 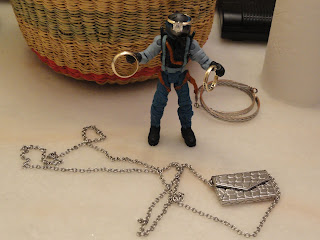 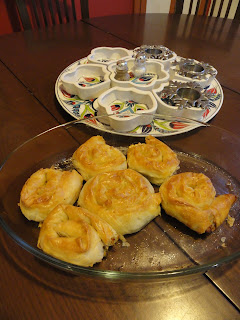 It was beautiful and delicious. That towel may or may not be covering up someone's pre-dinner taste test. 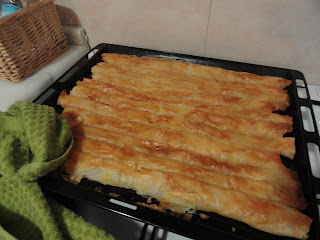 Posted by Sara Campbell at 7:57 PM No comments:

No matter what the kids choose to do to celebrate, they always want a special birthday night just for family. We had some taco seasoning (from Miss N, who sent us a care package) given to Twinkle Toes for her birthday. She graciously offered it so her sister could have tacos...a favorite!

Firstborn made a journal for her sister. 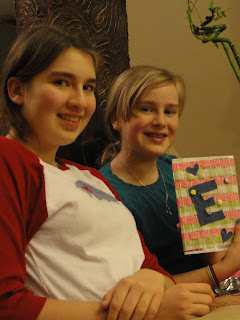 She also got an amazon gift card from one set of grands and a pedi-station from the other! 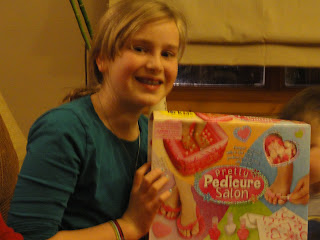 She's waiting on the new American Girl movie on dvd as one gift. She also loved the Tennessee Girl t-shirt I picked up for her last summer. She is a Tennessee girl, who also loves Turkey! We love you! 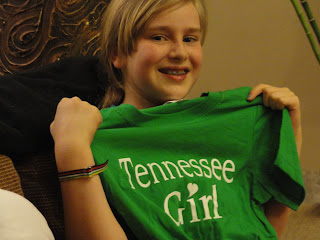 My little girl was just 18 months when we moved here. On January 18, she turned 11! She had the day off of school. How is it that it worked out this year that ALL our girls have a school holiday on their birthday? (Twinkle Toes' fell during a Turkish religious holiday, Miss Middler was one day break between semesters, Firstborn will have hers during Spring Break, and Sweet Cheeks will be living it up during the summer holiday!) Maybe he can work that out every year for them! Miss Middler wanted to go ice skating. I've tried my hand at cake decorating, and I'm just not very good. This year I got the idea to print something off the Internet, cut it out, and create my own stencil with cocoa powder. 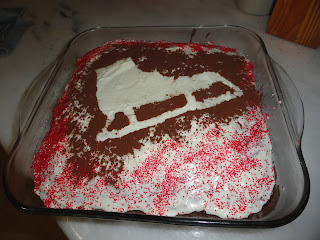 We took her and some of her friends to the mall for pizza and cake. 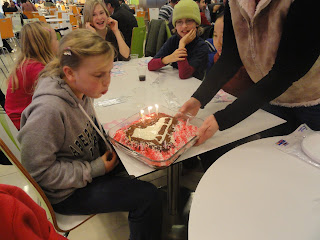 And her adopted aunt! 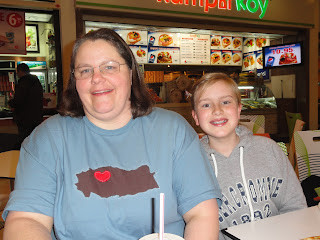 Then we all went ice skating. I tried to beat CC, but he beat me in every race. Just watch out if I replace my blades for 4 wheels! 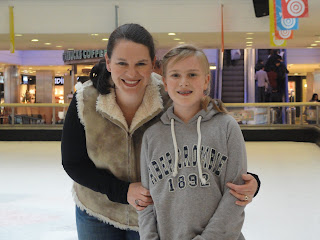 Happy birthday, sweet daughter of mine! 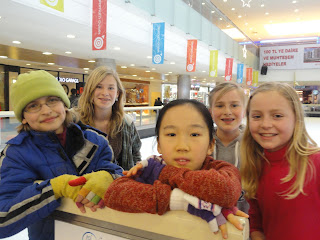 US Embassy Ankara bombing: what I'm thinking about

Well, the news we received that our embassy had been hit by a suicide bomber certainly shook us up. We have had a couple of small explosives thrown into our church, but not when anyone was there. We also had a bomb set off in Ulus (the old town in Ankara), but it was not directed at Americans. This was a first for us. As the Lord would have it, our school had already dismissed as a 1/2 day, so all the students were safely at home when the news broke. We continued to work, but alterted all our staff and locked up the school for the afternoon for extra security.

I keep thinking, though, about this place that was bombed, and how I've been there so many times. When my two little Turks were born, we took them there to receive their official US citizenship and consular report of birth abroad. Anytime we need more passport pages or to update the kids' passports, this is where we go. I know exactly where it happened, it's where I've turned in my cell phone and received a card so I could retrieve it later.

I keep thinking about how when we arrive at the embassy, there are so many lined up outside, wanting visas to the US, hoping for a chance to explain their cause. The guards always escort us to the front, ask if we are citizens, then usher us into this room, this very room where the bomb exploded.

I keep thinking about the guard who died. To have a position at the US Embassy, he must have been a grand guy, someone with leadership, someone who had proven himself all of his life, someone who was kind and helpful and sympathetic to Americans and trustworthy. And his life is over in an instant.

I think this incident has been the catalyst to show me this weekend how very much we are loved and prayed for. The emails/facebook messages just poured in. People from all walks of my life...Indiana, Tennessee, Ouachita, Singapore, Turkey....all reminding me that they pray for us. It was almost like I got a tiny glimpse of the supernatural world to see behind the scenes.

I think it shook up my oldest daughter, too. She wanted to have the "What if...?" discussion. We had told them long ago that Uncle Troy and Aunt Jen would escort them home to the US should anything ever happen to us. She said, "They've moved back to America now. What would we do?" I assured her that there were families here who would take care of them and get them home. I even promised to ask my friend T to be my designated person. She wanted to know what if something happened to me. (They'd most likely still live in Turkey...?). What if something happened to Papa? (We'd most likely move back to the US, and I'd need to teach in public schools to make enough money to support us...?) Would Papa have to remarry? (No, he would not have to. "Whew!" she replied.) There were a lot of questions buzzing in her 13-year-old mind, but things like this make you think. I felt the best thing I could do was to just answer every question in a straightforward way, reminding her that God is in control.

And He is in control. Praise God. Please let it remind you to pray for Turkey. That light would shine.
Posted by Sara Campbell at 9:04 PM 7 comments: