This year our school had an after school drama club for upper elementary. They worked to produce a play called, "Now Ever After." In this play, a cheesy talk show host invites guests, who are former fairy tale characters, and attempts to have them reconcile with each other. Big Ben tried out for the play and landed the lead, the talk show host. I helped him memorize his 58 lines (!) but he did most of it himself. We did explain the idea behind talk show hosts and their incessant actions to keep the show rolling, to keep guests happy, and to come across as insincere. He nailed it.

When he came out in his suit coat, tie, and cowboy boots, hair gelled up, I died laughing. 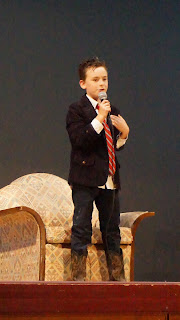 He was so funny and did all the right things to come across as a really convincing talk show host. 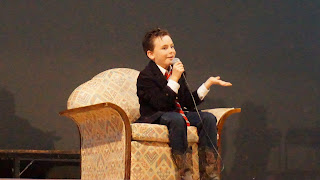 Sweet Cheeks was assigned the role of an old woman, who was continually overcome (in tears) by every guest and every interaction. She burst into tears, unable to finish her sentences. She was hilarious! Here are several guests. The ugly stepsisters no longer wished to be called as such, so the talk show host called them "Beauty Impaired Family Members." Snow White finally reconciled to the Queen once the Queen admitted her unhealthy dependence on the mirror. Cinderella let her stepsisters come live with her, so long as they kept away from her Prince. And the frog finally got his kiss from the princess to get rid of his frog body. 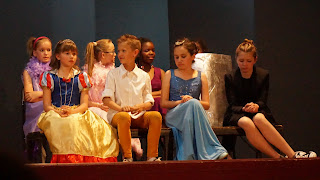 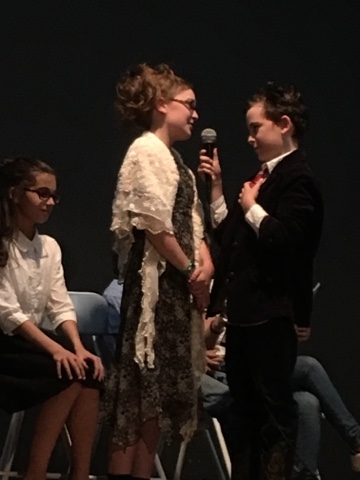 They did great, and we were super proud of them! We were able to snap just a few pictures before Big Ben got the tie off and ran up to the soccer field to kick some balls before we left to go home! 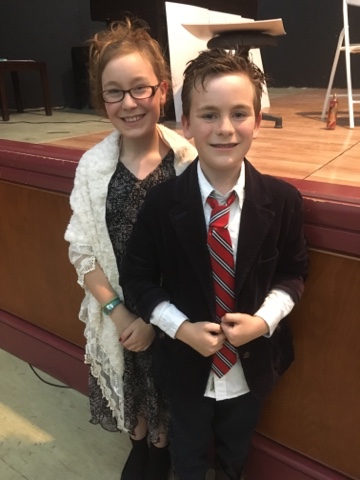 Posted by Sara Campbell at 7:32 AM

I'm so old. I started reading when he was a toddler! I bet the play was wonderful & it's just so fun to see our kids doing new & challenging things - and nailing it!

I have just one regret about this, that I missed it!!!! The amazing Campbell Clan in action!