CC planned our drive to Edinburgh to take us to Stirling Castle on the way. The very kind chap at our first castle visit, Campbell Castle, helped us purchase a castle pass that would enable us to see several famous spots at a discount. The only catch was that it had to be within a certain time frame. When he realized we would not fit into it, he said, "Oh, just tear it off tomorrow, then you will fit in to the discount." This was so characteristic of the Scottish people. I don't think we encountered a single grumpy person in the entire country!

We drove through quite a storm that day, but pulled in ready to see a well preserved and famous castle, home to the Stewart dynasty. It sat on top of a hill surrounded by three steep sides, making in a natural defensive location. It was a combination of architecture from the 14th-18th century. 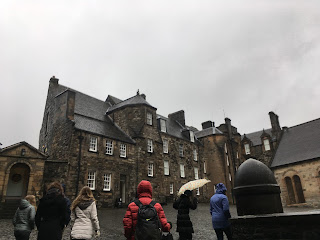 We went into the Great Hall, originally built in the late 1400's. 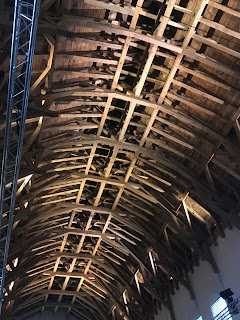 This hammerbeam roof was restored in 1999 to look just like the original. The wood craft was so amazing. I kept thinking of the original construction of these buildings without all the modern technology. 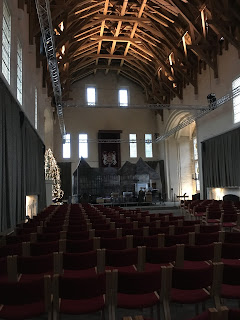 We enjoyed spotting gargoyles. It's so much more fun to see real ones than the ones in art and history books. 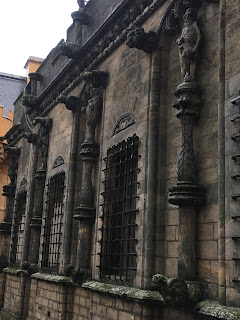 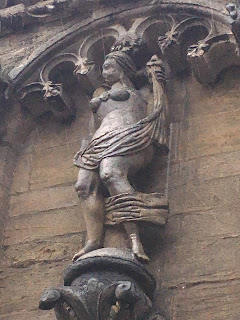 The castle was beautiful and full of "things" as opposed to the ruins we had been exploring. Still, this Campbell Clan has more fun on the ruins, to be honest. Big Ben wanted to pose next to this authentic armor. 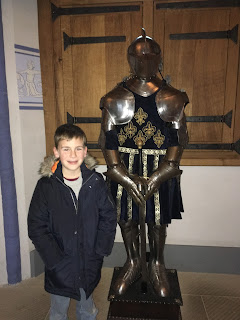 The paintings and tapestries were beautiful. 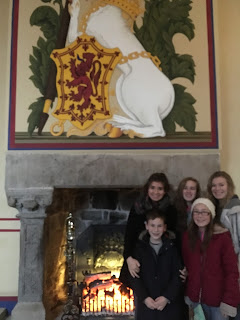 In a couple of spots, there were costumed characters working on traditional crafts. 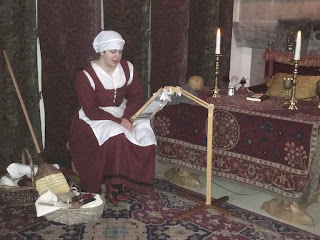 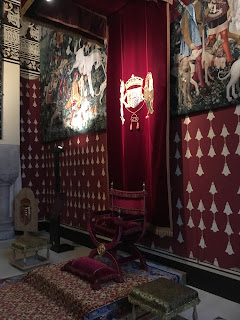 We finished up our tour. Our free guide was a funny and quirky, long white ponytailed guy. I wish I'd gotten his picture. He was thrilled to know we are from Memphis, the home of Elvis Presley. He looked a bit like an old time rocker himself. Additionally, he was impressed when asking the group questions, that at least one member (CC) knew the answers. We saw where Mary, Queen of Scots, was crowned at 6 days old after the untimely death of her father. The stories of her beheading, her last words, the details all became so fascinating when seeing all of this. 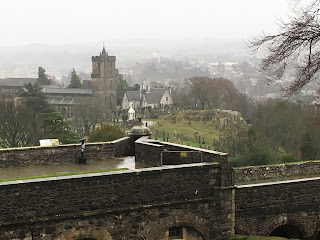 One last stop before we pulled out was to visit the small building called the Argyll and Sutherland Highlanders Museum. It had paintings, medals, uniforms, documents that were so interesting. It was organized primarily by wars. So, we could walk through ancient battles, and it led us all the way to the modern wars in Afghanistan. One of Big Ben's favorite parts was to peek down into a simulated underground bunker from WWII to see a mannequin with his weaponry, helmet, and a pack of cigarettes. There were many heroes in Scotland, and we found the Campbell name listed over and over in lives given for their country and freedom.

Here's Big Ben posing with one of the ancient Highlander Campbell tartan uniforms. I think he'd look rather smart in it! I think if I were chasing bad guys with a bayonet, I'd want to run in a skirt too! 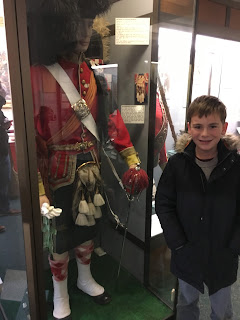 Posted by Sara Campbell at 7:32 AM