A Hodge Podge of Winter Fun

Well, you know, it's not all fun. But this stuff is. Almost all of it, anyway.

Right after our birthday, CC hopped on a plane to go to the US to recruit, participate in annual meetings, and share about our awesome school. I got to watch him via livestream, and here's a screenshot of it. He concluded by reading a valentine made by Firstborn, handed to him as he left. She mentioned how she wished all the potential teachers there could see what she sees...that Turkey is not a place of unrest and danger, but it is home. I was so touched to hear him read it, as I had not yet read her card. 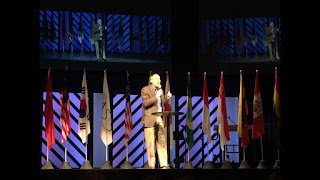 One day just for kicks, we let the boys' team scrimmage the girls' team. That's one way to work up a sweat....either trying to keep up or trying to prove how good you are! 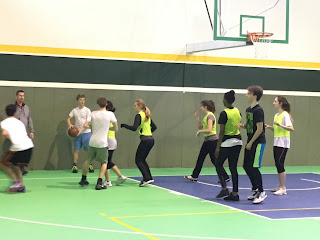 When we moved into our new campus, scads of odds and ends, most of it trash, were left behind. But Firstborn found one treasure that was being thrown in a trash can. It was a piece of art done by a student from the former school. An oil pastel of a Turkish village scene and a treasure to her, I decided to get it framed for her to take with her when she moves on to college. This was a sample frame from which I could choose. 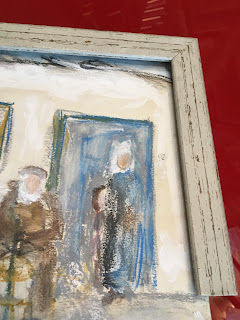 My friend T had a surprise birthday party, thrown by her husband and a few friends. It was a bittersweet night because only a few people there already knew that she would be moving to the USA in the summer. I was one of those people. It wasn't an easy night, and it won't be an easy goodbye. 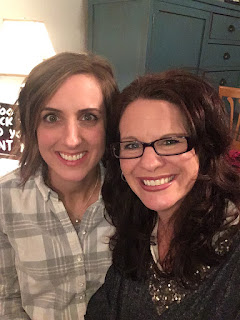 I let the kids have a Valentine's party. The younger kids invited a friend each, and the teens invited a handful. We ate, watched a movie, then played a charades game on my iPad. It was a fun night, and I'm thankful for their good friends here. 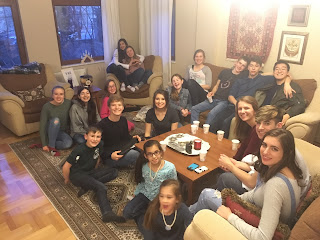 And then, the next weekend...ahem, Firstborn was asked out. We tried to be calm. We tried to act nonchalant, but here's a picture of the kids spying on her as she got in the car. I've known this boy since he was just a kid. There was no hesitation on this one. Yes, you can go. 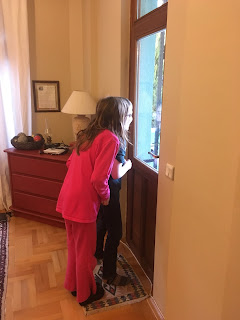 And I just had to snap this from my vantage point. She's all decked out in jeans, a suede jacket, and a boot cast (from an old soccer injury that just wouldn't heal until we finally immobilized it.) 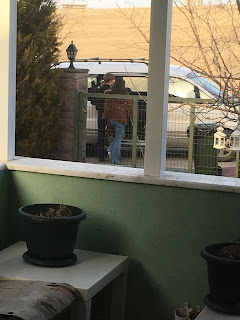 While CC was gone, we had a game night and played one of our favorites, Chinese checkers. Why this simple game entertains us so much, I don't know, but we play it often. 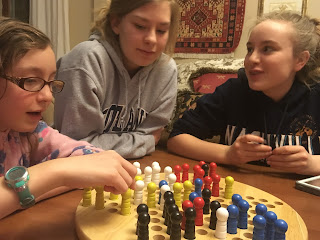 One Sunday afternoon while CC was still gone (2.5 weeks!), I took Big Ben and Sweet Cheeks out for lunch and let them pick whatever they wanted. One got honey filled gozleme. The other got chocolate filled. Oh well, I said pick anything. I even let them get Fanta, a rare treat. 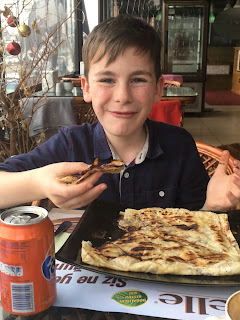 Posted by Sara Campbell at 3:16 PM

I admire all of you!!! Happy Birthday to all and congrats on the wins in basketball and soccer. Love lst born all you can , she will be missed I am sure and she will miss her life as w.ell. Take care and go with God. Blessings on your and your family