And finally the big tournament day came. The girls would play 5 games in a matter of 24 hours. We beat the French School, Pakistani School, and Dept of Defense School.  But our biggest competition of the day came from a premier Turkish/International school in our city called BLIS. Do you remember those gals that we beat in the soccer tournament last year, who had never lost? Remember when we won it in overtime penalty kicks? Remember they were so mad, they refused the 2nd place trophy? Ok, it was this school. Originally this team was not permitted to participate in our basketball tournament because of previous incidents of misbehavior. However, the new director contacted CC and requested another chance. CC asked him to have a meeting with coaches and players and remind them of the behavior factor, then gave them one more chance in this tournament.

My first clue of how the day would play out came during an early game before the finals. A gal got a technical for using a very foul word. Then when the finals came, and we were both playing for first place, our head coach was finishing up as a ref for another game. In the meantime, I asked our girls to stretch out and take a couple of laps around the gym. As they jogged by the other team, their head coach who reminded me of some 30-something rapper wanna-be, called out to Firstborn, leading the lap, and told her to get off his side of the court. (We were running around the exterior.) She had the girls finish that first lap, then came to tell me. That's it. Gloves off. I walked up to him and said, "Don't talk to my girls. Ever. You got something to say? You say it to me." He started back about his reasons, and I just repeated. "Stay away from my girls. Don't do it again." That boy never saw a Mama Bear, but I was fixin' to give him a good ol' Southern whippin. I truly was not pining for a fight, but he was totally inappropriate to disallow them to run around the exterior of the court during warm up and to address them directly in an intimidating way.

As the game progressed, the tension only rose. The same gal who had a technical called on her in an earlier game flipped Twinkle a double birdie. This gave her the second technical of the day, which by our tournament rules, means she is out the rest of the day. She was their star player, so this made the team and the coach even madder. They responded with using foul language to the refs and committing more on court fouls. One of our refs was a good ol' boy from Mississippi, on staff with us. He just calmly called technical fouls, then eventually kicked the coach out of the game.

Meanwhile, we continued to coach our girls to ignore the drama and play good basketball. We told them to rise above. Sportsmanship is one of our 5 core values and is the final "S" in OASIS. It's big for us. After games, our cheer as a team is always, "Good game,________" and then the name of the other team. We encouraged the girls to just ignore and not respond.

At this point in the game, the team had been given 4 technical fouls, which meant 8 free throw shots. Coach picked Twinkle, who has a pretty consistent free throw shot. She stood on that line, and as long as I live I will never forget watching her. There are times you see them all grown up in their adult bodies, but you flash to when they were 2, sitting on a bus bench, swinging little legs. Hiding in the laundry hamper at bedtime. Being carried into the operating room by the anesthesiologist who is telling you, "I have a little girl like her at home. She's going to be ok." It all came back. And all I could see were those braids. The fans for the other side were yelling all manner of nasty stuff. Booing, mocking. She focused her eyes on the goal, and made nearly every shot. Those braids swung around after the first goal, and she flashed the opposing fans the biggest grin and wink she could muster. And that response to that situation, is what sets our school apart. I had a parent tell me that a parent from the opposing team commented that our school is always different.  How we behave at games, how we don't let our kids yell during free throws, how our kids pick up trash before we leave the stands, shows a difference. 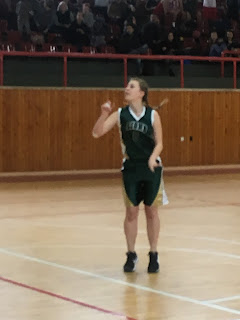 It got so bad at one point, that the refs considered calling the game and giving the victory to us. But they asked us what we wanted to do. We voted to finish the game. We wanted to win fair and square. 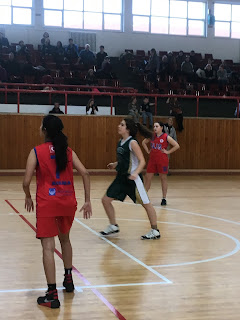 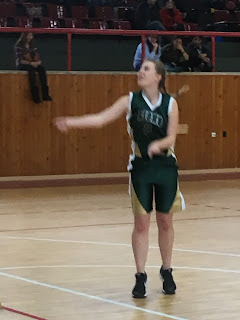 And we did. We beat 'em. And when our fans went wild cheering for us at the end, we could no longer hear the mocking. 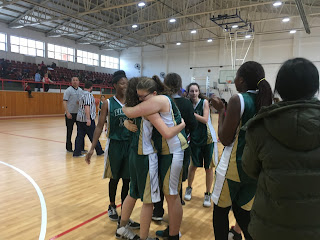 We sat the girls down after the game and debriefed a bit. What came out of them was not what the other team did or the stressful situation, but what our own girls had done for each other. There were a few tears. There were a few comments like, "Though we are from all over the world, we pulled together. You are the best friends I could ever have." Lots of hugs. Lots of laughter. I'll never forget it. 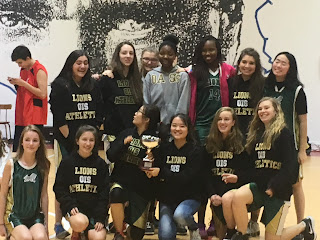 These seniors played their last game. And what a game to end on! 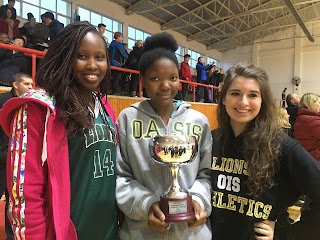 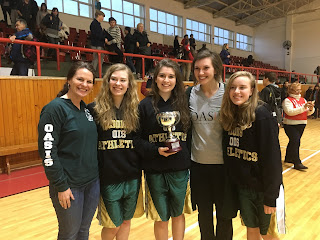 I'm so proud of them! 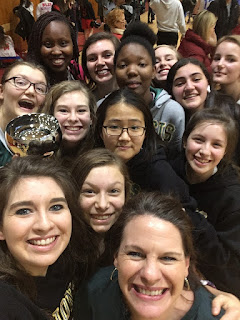 And they earned their hamburger and fries afterwards. Please note I pretty much have the only girls on staff. The after events aren't nearly as much fun if the girls don't show up. How could I say no? 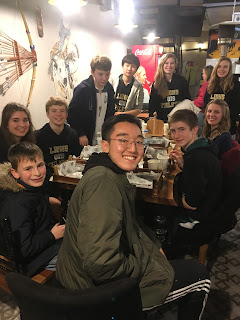 Posted by Sara Campbell at 8:06 AM

Too bad the visiting school blew the second chance! What an embarrassment.

OUTSTANDING!! Love it! Times like this are when you know you're doing a good job and all the effort is worth it.