We really are enjoying our new phase of life, where the kids are old enough to go and wander and explore on their own. We even felt comfortable letting them do this in Cappadocia, though it is not our home town. CC and I would linger over a cup of Apple Tea, while the kids ran to find their own adventures at times. On one such day, they returned with the most enormous bullfrog I have ever seen in my life. They had him in a 2 liter bottle and he took up the entire circumference. We properly greeted him, then explained that he could not come back in the van with us. "How about a couple of fish eggs instead, one for us and one for Miss B in first grade?" I suggested. They came back with (we estimate) 700 fish eggs. Giggles and explanations about how hard they were to separate all ensued. I certainly did not want to reach in and disturb them, so we set up a little frog nursery right behind the van until they could hitchhike a ride home with us. Those hearty little guys all survived the night.

Here's Firstborn on our ride back....instant coffee in one hand, frog eggs in the other. Such is the life of a 13 year old! 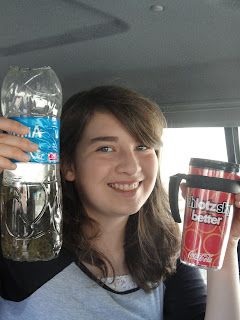 Well, of course, if your child brings home baby frogs, they are going to need fresh spring water to go with it. We made a slight detour on our way home and let her traipse back into the wild to get a jug of water. 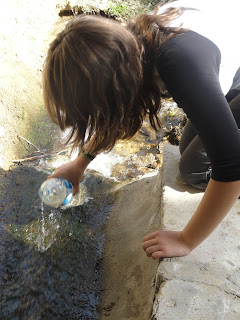 We at first instructed her to hold the (open) bottle of fish eggs between her feet and "Just Don't Forget and Move!" Then on second thought, CC and I decided to babysit them up between us in the front. Keeping them upright between my purse and the gear shift was decidedly better than the constant fear of Firstborn "forgetting" them and gelatinous frog babies all over our van carpet. 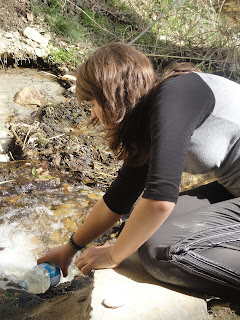 We came home and put the babies in a strawberry container. 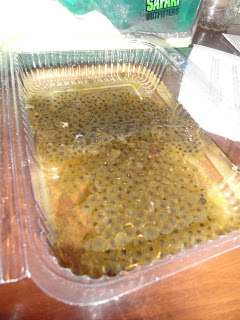 And then we began transporting them to various habitats....one that Firstborn got for her birthday and two others found on the street (empty 5 liter water bottles), because of course every bedroom needed its own habitat. Still, we had disposed of none (all except the 3 that slid down the kitchen sink as we poured them into containers. (I felt terrible, I really did. I am pro-life, even for frogs.) 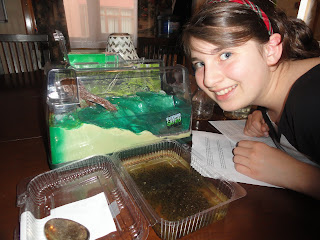 And we began the process of watching God's creative metamorphosis of frogs. And every thing in the house began to look like frog eggs, even the raspberry jelly at breakfast. 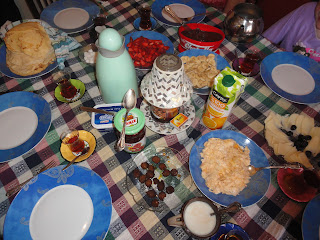 Posted by Sara Campbell at 9:10 AM

I laughed and laughed. That was one of the funniest posts you've done.

Oh my. I do remember the days. But, I don't think we ever had frog eggs . . . Kathleen would have loved it, but we were not blessed with frogs.

That is so funny. I would have had nightmares out the wazoo.

Oh my goodness. Eeew! and Cool! I look forward to seeing their progress.

Funny! I just love Firstborn! She makes me laugh. Haha. Thanks for your encouragement on my post ;)