Capturing Cappadocia: Ride the Hair Off That Ol' Horse!

We've been to Cappadocia many, many times, but we've never ridden horses. This year we decided to treat the kids to a horseback riding tour. Here they are, spotting which horse they might get. 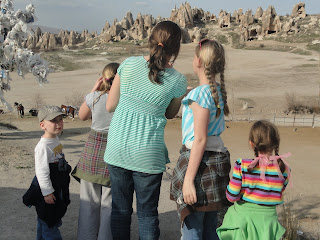 I love my beautiful girl! 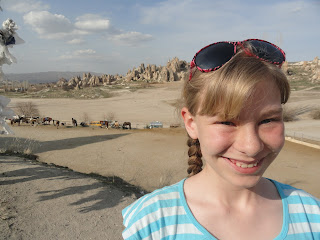 This was our terrain. Amazing, huh? 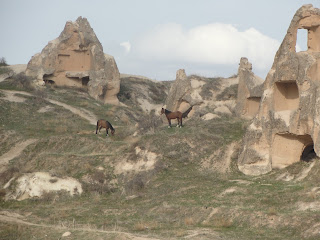 This was the cave office of the horse guides, all from Afghanistan. 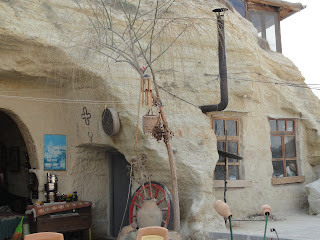 We had at first thought we'd get five horses. CC would take Big Ben. I'd take Sweet Cheeks. We quickly realized that the saddles were too small and the terrain too hilly to let them go with us. Hmmm, what to do? I thought of maybe not going. But our new Afghan friends insisted on taking the two little Turks for us while we rode. 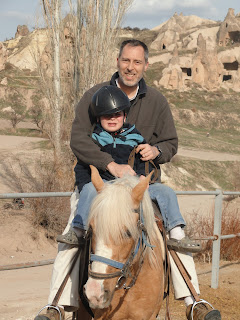 Something I never would have done in America, but I left them with complete strangers for an hour, without a concern in the world. They later told me they got all the free apple tea they wanted, and Big Ben said one guy had a "Me-Mote Helicopter!" 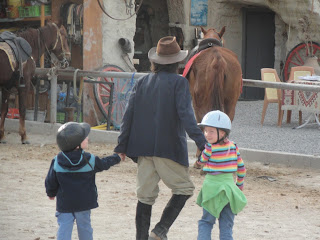 And so off we went. Our guide held Miss Middler's horse with a rope. We soon learned each horse had its own thoughts about how the tour would go. It was not the Shelby Farms, Memphis, TN, path where each horse just follows the route, then gets treats! 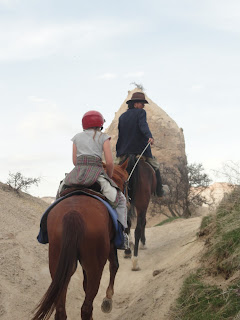 As you can see, it was steep in parts. 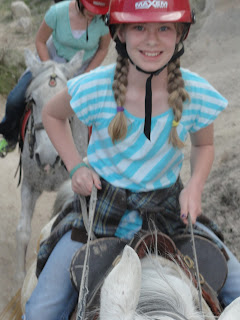 And the absolute best memory of the entire trip was right here. The horse CC got was a muncher. He stopped at every possible place to eat. But then he didn't want to be left behind, so he'd bolt to catch up. If only only only I could have taken a picture, holding the camera behind me, while riding up a craggy hill on a horse, you could have seen the look of sheer delight on CC's face every time his horse picked up speed. I later asked him if he was just unable to make the horse keep going and prevent him from eating. He sheepishly said, "Oh, I thought I'd just let him eat. Besides it was fun to go so fast!" 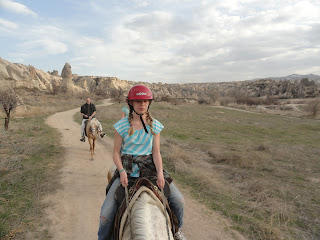 Firstborn's and Twinkle Toes' horses seemed to be "at each other." Kicking, snorting, gritting teeth. Hmmm, wonder if they were sisters? 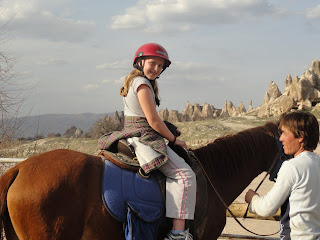 When we returned to the ranch, my sweet little Turks were fine. They then got to have a horsey ride within the corral. 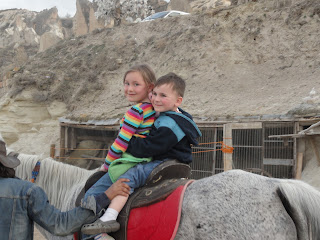 Miss Middler made a very good friend. This sweet man chatted with her the entire ride. They became big buds. When he first heard we were American, he told CC thank you over and over for helping his home country of Afghanistan. People who say thank you always endear themselves to me. 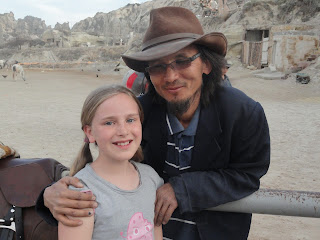 It was the very best part of our trip. Come on, we'll take you! 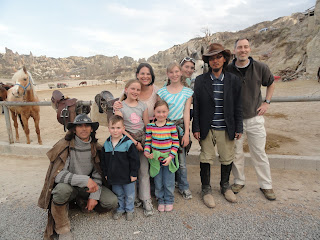 Posted by Sara Campbell at 8:43 AM

Sara,
As a military wife whose husband and friends have deployed, that man's statement means so much to me and I'm just in tears. And I'm so thankful for people like you and your husband who are ambassadors abroad, too.

Thank you for sharing!!

I was wondering why I kept getting hits on my blog from yours, and I just realized you linked me. :) So thanks!

1. The horse stories . . . Made me remember my "training" by David, who I unashamedly say is one of the best horseman and horse trainers I have ever seen. (It's okay. You married a lawyer. I married a cowboy. There are advantages to both - ha.)

2. Love the country of Turkey and the way they treat children. What a wonderful and blessed thing. I feel sorry the way those things have deteriorated here.

3. Best of all, love the comment about the man being thankful for America. He is so right. Long may we be the land of the free and the home of the brave!

Love you all and God bless you!
Melanie

P. S. And that really is some awesome terrain, isn't it? It boggles the mind.