As the week crept closer to Christmas Day, we continued to enjoy just being together. We walked in the little neighborhood every day. It became cozy and familiar. We were told about these discount shops called "China" and found reasons every day to go, even if it was just for dish detergent. I noted on one walk that a building was named my daughter's name. 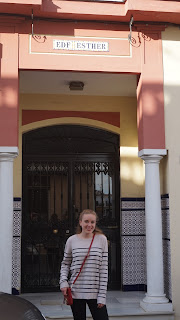 One priority we certainly had was to meet up with some of our old friends from Turkey, now living and serving in Málaga. Their kids graduated from our school, and they were faithful supporters of all we did in starting the school. It was just so good to hug them and enjoy a meal together. 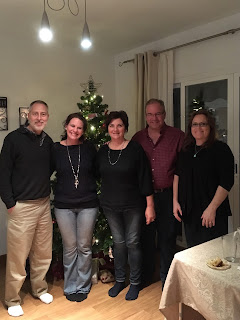 I had also researched any concerts or ballets in town for the time we would be there. We really don't have access to much of that, so we try to find things when we are out of the country. Sadly, The Nutcracker would not be in town, but I did find Handel's Messiah. I went online and bought us tickets in the nosebleed section! Little did I realize just how much that night would feel like "Spain time." Everything here opens in the morning, closes in the afternoon for a siesta, then reopens and stays open until late at night. The concert started at 9PM. 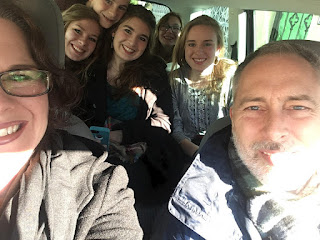 We met our friends from our home church and walked downtown some. 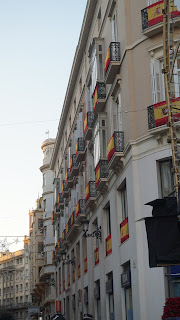 It was so interesting! This is not a statue; it's a person! 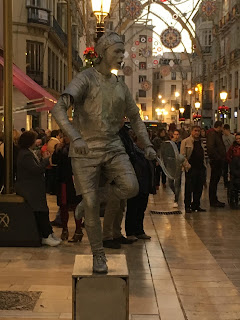 While downtown, we timed it so that we could see the 6:30PM "light show" set to music. While in Scotland, I saw that there would be a light show, so I kept it secret and just managed to get the family to the right spot when it would start. Little did I know that when the lights and music began, it would move my kids so much they started to cry. We just don't hear Christmas music in Turkey. I didn't realize how much it would mean to them. So, I knew we wanted see this. They first played "Joy to the World," which is one of my favorites. I especially love the line, "He rules the world with truth and grace; And makes the nations prove, the glories of His righteousness and wonders of his love." Indeed. They ended with Feliz Navidad, which was so fun. 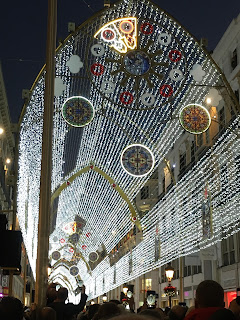 Here are the kids and their new friends who call this city home. 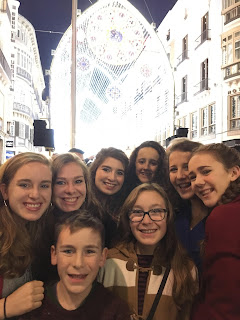 After the lights, they took us out to try paella. Wow. It was tasty, but so very different. CC said it is a lot like a trail mix where you have to not just throw a handful down your throat. You have to make sure there are no parts with shells. This was a tasty rice dish with the day's catch throw in, so you would occasionally find a clam shell or a big prawn with the head on. 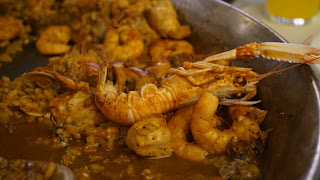 After dinner, we went to the concert. About the time it started, we all got sleepy. About five minutes in, Big Ben and Sweet Cheeks were sound asleep. I realized that night I have only ever heard "portions" of The Messiah. This was the full one. It went until midnight. Yawn.
Posted by Sara Campbell at 1:46 PM

I love this. Praying for you.

I love to read about your family’s life journey. But I never comment. Since you have not blogged I thought I should tell you how much I like your blog. I pray your Family is well and safe.