España Experience: Why and How

Our plan from nearly a year ago was to buy Firstborn's tickets from Turkey rather than the US...way cheaper! So she would always originate from Turkey and the return would bring her back. Then we would send her off again with a return 6 months or a year later. So, her Christmas airline ticket to see us in Turkey was simply the return from her June flight to America when she started college.

For the first time, she would not be entering in to the country on our work visa status. I asked our vice principal who helps us with all of this, and she said, "Yes, buy her the tourist e-visa." That I could do. So, I typed it into my phone on a to-do list for first thing Monday morning (I wanted to do it at school in case I had questions for her.) I woke up at 6AM that Monday morning and read a post from a friend that visas between the USA and Turkey were on a temporary ban.

This affected not only us, but many of our friends wanting to get their college kids "home" for Christmas. We all felt in a few days it would be lifted, after Turkey and the USA sorted things out. A few days turned into a few weeks, which turned into a few months. Several were suggesting that we try a work-around attempt and fly her into a country in Europe, have her stay a few days, then attempt to get a visa into Turkey from there. It worked for some. It did not work so well for others. There were no guarantees.

We weighed our options. If it did NOT work, we would have a kid stuck in Europe. We would need to buy last minutes tickets there (more expensive). And we would no have no place to stay lined up. About that time, I mentioned it as a prayer request on Facebook. I simply said, "We aren't sure what to do. Would you pray that God would make a way for us to get her into Turkey OR a place for us to meet her elsewhere?" Within 24 hours, I'd received a note from a friend who is associated with our home church, which said, "Do you want to come to Spain? I have a house for you." We took that as a gift/solution from the Lord. I was able to reroute her from Turkey to Spain without extra fees (because of the visa ban and because we did it within the month of November). We had graciously been offered a home to use while we would be there. All we would need to do it buy our tickets to Spain. Miraculously we were able to find inexpensive tickets on the very day she would be arriving in Spain (it's cheaper to fly country to country over here than within the USA). And as a mom, I can think of nothing I'd rather spend my Christmas gift money on than an airline ticket to see my daughter and the ability to all be together.

So, school let out, we came home, and we woke up at 3AM to head to the airport. 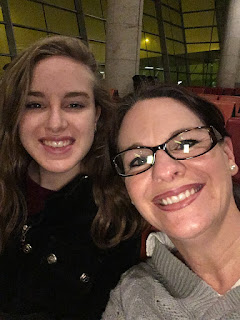 Big Ben wanted to be my seat buddy for my shoulder to sleep on and my iPad to borrow. 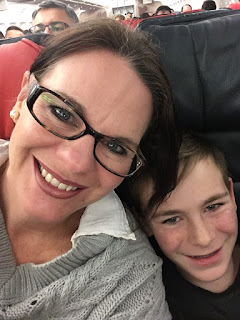 We arrived about 3 hours before Firstborn. We tracked her flight and knew she had landed. When the kids spotted her, they ran into her arms. 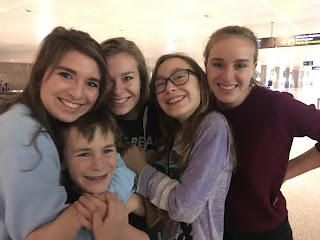 And then I gave her the hug I've been waiting to give her since August! 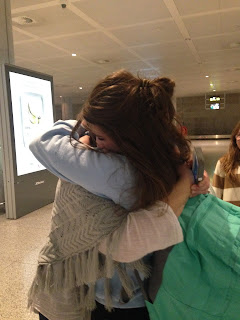 We would have taken ANYTHING, anything offered to us. We just wanted to be together. The house we were given to borrow is the bottom right half of this. It's beautiful. 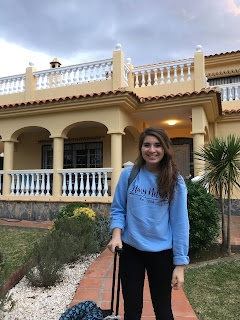 The first night we were tired, hungry, and happy. Our friends from church left us a welcome basket and a pot of soup. Nothing tasted so good! 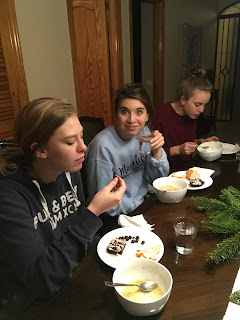 And nothing felt so good as the hugs and being back together as a family of 7. 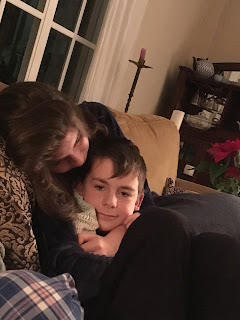 Posted by Sara Campbell at 4:28 PM

So happy for you all!