España Experience: The Fountain of the Lions

At some point prior to coming to Spain, CC remembered that he had done a report in elementary school on the assigned country of Spain. For CC, elementary school was in the 1970's. As this era was prior to the Internet, he researched his information in encyclopedias. There was a picture of something in The Alhambra in the encyclopedia article, which he used as a basis for a drawing he did. He felt that if we went to The Alhambra, he might even remember what he drew. As he glanced through the brochure, he recognized it. "I know what it was. And I know where it is. It's in a building called "The Palace of the Lions." He decided it would be our final stop (as it is really the most amazing of all the buildings).

We got to the entrance and were denied entry, as the ticket clerk stated that when we purchased our tickets, we were assigned a certain time to see that one building, and we were long past it. Indeed the exact same thing happened to the family before us. The fine print on our ticket did give us an assigned time, but we had absolutely no idea, as there were scads of buildings to see and it was not specifically mentioned when we bought our tickets. She would not budge. Disappointed that he would not see the "one big thing" of the entire grounds, he deposited us at the grounds Cathedral (and we did not complain about sitting for the first time all day and being among statues of Jesus) and quickly hiked all the way back to the front entrance.

He returned and said, "Let's go!" The ticket agent would not budge, until he said, "We traveled a long way to see this. ¡Por favor!" He pretty much can't be refused (at least not by me) when he talks like that. So, she reissued the tickets and grumpily sent him on his way. He did a Turkish gesture of humility by kissing the tickets and placing them against his forehead, which of course, she had absolutely no idea what he was doing. We've done all kinds of Turkish things here, and I am quite sure we look crazy. Anyway, we hustled there, and our speed was well worth it.

Every wall, every ceiling, every cornice was carved in this beautiful Moor design. 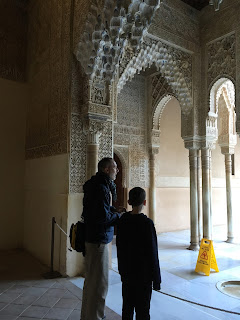 And then we came to the Fountain of the Lions, what he had drawn when he was about Big Ben's age. 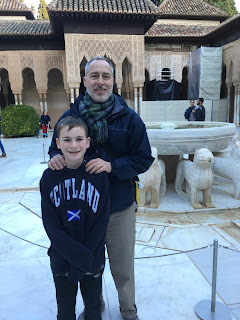 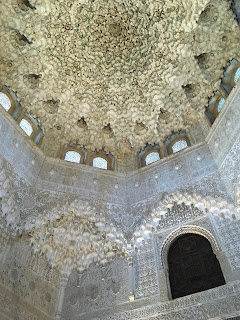 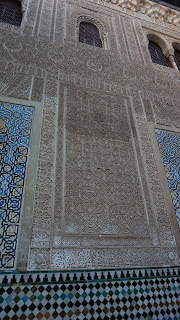 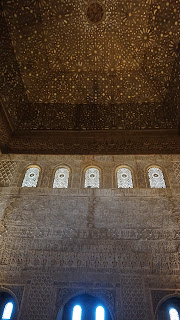 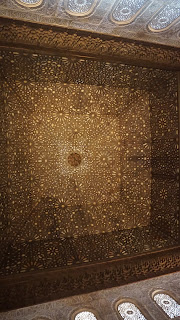 It was the perfect ending to our day, and we were all happy that Papa was given new tickets and could show us the actual place he had drawn about 42 years earlier! 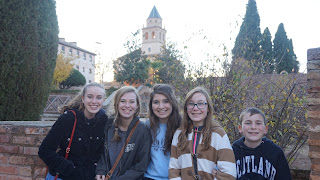 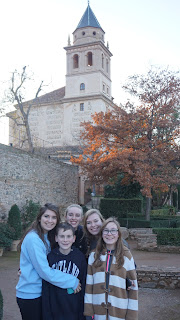 I really had no idea what to expect in Málaga except that it was a beach town. I heard there were day trips nearby, but the bounty to see within just an hour or two away has been a joy!
Posted by Sara Campbell at 12:15 PM