We certainly did feel warmly welcomed in Spain. Just getting to sit down at a table all together, going for walks, buying groceries...it was all wonderful, as we were able to be together. 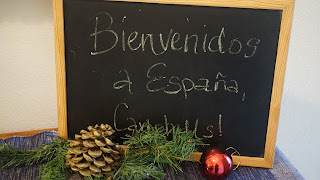 Soon, gifts began to appear under the little birch, as luggage was unloaded and gifts were carefully wrapped. 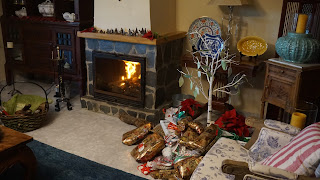 We were told by our friends that we must try "churros." So, early in the morning we headed out to the local churro shop in the neighborhood. 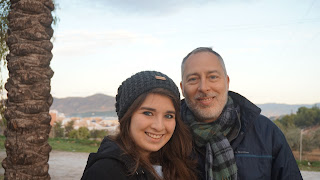 In summary, it is the Spanish version of a doughnut. We ordered fourteen, and churro guy squirted batter into his vat of oil. 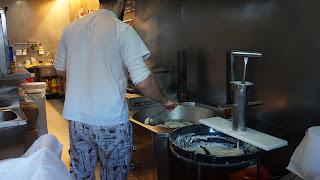 They were all lifted onto the same skewer and a little jug of chocolate sauce was sent with us. They were delicious! 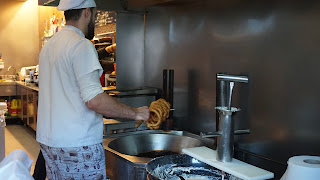 Once we knew we were coming to Spain, we decided to let Big Ben attend a professional soccer game as part of his Christmas gift, and CC offered to take the girls as well. We tried to buy tickets online, but the system kept kicking us out. So, he drove down early and walked up to buy tickets. He ended up buying tickets from some Arab guys hanging outside the stadium. The girls were saying, "Papa, don't trust them!" but they ended up not only selling him the tickets, but also getting him through the gate in the correct spot to find his seats. All said the game was exciting, with lots of over-exaggerated injuries on both sides (including one guy who was no where near the scene of the penalty), lots of cheering, and lots of fun. Malaga didn't win, but they certainly had four Turks cheering them on! The game started at 9PM, so some power naps helped to get them on the night life schedule of this town. The rest of us promptly went to bed about the time the game started!