Israel: Can Anything Good Come Out Of Nazareth?

Our only other stop for the day was Nazareth. We had opted not to go to Bethlehem, due to the fact that it is in the West Bank (not so much because of where it is, but because you have to visit with a tour bus and a massive church is built upon the spot where they think the cave is, not quite the humble and holy experience of 2000 years ago). But we did want to make it to Nazareth, so near Galilee. 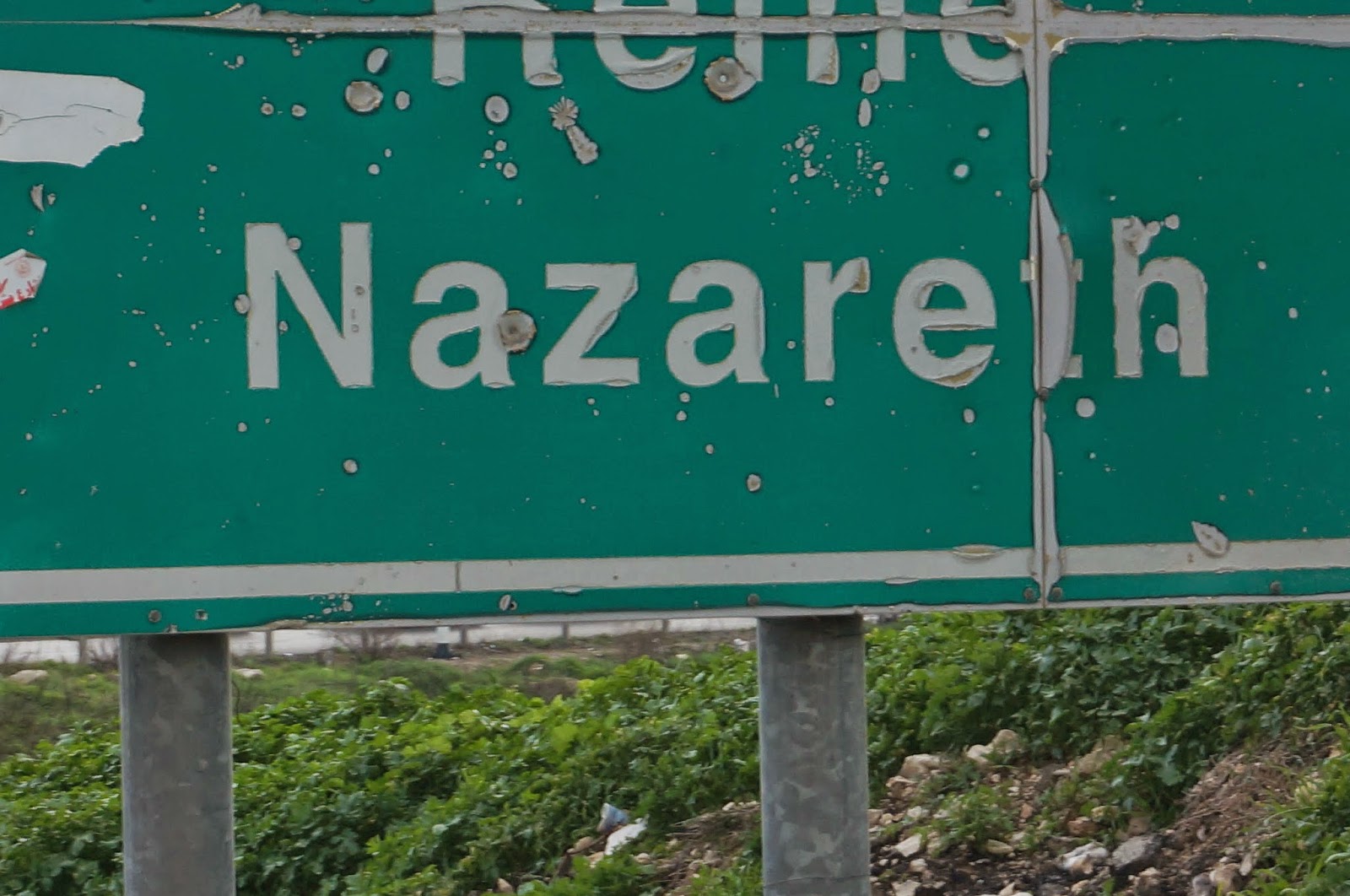 On our way, we drove through Cana. 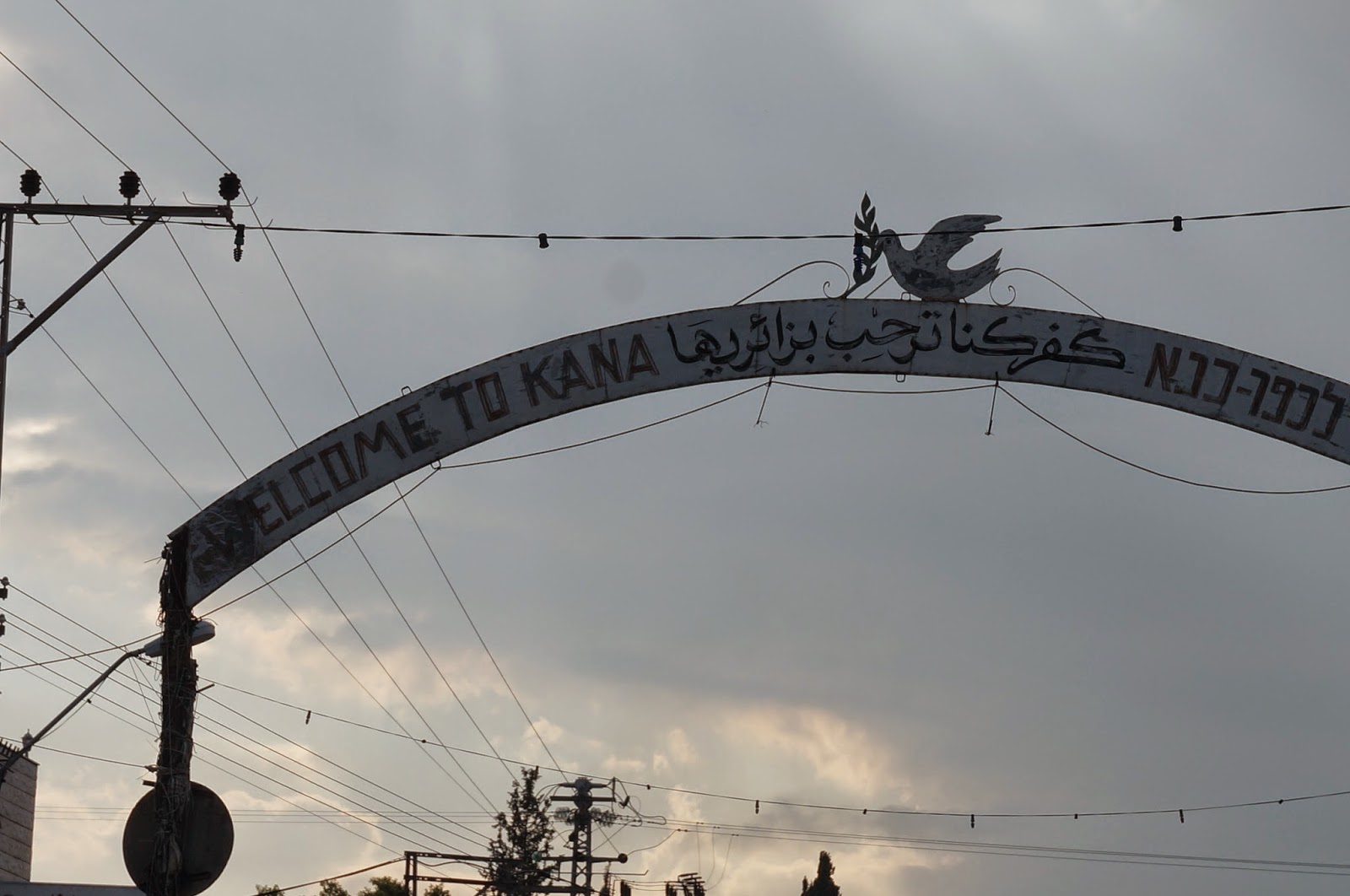 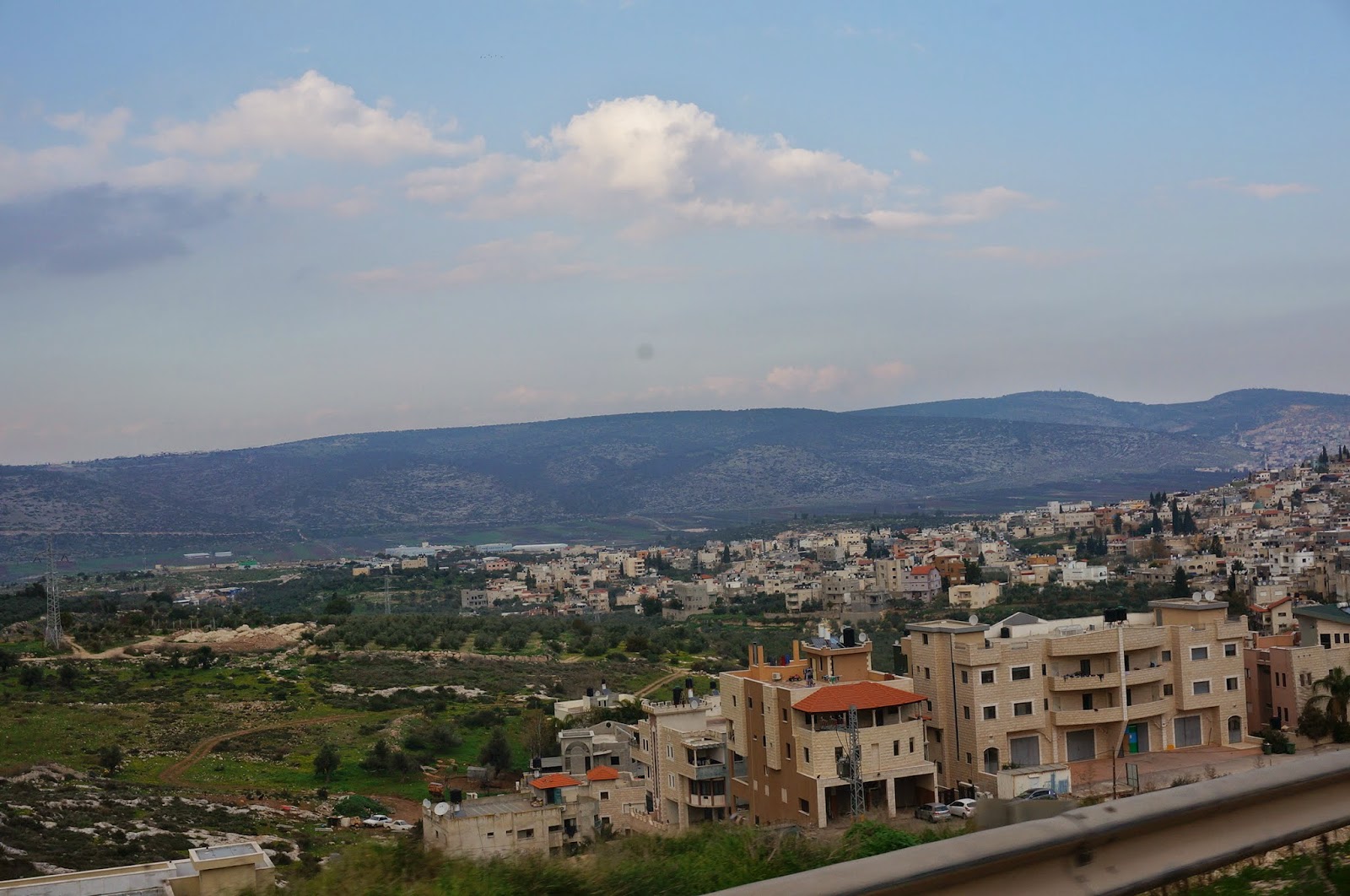 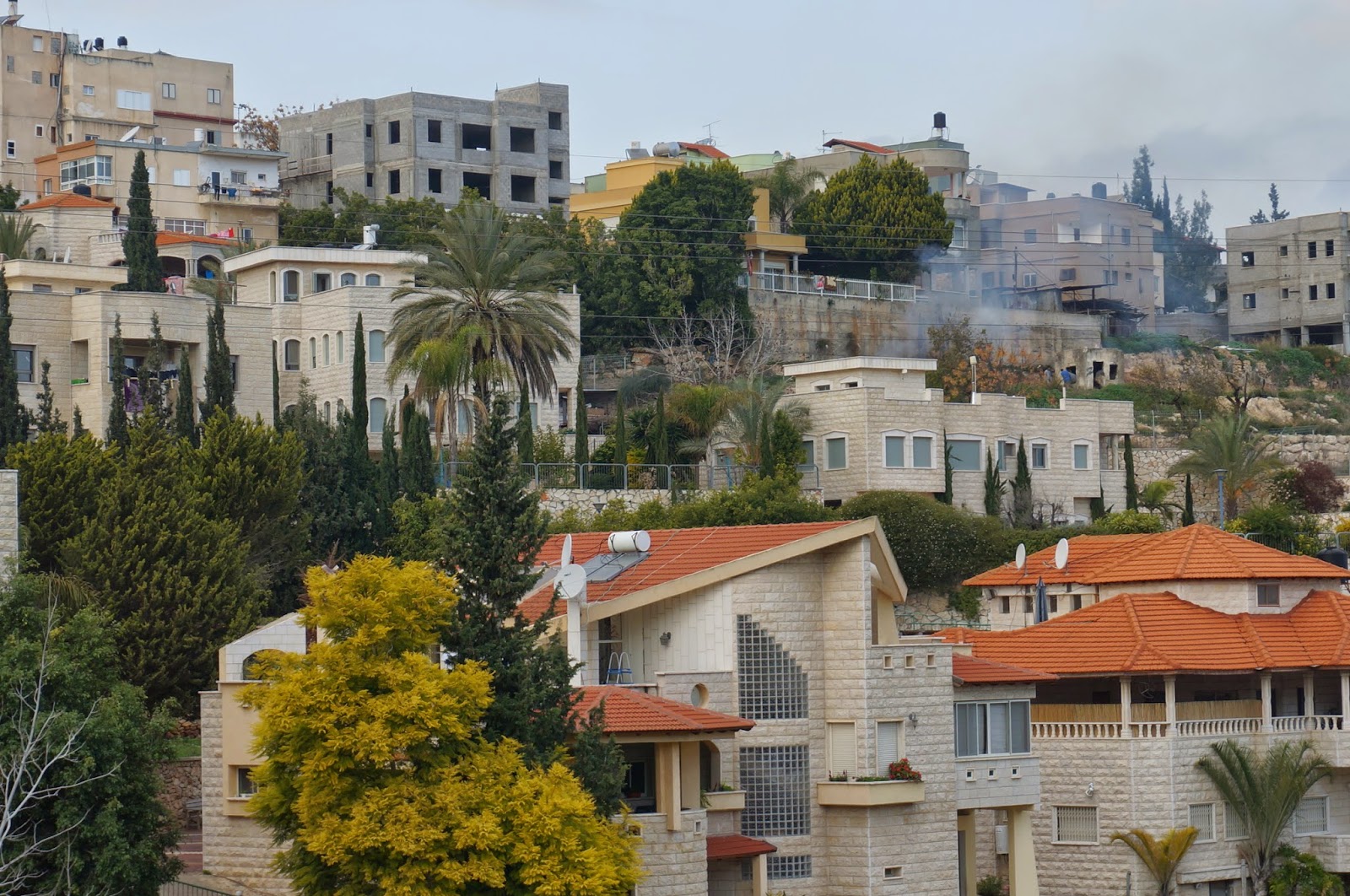 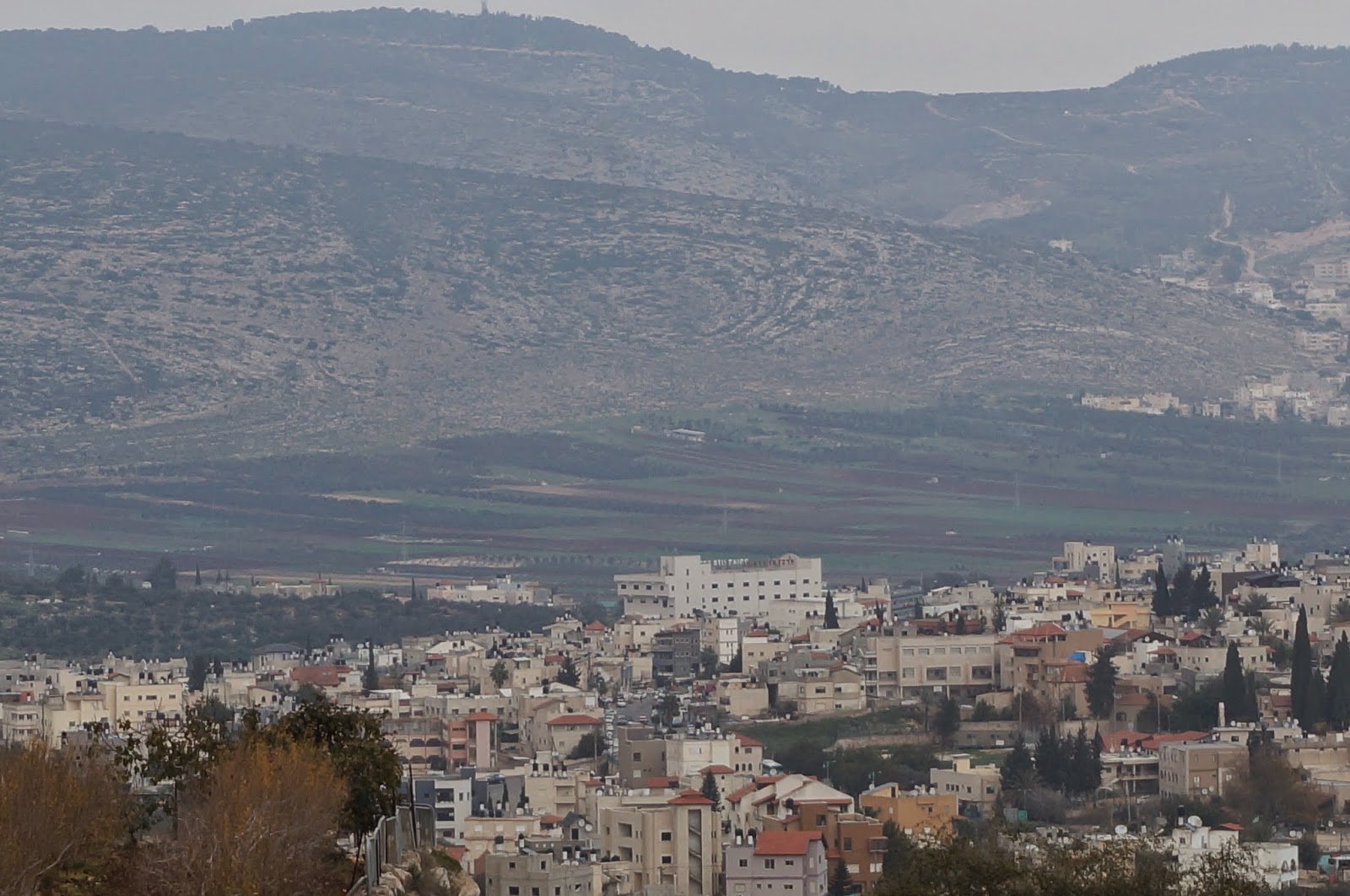 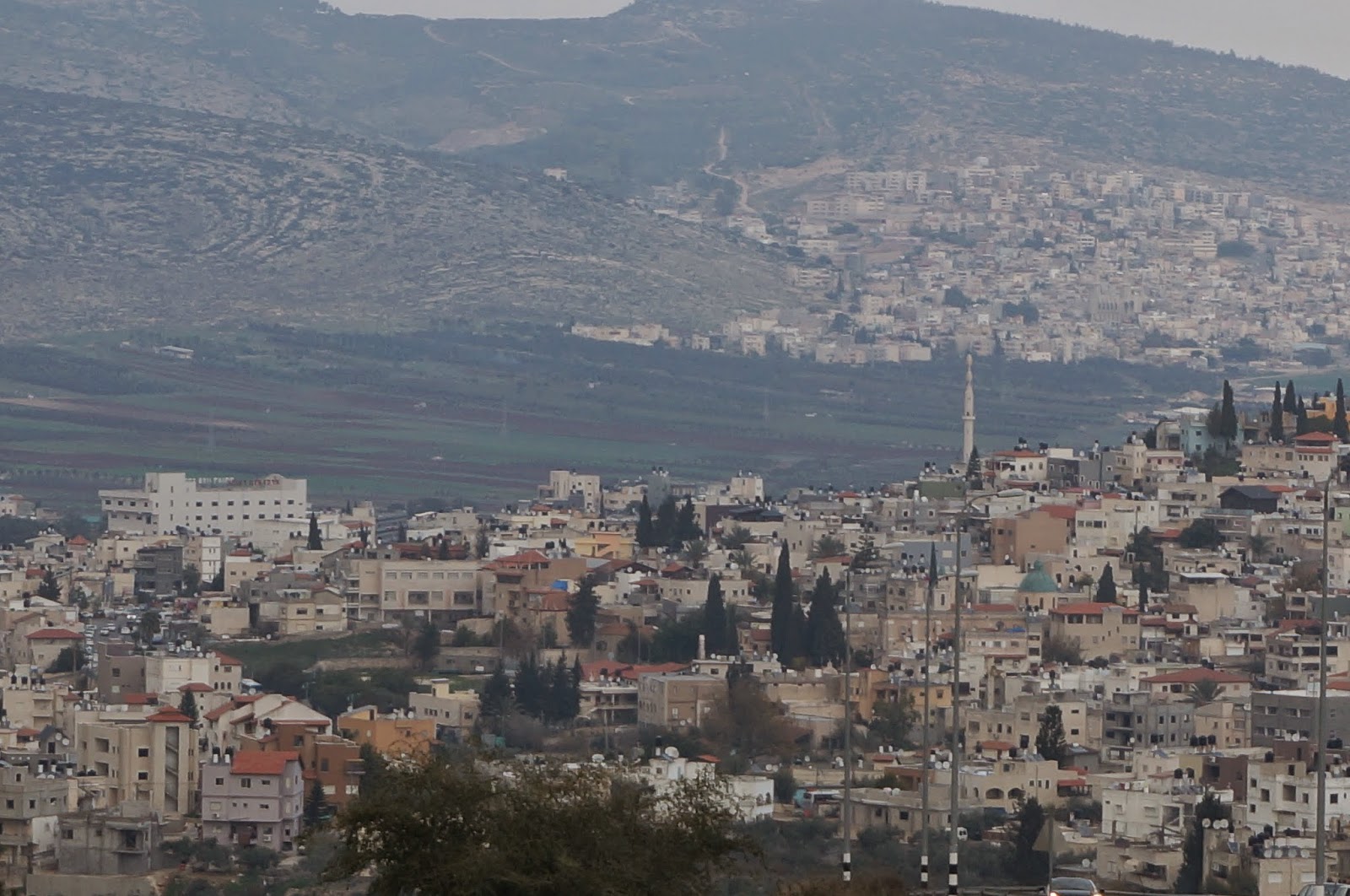 My impression of Nazareth was different than all the other places we visited. It had become an Arab town. The Hebrew script disappeared to make way for only Arabic script. The signs to Nazareth got us so far, then there were none. We ended up needing to go one direction, based on the information from the local we stopped to ask, but had to go down a back road to get there. Soon, we were in bumper-to-bumper traffic, on a road just wide enough for the two directions of traffic. We began to see the other side of life. Not buildings. Not archaeology. But people. We crept so slowly that we could peer into barber shops, homes, into the life of this run-down town. The roads were so curvy and bumpy, we concluded that these were no doubt the original roads that the boy/teen Jesus would have walked...just new pavement. We saw two boys in an angry fist-fight, until an older brother stepped in and pulled them apart. Each of these people have struggles, day-in-day-out lives about which I know nothing. There seemed to be no Jesus anywhere, and yet, this was his hometown. CC commented that Jesus likely knew these streets like the back of His hand. I thought many times of Nathaniel's comment, "Can anything good come out of Nazareth?" and wondered at the striking irony of this being the most run-down, needy place we had seen. Jesus truly identified with humanity in every way possible.

Finally, we found an outlet to the endless car shuffling. CC parked, and we got out to wander through the town. A massive Catholic church was there. It was built over the spot that is believed to have been where Gabriel spoke to Mary. A Byzantine church was there, then a church from the Crusades was built. This one was erected in 1969. 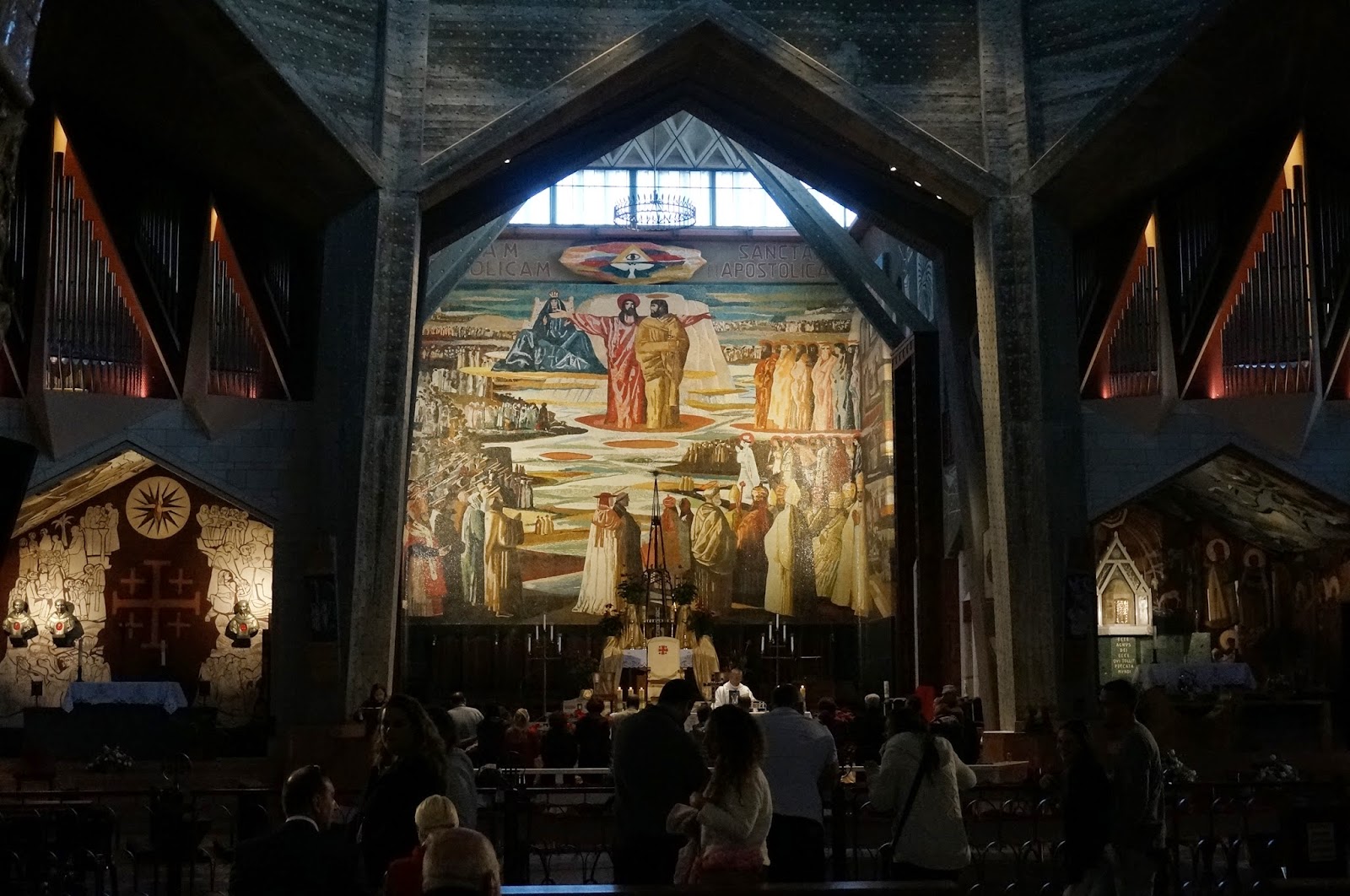 Inside contained beautiful stained glass. Each piece was donated from a different country, one from each Catholic nation in the world. I read after-the-fact that one piece donated contained diamonds. 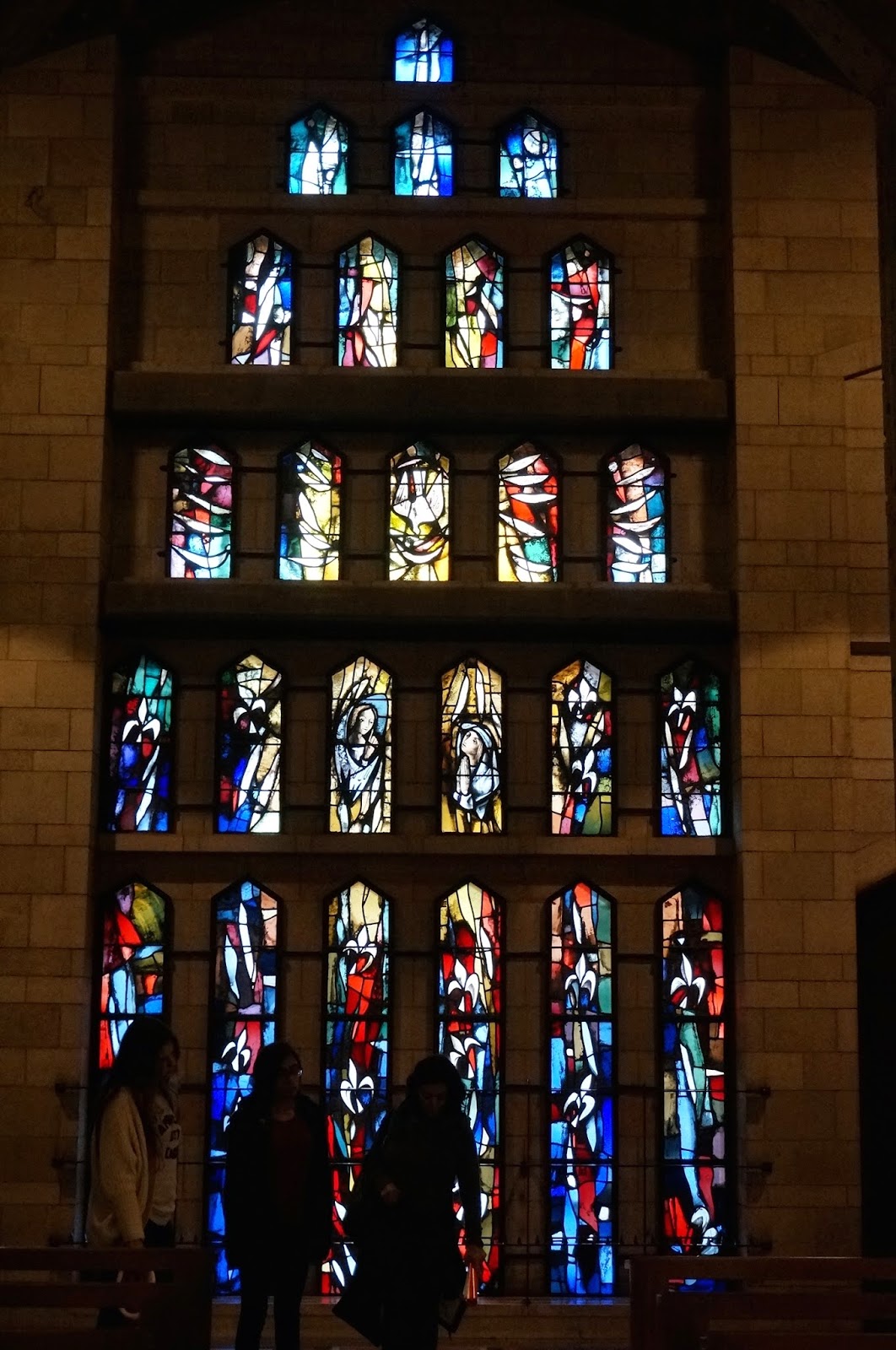 Just as we were heading out of town, I heard church bells. For the first time in many years, I heard bells along with the call to prayer. It was so beautiful, I stopped to listen until they were done. 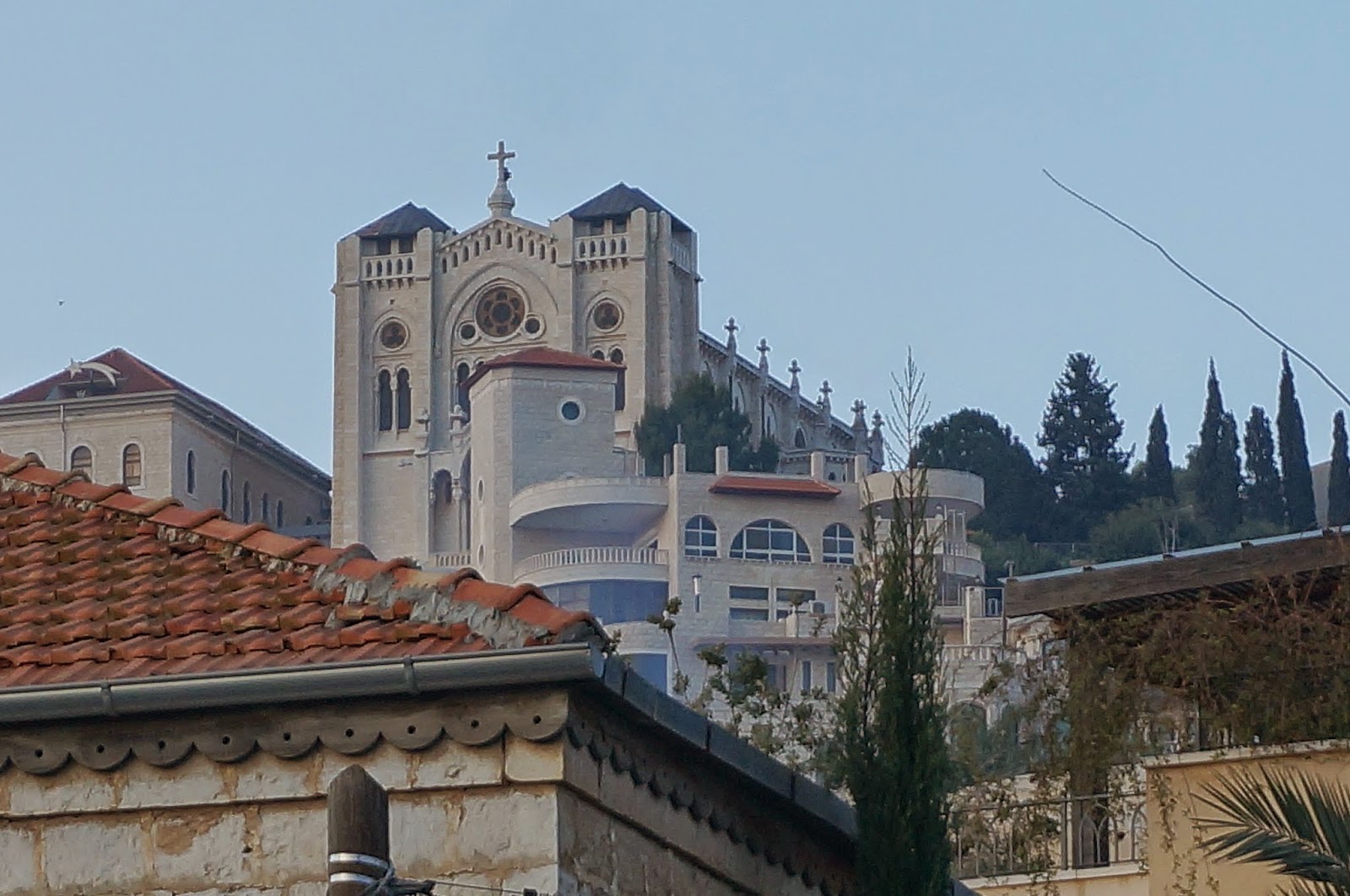 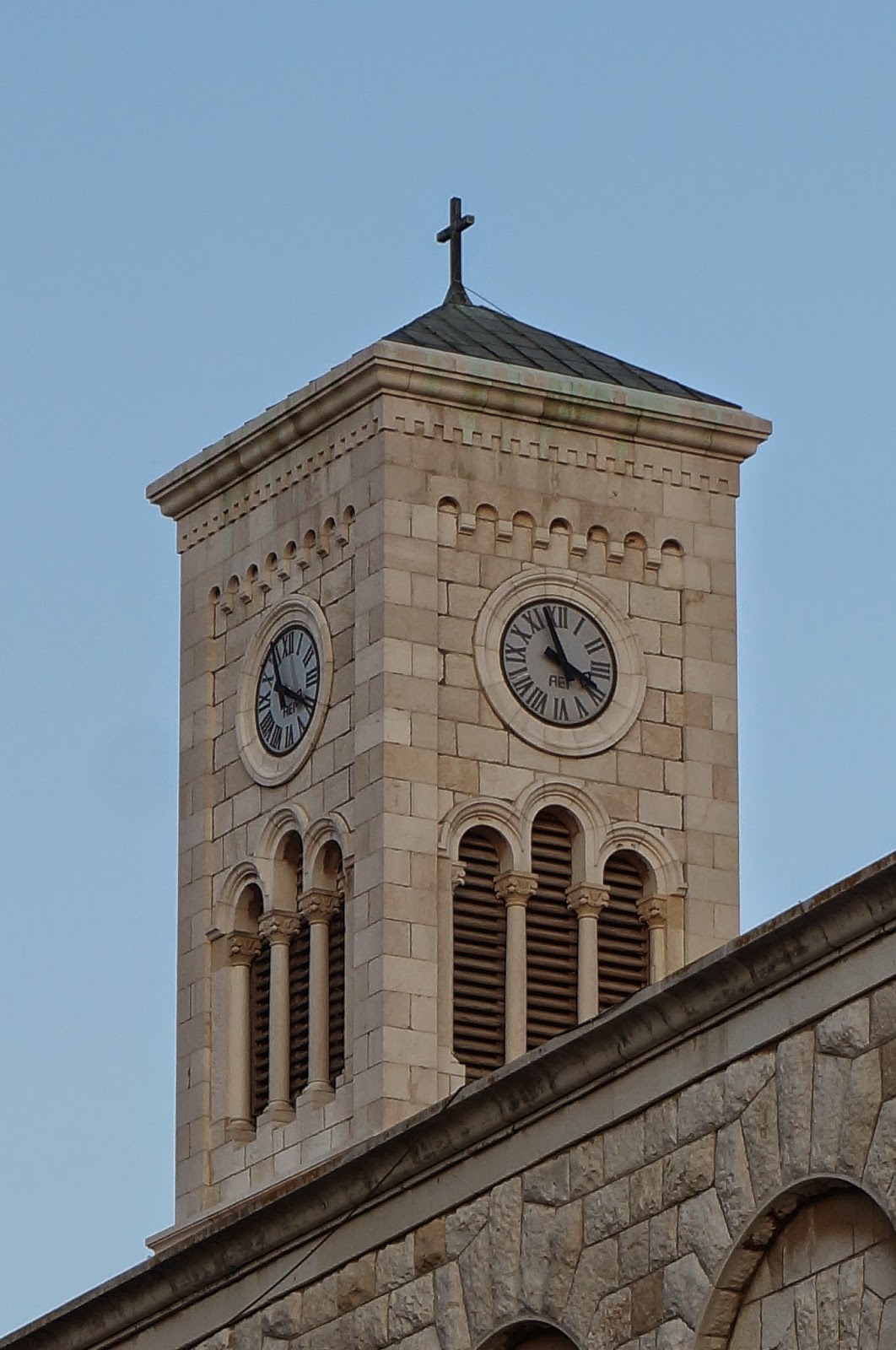 We found our way back out in the car, compass in hand, and made our way back to our cottage just as the sun was setting. It was a full day, we had seen a lot, and we had much to ponder. 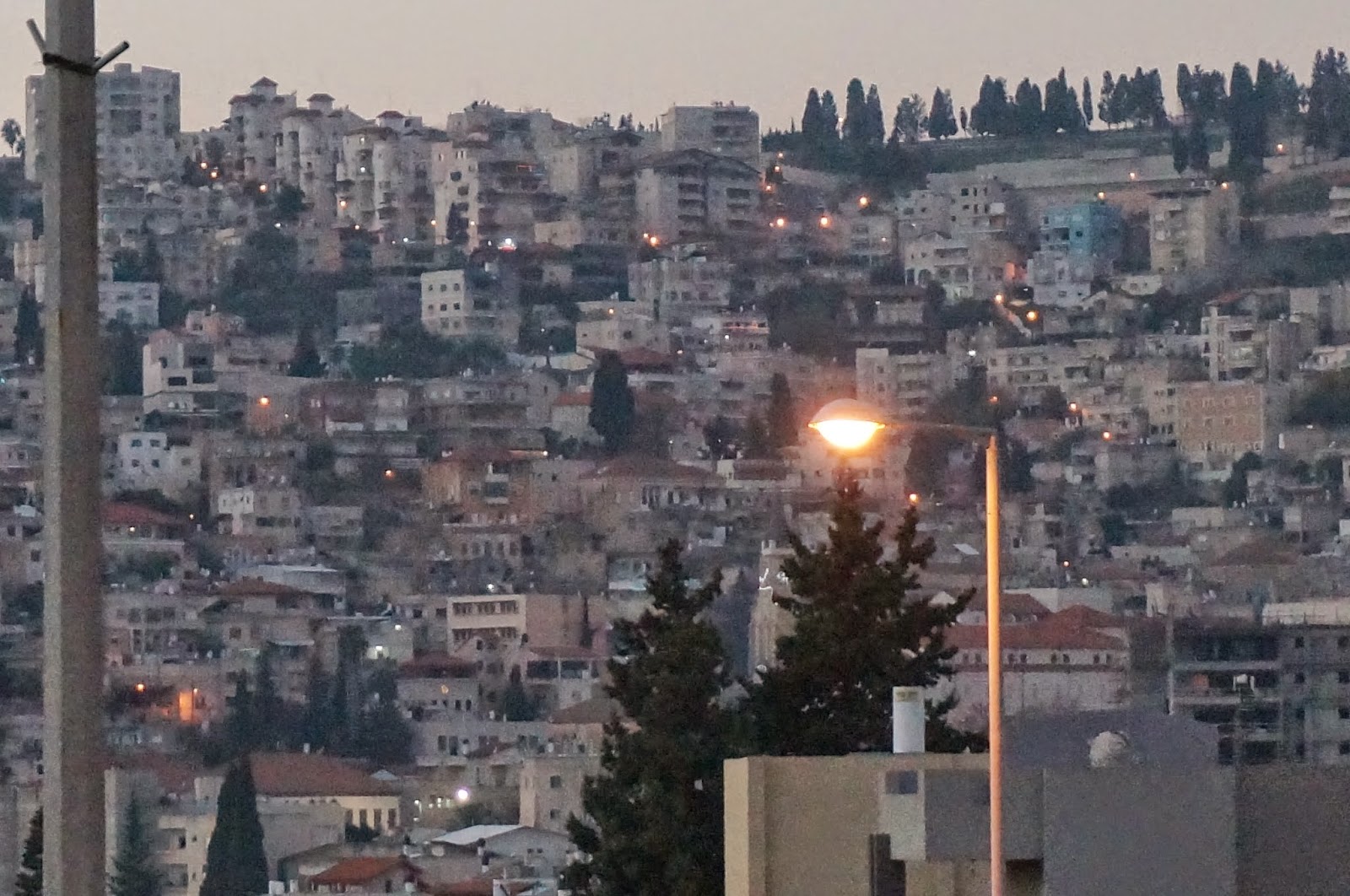 Posted by Sara Campbell at 1:10 PM

What always struck me about Nazareth was a godly young woman lived in the middle of a very ungodly city. It was there God found a girl He considered fit to give birth to His Son. Doesnt that just blow your mind?

Because my kids have been very sheltered on one hand, it amazed me that God plopped them down in the middle of a high school full of worldy filth . . . Why, Lord? Why cant they go to a C school? That was the first time I saw Mary, as a teenage girl in the middle of Nazareth . . . And Joseph, too!

We're not always in the cleanest of places, are we? It gave me encouragement that we can be in this world but not of this world.
:)

I'm an Israeli Jew and it often amuses me when tourists think that the streets in Nazareth or Jerusalem are streets that Jesus knew. What we see nowadays in Jerusalem or Nazareth are fairly new places built by the Ottomans, Arabs, the crusaders etc. Jesus knew streets and towns from the Roman empire time and what's left of them after the Arabs and so many other peoples/empires destroyed are ruins which you can see in very specific areas. So forget about the run down Arab streets in Nazareth. These were NOT the streets that Jesus knew or walked in, and the Arab residents of Nazareth nowadays (both Muslims and Christians)have nothing to do with the population that lived in Nazareth or Jerusalem in Jesus times.

Great point, Anonymous. You may have misunderstood me. Everything about Nazareth/Jerusalem was totally different than the time of Jesus, yes. I live in Turkey. I am certain that the ancient ruins here (like Perge) look far more like they did when Paul visited than Israel looked when Jesus was there. However, because the roads, especially in Nazareth, were so winding and unpredictable, it made me think that perhaps the very old was underneath all of that, following many of the same curves and twists. I know in Turkey, the road to "Konya" is actually a new road over the old road to the ancient Iconium. Anyway, I enjoyed your comment and published it. And more than that, I enjoyed your country. It is beautiful, and clearly blessed by God. And I felt welcome everywhere we went, so thank you for the hospitable welcome. I am curious, what's your take on Jesus, as an Israeli Jew.

Thank you for your kind words about Israel.
What's my take about Jesus? Well the thing is, I'm not a religious Jew. I was brought up in what you can call a secular home and environment. Over the years though I've come to feel and think that there probably is a "god", but I tend to think that this god is not necessarily tied to a specific religion. If there is a god, I feel that he/she/it probably wouldn't care so much if we humans follow a one specific religion and its commandments or another, but rather that we just try to be good and loving people.
Regarding Jesus, I don't know. we don't learn the New Testament in israeli schools. I know of course the general storyline. I think that Jesus probably existed. As for his teachings - again, I don't know much about them. It could be that like the people mentioned in the old testament, Jesus was indeed "a man of god" and that through him, like through the prophets of the old testament, god tried to connect with us humans and to convey messages, but again, when I think of the possibility of a god, I feel that what's important is what us humans have in our hearts and not whether we follow this or that religion. I may be wrong of cource :)

Hi Anon, glad you responded. I was curious if you'd come back. :) Thanks for the glimpse of your life. I grew up in a Christian home, but at a point in my life, I made my own decision about faith. I grew up learning so very much about your culture, history, Scripture, as we believe Jesus is the fulfilment of it all. So, naturally, seeing the Holy Land was truly a holy experience for me. If you ever find questions or nagging doubts in your mind, the book of Matthew in the New Testament would be a wonderful place to seek answers. It's written by a Jew, for Jews, about Jesus, so if you are ever wondering what it says...that's a suggestion. But thanks for taking time to engage me in conversation. You truly are blessed of God, though your people have suffered greater (I believe) than any people group on Earth, He most certainly has given you more than anyone else. Thanks, again.