Go go go, I'm Goin' in for the Hostages!

This past week, I was on a mission to get Big Ben some shoes that fit. He outgrew the ones his Grandma sent last year and was down to just the little pair of Sperry Dockers that I found at Goodwill last summer. Even those were getting hard to strap. If I couldn't find anything for his wide foot, CC was going to pick him up a pair at Walmart while in the US. So, off we went...shopping. We got in the store, and I found shoes in the range of 30TL. I just wasn't sold on them, though. Then as we left, I found a pair for 10TL (US$7). I asked the clerk, "Why are they so cheap?" He said, "They are all the same size." You got it, BB's size exactly! So we left that store with some really zooty black and yellow striped tennis shoes that my son is very proud of (as they look like race car tires).

On the way out, he spotted a toy gun. I've never bought a toy gun. I had 4 girls! But goodness, I guess the little guy needs a gun. (After all, didn't my friend Barb with the three sons tell me she was anti-guns with her boys, then they started chewing their bread sticks into guns and shooting each other at the dinner table, so she gave up on that?) And really, I am not anti-guns. Some of the guns really looked like handguns, though, so I hesitated. Then BB found this space gun. Oh, he started jumping up and down, clapping his hands. I think he was telling me he wanted it. I gave it to the guy behind the desk. He was so enthused that my son was enthused, he actually opened the package and popped off a part and started putting batteries in. It uses batteries? I had no idea.

The next thing I knew, it made some really amazing shoot-em-up sounds and then a guy (in English) yelled, "Go go go! I'm goin' in for the hostages!" It was a keeper. Big Ben smiled and shot everyone he saw. What else could I do but drive straight to the school? After all, we'd just bought our first gun. He proceeded to run (literally) into the office and shoot his Papa, his papa's business administrator, his papa's guidance counselor, and his papa's assistant administrator. He took 'em all out. At one point, he was chasing the guidance counselor (a Vietnam Vet, who I suspect had just as much fun as BB) through the hallways. Soon, our fun was over, and I announced we had to go home for nap. 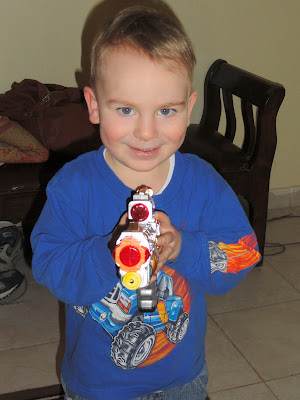 He slept with his gun. And I knew he'd finished his nap when I heard, once again, "I'm going in for the hostages!" He also waited ready to shoot his sisters when they got home. 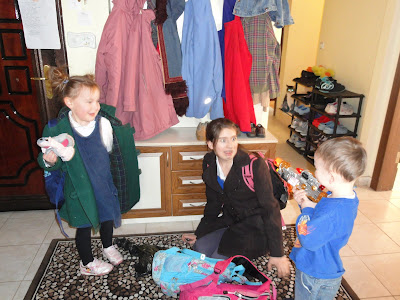 I love this photo. So many things that say "Our Life" to me. A spelling list hanging on the door to be called out just before school. Sweet Cheek's hair (yes, it is vertical). Firstborn's exaggerated expression. Phaselis the Great hiding in the background from the gun.

I think it was a good buy!

Posted by Sara Campbell at 7:34 PM

Hilarious- but where are the shoes?! Girl, we need to get together. I can give you old stride rite wides!!!

That is what I always thought as you remind me of those days!

I read this post yesterday and am still laughing about that gun today. Only where you live! Love it! And the matchy matchy - yes, they are adorable :)

Hi! I found your blog through Tara G's, anyways... I LOVE this post! I have 2 boys (age 2 & 3) and they turn e-v-e-r-y-t-h-i-n-g into guns! My youngest like to chew his sliced bread into an 'L' shape- to use it like a gun. They boys have a train set with a railroad crossing arm, the kind that goes over the road to stop traffic. Well, my youngest insists that it is his gun. Except neither boy refuses to call it a gun, they call them their "fire". They point and say, "fire, fire!" I haven't given in with buying any sort of gun yet, I'm not against it though.