Our high school is doing the play "Cheaper By The Dozen," set in the 1920's. This year the drama teacher opened two roles to elementary students, and my girls wanted to try out. We had all the "talks." You know the ones...there are MANY kids trying out, not everyone gets a part. It will be a good experience to try out, but please don't be too disappointed if you don't make the play. All those. But I was very proud of them for the initiative to sign up, practice, stand in front of peers and (horrors!) high school students, and try out. The best part was that the drama teacher encouraged them to rummage through their own clothes and come up with some type of 1920's interpretive costume. Oh, we had fun! Aren't they adorable? I really think we hit the 1940's mostly, but we were supposed to use only what we had at home. This picture makes me think of my grandparents and how proud they would be of my kids. 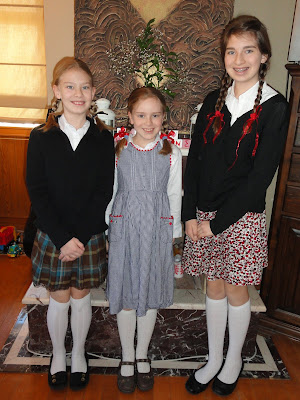 The Turks of course did not try out, but pranced right up the fireplace to have their photo made, too. What could I say? In spite of not auditioning, Big Ben got a role! (The teacher called and asked if he could be the littlest one of the dozen, just in one scene. I said, "Sure, you'll just need food, and he'll do anything you want.") Won't he look cute in knickers? 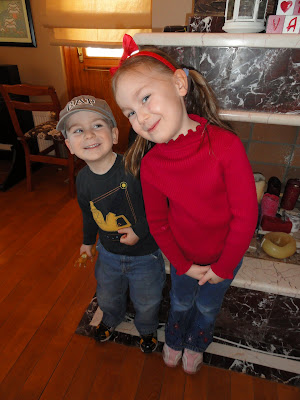 The morning of the cast list posting, I drove them to school and sat in the car with arms ready to hug...both those that got a part and those that didn't. They were given strict instructions to go check the list and come straight back to me, no matter what it said. At the audition, the drama teacher suggested Firstborn read for an older role, as she is clearing about 5'4" now. She got a role as a school girl in a soda shop. ("MOM! I have to FLIRT with boys in the scene, what am I going to do?!") And Twinkle Toes landed the role of the second-to-last of the dozen children. Miss Middler did not get a role, but received a big hug and a promise that I was very proud of her and this just meant lots of extra alone time at home for the two of us. She handled it beautifully.

And so, this week we start rehearsals!

Posted by Sara Campbell at 6:30 AM

Hooray and congratulations! I can't decide who has the best deal-the ones acting or the one who gets to have a lot of alone time! :)

And Eva and Ben, too! (I still love Eva's attitude toward things!)

Ben, I would bet is the natural ham bone. :)

I am proud of Miss Middler also. I know I don't need to, but would love to tell her the story of how Kathleen ran for class office three years before finally getting anything.

It does take guts to get in front of your peers (plus those older) and not win the prize but keep going back. I remember how very proud of Kathleen I was. First year she tried for secretary and lost, second year was for vice president and lost. Everybody made fun of her campaign that year with Mom pointing out it got noticed! (So what if you are being made fun of in the 8th grade, right?)

Lo, and behold just when I thought her political days were over, and I did nothing to suggest she run again, she ran for freshman class president on her own intiative -- after two years of humiliation. (It was all I could do to keep from telling her not to run . . . I did not want to see her cry again.)

She won that year!! I also might add she was an outstanding class president. She cared so much for all the kids and not just certain groups. Her eye was on them all, just like a mother hen. Kathleen is not cliquish. She gets along well both ends of the social spectrum.

I guess that was the year I really saw her gift for leadership and knew that some day she'd be out in front of people, that God meant her to be in the lead like that.

You tell Ms. Middler from me and Kathleen, that next year she can try for a bigger role!! :)

Oh, got to tell you that Cheaper by the Dozen is one of my favorite stories but one of the worse written books you will ever read. :) I still love it because of the content but if you've read it, you'll know what I mean.

Ernestine and I think Frank, wrote it.