My Favorite Thanksgiving Picture and Memory 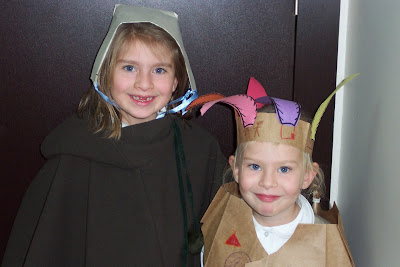 Here's my all-time favorite Thanksgiving picture! This was when Firstborn was in first grade and Twinkle Toes right behind her in Kindergarten. Goodness they grow fast!

My favorite adult Thanksgiving memory is from 1998. We had just arrived in Singapore the summer before. Getting married and taking off 1/2 way around the world six months later was a lot of transition. CC and I were both teaching in Singapore and had met a precious Chinese/Indonesian ethnically-but American now, family. I taught their daughter Joanne in third grade and became very close to their family. They contacted us and asked to treat us to Thanksgiving dinner at the American Club. This was a fancy club only for the very wealthy or Embassy folks. Here I was, in Asia of all places, dining with Asian friends, and eating some of the best American traditional Thanksgiving foods I had ever had. Only God could pull that off. And the really neat thing is that the mom, Esther Liu, was like an Asian version of my mom. She was so similar to mom that I really felt God had put her in my life just to show me He was there during that first year away.