Keeper of the Green

Our Firstborn is named Mary Erin. As she grew, she asked what her name meant. Mary means, "bitter" referring to the bitter waters at Marah. Erin means, "Ireland." She curiously asked, "So, I'm a bitter girl from Ireland?" No, she was not named for meaning, but for people. Her paternal great-grandmothers were both godly women, Mary Lois and Erin Kathleen. We absolutely loved the combination of the name and so we gave it to our daughter. It didn't occur to us at the time how closely she would be tied to Saint Patrick's Day. She was due in April, after all. But she was born exactly one week before St. Pat's Day. One of her very first gifts was a little Irish bear with a shamrock, which we named Erin Bear. Because of her name, because of her birthday, because she is just a fun girl...she has become the "Keeper of the Green" for St. Pat's Day. She woke at 6:30am and checked/suggested/overruled every one's wardrobe to be sure they had enough green on. I admit I got one pinch from my husband, but just because I was still in pj's and hadn't put my green on. Best of all for Mary Erin, St. Pat's Day officially starts the countdown to her birthday! 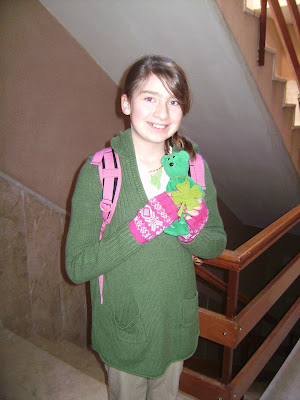 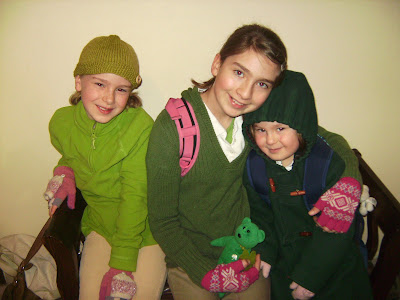 The Adventures of a Drama LLama said...