My second oldest daughter has had long hair since she finally got some hair around age 2 1/2. Just recently she decided it was time to have a short hairstyle for awhile. But since it was already so long, she decided to grow it until it hit the 10 inch mark, then send her ponytail in to Locks of Love, an organization that takes donated hair and makes wigs for children who have no hair due to medical reasons. 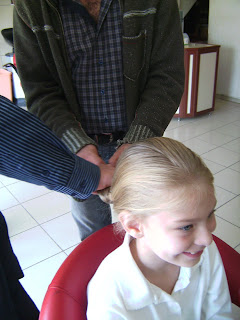 The gentleman who cut her hair was the very same guy who gave her the first haircut she ever had, at age 3. He felt very unsure about cutting off all her long hair. He kept asking us if we were sure. I had my Turkish friend explain in detail to him how it had to be done (in a ponytail holder and at least 10 inches long) and that she was sure. 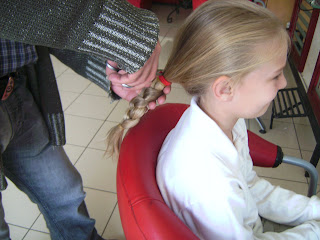 I'll admit, I was all for this. I want my children to think of others, to give of themselves. But the gravity of it caught me by surprise. It actually broke my heart to watch her braid being cut off, even though I had supported her decision all along. But then just as quickly as that emotion came, I thought of the health of my kids, and how thankful I am for that. And how hard it would be if they were facing embarrassing things like hair loss. When I told her afterward the thoughts that ran through my head, she said, "Mama! I thought the exact same thing. It is sort of hard to see my hair being cut off, but just think how I'd feel if I had no hair. I want someone else to have my exact hair in the world!" 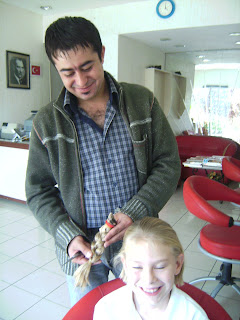 So, she did it! And we think she looks adorable. Tomorrow's Topic: Perma-Baby gets a bob and why.

Posted by Sara Campbell at 2:21 PM

Abigail and I cut off ponytails a couple years ago. I *still* haven't sent them in though. I need to do that... Abigail's hair is already long again, but not all the way down her back like it was. And she has so much hair, her ponytail was twice as thick as mine.

I love the girls new haircuts! I went with my mom and had my hair cut into a bob when I was about 6 years old. When my dad came home from work that evening he didn't recognize me and asked my mom who my little friend was!!! We still laugh about it to this day :-)