So, we've lived here now for 6 years. We ought to be fluent. I have a handy list of excuses, the top one on the list being that we basically live and work in an English world, with school families who desire their children to know English. We do know a little Turkish, just enough to be dangerous, literally. Time and again I find myself agreeing to something my neighbors suggest I do, not understanding a word they've said. I've bought raffle tickets from neighbor kids, having no idea why I just gave them money and why I now hold a ticket I can't read. I've agreed to take a lesson in Turkish cooking, with no idea where or when it will be. Thankfully, some friends who know more Turkish than me have saved me from agreeing to get a bikini wax treatment compliments of my neighbor.

My kids know a little. They can order in Turkish. They can use basic greetings and say pleasantries. Walking home from school the other day, the 4 girls were stopped by a Turkish lady. She wanted to squeeze Eva's cheeks (a common pasttime here). She then asked the girls, in Turkish, "Where is your mother?" Firstborn tentatively replied, in Turkish, "My mother is at home." (Good! 1 point for the pronoun, another for the correct preposition usage!). Then Perma-Baby piped up, and the sisters braced themselves. This daughter o' mine, who was born in this country and who used to answer me in Turkish as a baby, replied, (in English), "We don't peak Panish." (That would be "speak Spanish" in case you are wondering). Thanks to Dora the Explorer, all the jibberish around us (Turkish) must be Spanish (the general term for a foreign language), and we, as a family, she asserts, don't speak any of it. 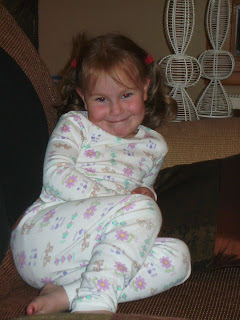 The sisters fell over laughing. The lady pinched her cheeks, clueless, and told her in Turkish how sweet she was. Whatever. I've tried. 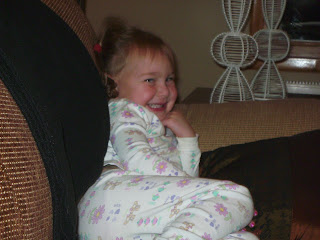 Posted by Sara Campbell at 1:47 PM

How can anybody resist Eva and her Panish? I wouldn't be able to resist any of them.

Your little Eva Kathleen and my not-so-little Kathleen Abbott . . .and all of our kids, never stop being the love of our life. (We can include their Papa and Dad in there, too! - ha)

I laughed and laughed about the bikini wax . . . You are too nice Sara. :)