Can you tell I am teaching English? (onomatopoeia) Big Ben's birthday was officially last Saturday, however we took cake to the school to share on Friday morning. He got to celebrate that afternoon by missing 1/2 of his nap so he could sit in the government office entitled "Security Police" in order to keep all our visa paperwork in order. He was so tired by dinnertime, we shoved his pizza in him and the sisters ate his cake while I put him to bed! Saturday after his nap, he was a happy boy once again, so we sang and opened presents.
Without my knowledge, the older 3 girls prepared gifts for him. Essie gave him one of her favorite monsters (she always goes for the monsters/cars/scary creatures and has told him she'll keep him in stock with all that stuff when he gets bigger). Annika gave him a dinosaur she had recently gotten from her McDonald's meal. Mary Erin gave him an action man figure she found discarded at the park (most certainly, by accident, as he was one cool guy). We washed action man up and he is ready to fight the bad guys. 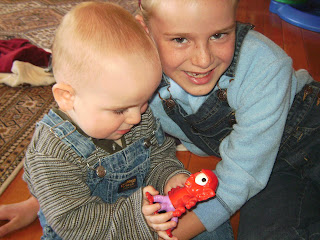 We gave Big Ben a Fisher Price airplane. He loved it! 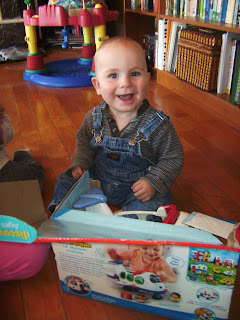 And of course, we had to arrange them all in the new airplane. The monster is the passenger, the action man is perhaps a hijacker (it's part of our reality, sorry), and the dinosaur has climbed upon the tail wing. 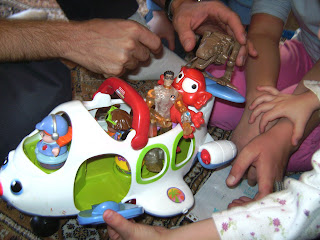 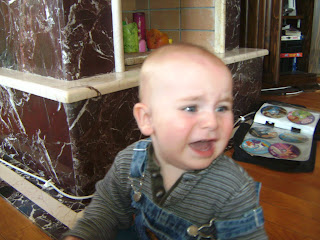 Posted by Sara Campbell at 2:05 PM

I love the pictures and I'm laughing.

I love the pictures and I'm laughing.

Sara, that is so enjoyable to read about the girls, the presents they presented, and Benaiah's birthday plane. What a sad face when his sister took the plane. Your children are precious beyond words.
Vickey Smith