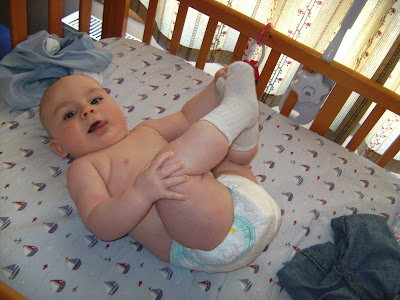 Ok, well I would say most of my posts are upbeat. Life Overseas. Interesting Cultural Tidbits. The Irony of Having a Boy After 4 Girls. That kind of thing. Today I am posting about a Scary Lady. On Monday night, Benaiah went over to my neighbor's (Ayla's) house to "play." ("Play" consists of being in a room much warmer than his house and having a lot of people kiss on him, speak Turkish to him, and feed him Turkish soup.) When she returned him, our trash lady (who does our trash pick-up each night and keeps the common areas of the apartment clean) happened to be coming up the stairs. She saw Benaiah and basically went berserk over him. Most Turks go berserk over him, but not to this extent. She suddenly had a very scary, intense face and she was forcefully grabbing him from Ayla. Ayla realized something was not quite right and passed Benaiah to me. Then the trash lady came after us....forcefully embracing him and kissing him square on the mouth. Ok, that's when I had the little red flags go up and started to back up into my house. Ayla then pulled her off of us. She turned to Ayla and started fussing at her for pulling her away. Ayla told her not to kiss and pinch him so much. At that point, I smiled, made Benaiah's arm wave "bye bye" and closed the door.

The funny part is when I came to tell the story and re-enact it for Ross. He watched, then turned back to the computer. Then I said, "Seriously Ross! This is what she did...." then showed him her scary face again. He said, "Ok, ok, I just don't want to see it again. It's scary." He's 41, but things can still be scary.

So Tuesday I was up at the school and asked by best Turkish friend about the whole scenario. She explained it might be one of two things. She said some Turks love babies so much, they just have to squeeze/pinch/hug/kiss/bite them hard to 'get it out of their system." Like I love you so much, I have to eat you, kind of thing. Ok. So maybe she wanted to eat him. The other possibility is that there is a belief here than an Evil Eye will curse you if you are not careful. People are constantly trying to pin a bead to ward off evil on my kids. We, of course, tell them we are Christians and don't believe in that. We say that our God protects them. But some believe it so strongly, they will not compliment a new baby for fear it will draw the Evil Eye to the baby. So when they see a newborn, in a sweet adoring voice, they say, "He's so ugly." She said some people believe they have to squeeze/pinch/hug/kiss/bite the baby hard enough to make them cry. Then the Evil Eye will not curse them. I squeeze him a lot, and kiss him, but it is because I can't get enough of his fat stores. And he is my last baby. And you know how that is.
Anyway, just a day in the life, but I thought you'd be interested in reading that. I didn't take a picture of it. I didn't want to scare you.
Posted by Sara Campbell at 12:38 AM

Yikes! I'd be scared, too! Of course, your husband's reaction is priceless, too.

I love hearing stories of what your family is experiencing. Thanks for letting us live vicariously through you.

Ross sounds EXACTLY like David. David would react that same way to me (and does) because it scares him too much and since it is over, he does not need to think about it. I, of course, keep pressing the point, wanting him to "get excited" with me. He is trying his best not to get excited or else he would hunt down the perpetrator and beat him to a pulp for threatening his family.

:))) That's David anyway. I don't know Ross' reasons. It took many years for me to understand my husband and there are times he is still a mystery. I guess that is a good thing. He says he feels the same way about me. I still fascinate him. Neat, huh?

Not sure how I got into that story but back to our precious boy . . .

I would have been scared to death myself! Isn't it neat how we mothers go into protect mode when anything threatens our offspring? I don't think there is anything we wouldn't do to keep them safe.