I really am eventually going to run out of posts about Cappadocia, I promise. It is just an interesting place! Ross took the big girls on a hike the first day. They were given hiking names like "Trailblazer" and "Scout" and if anyone started to get whiny, they were dubbed "Sharpay" (from High School Musical). But really they are super travelers and super hikers. Wouldn't you love to come out to a front yard like this? Rocks upon which to climb, ancient trees from which to hang your clothes line, and a big hole in which to enter your home? Can't you see why George Lucas wanted to film Star Wars here? 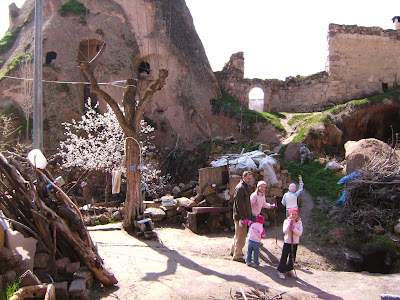 The hikes there include scenery like this. Who used to live here long ago? Where did she fetch her water? Did her children used to climb those walls? 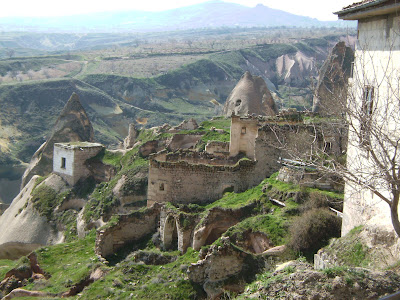 The hikes weren't grueling. We did take time to smell (and pick) the flowers. 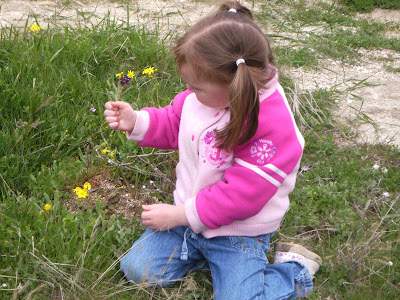 When they came back that first day, they casually told me they had stopped at 'tea garden.' Hmmm, really? That's nice. What did I envision? I envisioned an outdoor terraced restaurant with tables, chairs, waiters, and hot tea. When Ross took all of us on a hike the next day, he asked if we wanted to stop at the tea garden they found. I said, "Oh, ok. Sure, a cup of tea would be nice." My mouth nearly fell to the floor when we came here... 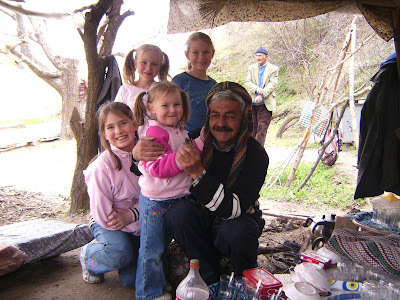 This little old Turkish man evidently hikes out to the wilderness each day with his tea bags, sugar, cups, and cookies. When hikers need a break, he builds a fire, makes them tea, and chats with them. Then they pay him a little for the tea and go on their way. This man was fascinating. He used to be a tour guide and is now retired and opened his own tea garden. In the middle of nowhere!!! I was impressed with his entrepreneurial spirit. He told us he spoke five languages, and I heard him speak some of them to hikers. He asked me what we spoke, and I told him only English and a little Spanish and Turkish. He then spoke to me in Spanish, only that wasn't even one of the five! We sat on cushions under a lean-to (with a tarp over us in case of rain). We used sawed off 6 inch high log discs as our tea tables. He insisted the kids eat as many cookies as humanly possible, and of course, they were willing participants. 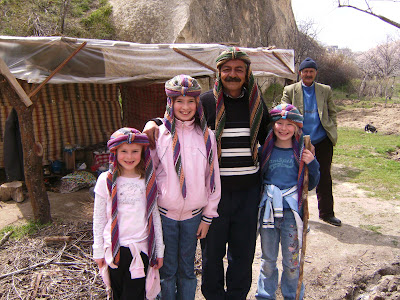 Before we left, the girls tried on the turbans he had made. As we finished the hike, all I could say was, "THAT was the tea garden?"
Posted by Sara Campbell at 1:39 PM

Your children will have such stories to tell when they are older. What rich experiences! It's wonderful that you are so good about taking pictures and keeping a record of these things that they would not see if they were growing up here.

Blessings to you my friend!

WOW . . . Speaking for myself, I don't care if you don't run out of stories about Cappadocia. :)

These are great! What fun!

I read this after an awful morning of sickness, dragging myself out of bed, getting dressed and trying to look presentable . . . Then on to voice lessons, which are not normal voice lessons.

No experience I have ever had is like Karoline's lessons. For one hour I sit and absorb my daughter and her teacher singing the most gorgeous musical pieces you have ever heard. Tears come to my eyes listening to the gift God gave my daughter. I know I sound like I am exaggerating this, but I am not.

Then it catches my attention at how God leads Karoline's teacher in all that she teaches Karoline. Only God could give her the insight into Karoline she has.

THEN, I came home, sat down here and read a wonderful short story (along with pictures) of Captivating Cappadocia.

Ahhh . . . Such a nice ending to what started as a terrible day. Thank you Lord!

I want to have tea in THAT tea garden. It just went on my list. I'm so glad you're preserving these incredible memories. They're a blessing to those of us who read them and I know they'll be a treasure for your family in the years to come.

I'm glad you stopped by my blog today. And I'm glad you laughed. Sure you can link. I just wish we could al be in one big room laughing together like in the OBU days! Love you, Friend!