It's time for some confession. When I was in the singles' group, we had a game night. I played a game where you had to tell the truth about something after others had tried to guess the correct answer relative to you. My question? "How many unknown objects are currently in your fridge?" After everyone guessed, I said, "Um. None. That would be gross." I remember Shelley McKee saying, "SARA FISH!! You are lying! Don't you have at least one spoiled thing in your fridge?" I said, "No, I really don't." Well, fast forward about 15 years. Life has changed. I prepare 6 dinners a week for 7 people (yes, Benaiah counts). That's 42 servings weekly if you are thinking in terms of a cafeteria (and Ross eats double). There are unknown objects in my fridge. Last week I found this one. 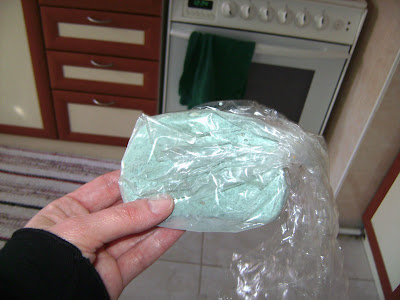 No, it is not blue play-doh, nor is it a base for a dried flower arrangement. It is a lonely piece of white sandwich bread which lost all of its friends somehow, got shoved behind a jar of something, and just gave up all hope on being noticed. So, Shelley, I must change my answer to...oh, about 4 probably.

Posted by Sara Campbell at 2:30 PM

Wow, Sara. That's a lovely shade of blue. Excuse me while I gag now. Yeah, there are a few "Well, I never" things from my singlehood that I've taken back in spades. Life has a way of humbling you that way.

i think will might actually enjoy trying oil wrestling. i'll make sure NOT to mention it to him!

I have ALWAYS known!

That is funny . . . I agree with Snoodlings.

As we get older, we definitely eat our words . . . but obviously not all our food. :)

Tell me about the number of meals!! And, I have got one less than you do. Watch as they get older. Your grocery bill will surpass the house payment.

I'm laughing out loud for sure!!! But what a pretty shade of blue it is!!