Tomorrow we are driving about 3 hours away to see this... 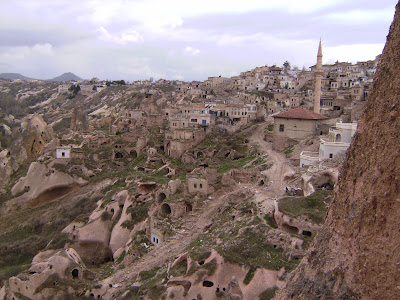 Cappedocia, where the rock is so soft you can carve homes into it. 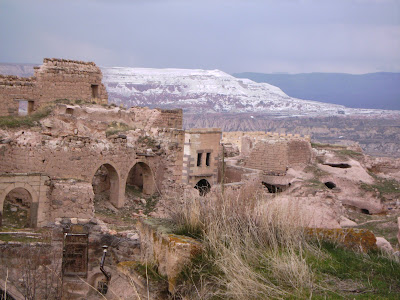 I can never go there without thinking of the Christians who once hid from Nero there. 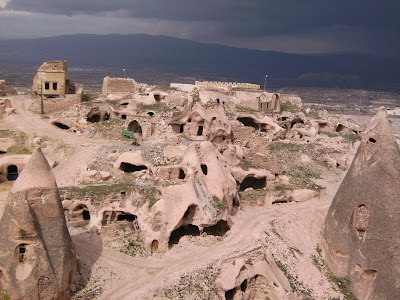 We are staying (all 7 of us!) for a few days in a room carved into the rock. Nice homey Turkish breakfasts made by the owner's wife. Lots of hiking in a rustic terrain. A few board games and math flashcards. Should be a good Spring Break! I'll bring you details and pictures when we return. But for now, I must tell you about Sunday. 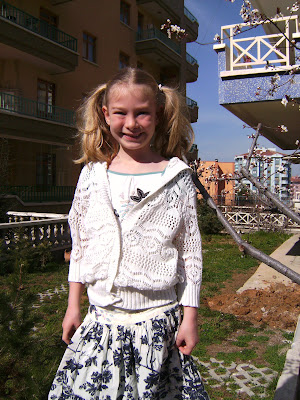 We had such a nice day. It was warmer and sunny. The girls got to (finally) wear some Spring dresses. 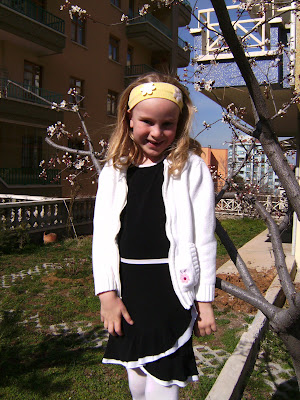 As we loaded into the car, I wanted to get a picture of each of them (lots of grandparents reading this, thus the overload of grand kid photos). Eva clearly accessorized herself that morning. (She is not a risk-taker, so her bent-over, old lady pose was based on her theory that she was about to fall). 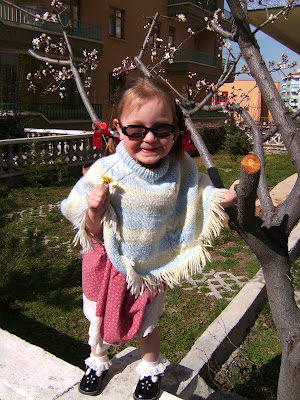 Still leaning, but that's better. Told Ross that morning, there's nothing cuter than a girl with braids and bows. 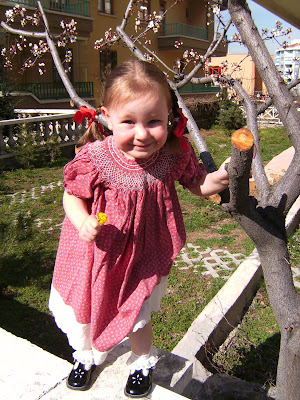 So after a wonderful Palm Sunday worship and lunch together, I asked Ross to drop the big girls and me off at the pazaar. What do you need? he asked. "Oh, just stuff." I told the girls they could choose 1 thing each. Amazing what you can find for 1 lira (6o cents). Mary Erin chose some hair clips. Annika chose a little glass doll with a big magnet on her back. Esther chose a fuzzy bird that, when squeezed, makes an awful noise. 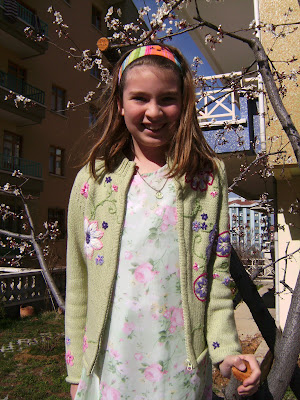 Just as we were leaving, I happened to notice a small table of hats. I am a hat girl. Ross' first memory of me was of a young girl who wore hats to church. As I stopped to look at the little hats, I realized it was one of those interesting times when I sense God is speaking to me through a circumstance. They were Easter hats. This isn't a country that celebrates, or even realizes, that it is Easter. And yet, the week before Easter I find Easter hats at my pazaar. Sometimes I just sense He reminds me He is here. I asked the man how much they were, with a friendly smile and the announcement that I had not only these three daughters, but one more at home, for which to buy. He said he'd sell them to me, 4 for 10 lira. Deal. Now we have not only some matching skirts to wear on Easter Sunday, each of my girls will have a hat. And I just happened to be wearing this when I bought them. 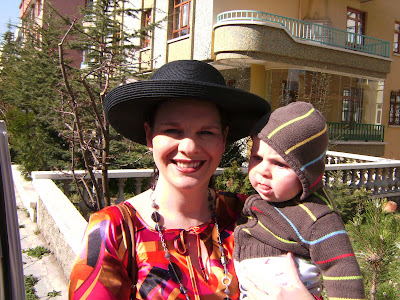 Awesome Sara! You are so much like me! It amazes me how much we are alike! Ask my girls what a hat person I am! Love, love, love them. Still wear them whenever and buy them for my girls!! I used to wear them a lot in the 80's.

I loved your story and am right there with you about God letting us know He is with us! He's been doing the same for me. In fact, I just finished thanking Him for His wonderful blessings today!!

I LOVED this post!! You make Turkey seem so wonderful. I know it is probably not as great living away from home as you make it sound, but you sure make it fascinating. The girls are SO much like my girls! Doesn't Eva have the personality? The other three are angels!

Thanks for sharing. I know these blogs are mainly for family but God really blesses me through them at different times!

Love all of you! Have a great getaway!

Oh, and Easter is just not Easter without the hats! Do you wear gloves? I used to put gloves on my girls also!

It was a sensational Sunday, wasn't it? :)