Well, the obvious thing about which to blog is illness. Currently 6/7 of our family have some degree of an upper respiratory tract infection. But I am sure as much as I don't want to blog about URTI's, neither do you want to read about them. So, I decided to blog about something funny this daughter said... 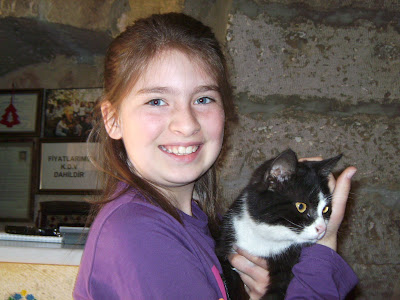 It began when Annika informed us all she was 'going to be invited' to an ice skating party in May. (2nd graders pretty much invite and un-invite friends to birthday parties all year long prior to the party, according to how well they are currently playing together, I have learned.) Then Mary Erin shared that Betsy Ross saved her money, bought herself ice skates in July, then was taught how to ice skate by John Ross that next winter. Hmmm, we all said, that's interesting. Then she said, "Sisters, his name is ROSS. That's how she got her name, Betsy ROSS. She married him later." Oh. Then she said, "Yea, she had like 4 husbands." Esther blurted, "Well, that's very bad." Then Mary Erin replied, (I love this.) "No, Esther. She didn't have them all at once. She kept getting new ones because she OUTGREW them." I smirked. She realized it wasn't exactly what she was trying to say. So, I began to wonder...how might one outgrow a husband?
Spiritually? That'll never happen with the Ross in this house.
Height-wise? No, 5'6" since grade 8.
Mentally? Not likely since I seem to be losing rather than gaining brain cells these days.
Physically? Well, now there is something to consider. I exercise every night while Ross eats a tub of ice cream. I guess if we keep with that nightly tradition we won't outgrow each other.
Posted by Sara Campbell at 8:59 PM

Which, for many of us wives, is a funny story in itself. But we won't spoil that part for Mary since someday, the Lord willing, God will give her her husband to grow with and she will discover the comedy that marriage often is.

P. S. I am sorry all of you are sick and hope you are better soon.

Two days until our little red-head completes 17 years of education, is home for 54 days and then starts the next three years of study. What a journey! Needless to say, I am taking a load of Kleenex. This is shaping up to be quite emotional. Her roommate will be with us the whole time, which is more tears.

Anyway, you get the gist of what is going on here. :)