Awards Day is super fun! The kids are out of dress code. The teachers are all smiles because the end is in sight. There's lots of happiness for those getting awards. I snapped some shots of my kiddos that day, though I never really know ahead of time and just have to have the camera ready.

Miss Middler made me so proud. She scored high enough for honor roll, but additionally she received both the Middle School art award, the Middle School Student-of-the-Year, and the Aslan Award. Um, talent. Amazing. And she's so stinkin' sweet. We'll never hear another word about what she won. She'll just stuff it in a drawer. 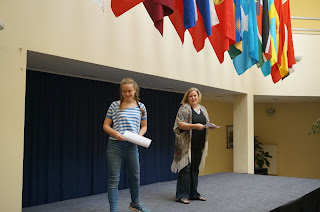 Twinkle received the Honor Roll and the Aslan Award. The Aslan Award involves teacher recommendations and community service. In her mind, community service is no sacrifice. She got her hours in last summer serving at an inner-city (USA) hispanic church ministry. I'm not sure what God will call her to do, but I have no doubt she'll be serving, and she'll be with children. She's a kid magnet. 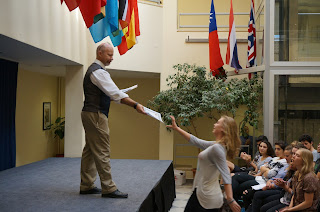 Firstborn makes me proud. She's gone from a shy little girl who used to be subjected (by me) to friendliness lessons (meaning we would go to my friend's houses and practice greeting them when they answered the door!) to an outgoing, fun, godly leader. She earned the Aslan Award, the Honor Roll, and the Yearbook Award. The man handing it to her, her Papa, was yearbook editor for our high school. Four years later I was the editor for the same yearbook. Somehow I wasn't even crushing on him back then in 8th grade, though I am now. But anyway, chip off the ol' block, Firstborn was Editor-in-Chief this year. Now how she managed to take Pre-Calculus still has these word-loving, math-despising parents scratching their heads! 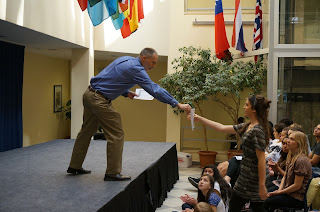 My sweet little guy got the A-B Honor Roll last year, but as a first grader, realized there was an even better one. He said at the end of last year, "How can I get that yellow one?" I explained what it meant to make all A's and was very casual about it. But he wasn't. He worked hard all year to earn the award. One night he came home in tears because he had made a low grade on a paper, and I explained what it meant to "average" grades. By the end of 4th quarter, his efforts had paid off. But the award wasn't yellow this year! And goodness, he needs a haircut in this picture. (Spoken from the mom who just gave him a summer buzz.) 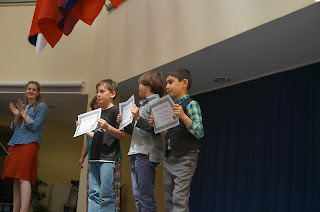 Sweet Cheeks worked hard and made the honor roll and was nominated for the Upper Elementary Outstanding Character Award, which of course means more to me than grades any day. She also got a class award "Most Likely To Be a Baker." Love it! Her plan is to open one day "Sweet Cheeks' Sweet Shop" (and she says you get free stuff on your birthday.) Well done, CampbellClanKids! 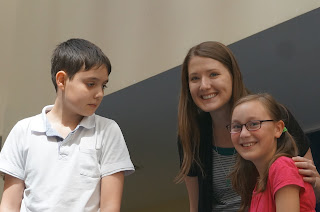 Posted by Sara Campbell at 6:54 AM

Ok, next year High Honors is yellow. I didn't realize it mattered. :)