We did find the ancient city of Silyon, famous for being one of the few cities in the region that Alexander the Great could not conquer. Oh, after our three hour hike, we could see why. The sheer cliff dropoffs (of course, with arrows being shot at them while trying to climb them) would explain why it might have been hard for poor Alex.


Here we are at the start of our hike...excited and ready to go! (Big Ben's shirt says, "Major Trouble.") 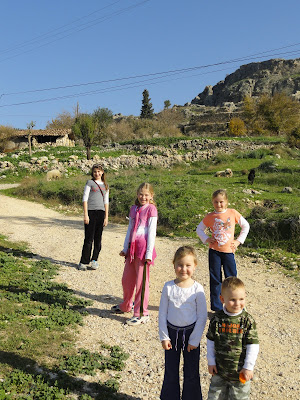 There was a narrow path, which proved to be difficult to find and follow at times. 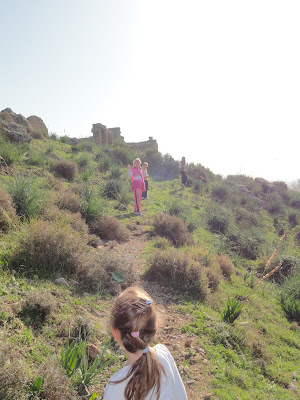 In the background of my Cutie Patootie, you can see some of the greenhouses, then an ancient wall, then the lush new growth...all together. 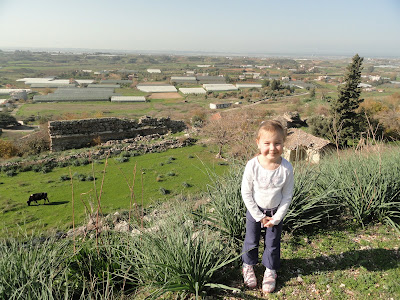 Soon we began to see some of the structures. Big Ben rode on his papa's shoulders. I held Sweet Cheeks' hand. The others fended for themselves and were great hikers as always. 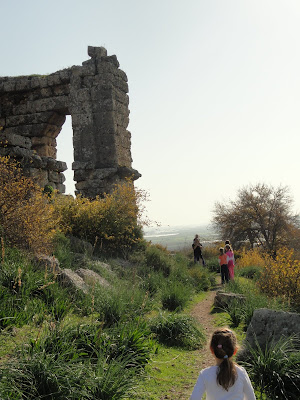 I was utterly amazed by this house. Someone, sometime, gathered all these 2000 year old stones, originally from castles and fortress walls, and assembled them into a home. No one lived there. I sort of wanted to live there. I'm weird like that. 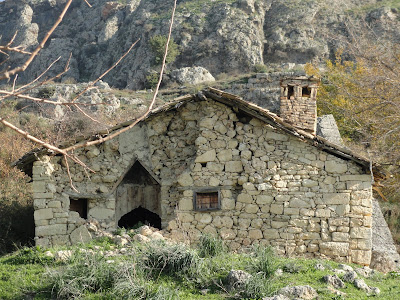 Posted by Sara Campbell at 8:35 PM

:) Sara, the best part of this is the commercial at the end for the upcoming attractions . . .

Not exactly the best part, but what I get a chuckle out of.

Gee, somedays we need a chuckle and today was one of those.

I am marveling at the LONG hike all of you took. I bet this was something to see. I love 'old' and imagining how people once lived . . Unlike you however, I would have had no desire to live in the cobblestone house, 2000 years old or not. :)

That reminds me of when Kathleen was in France. One thing that fascinated her was, to put it in her words, "Everything I walk past is at least 1000 years old."

Now I know why my history teachers always called America a young country. I guess we are.