No, this statue that adds about 20 lbs to my figure was not in the torture chamber, but it should be! 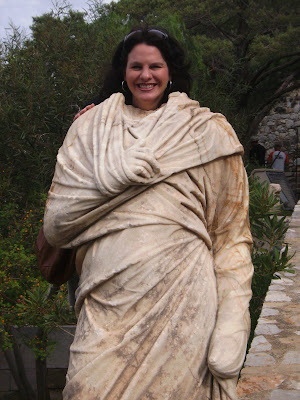 As we walked through the various wings of the castle, we came upon a sign that read, "Torture Chamber. May be difficult for children or those with a weak heart." That served a challenge to me. I convinced my friend Brenda that we would survive it, and down we went. This picture was taken from the dungeon up. Those are the actual steps the criminals descended. There was a sign above the door in the original language, which translated, "Where God Does Not Exist." It was very warm inside, so far down into the earth. It was dark. 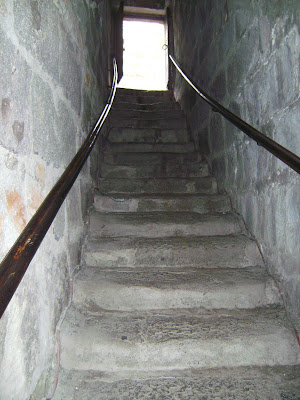 There were some actual objects used for torture in the 1500's. With my tendency toward a bit of claustrophobia, this would have been a bit too tight for me. 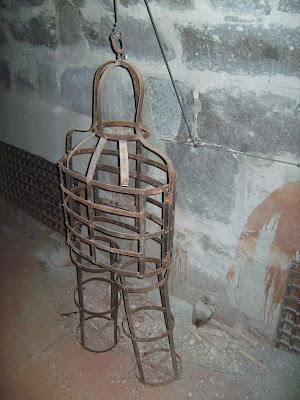 Then there were the cells. The size of each would have required the offender to curl up all the time. This was a cell down into the ground. They had put some fake hands in the grate for effect. Sure made me decide to watch my p's and q's. 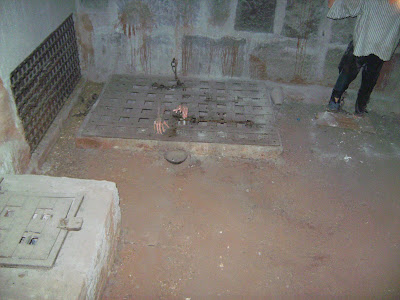 Perhaps the most remarkable part was that the Spaniards who toured it just prior to us, decided to close and pretend to lock the door to the dungeon on us. They thought their joke was a good one. But the real joke came when we left the dungeon only to see a police officer locking the gate to that wing. He motioned us to quickly exit. It seems it was time for Friday prayers, and no one bothered to tell anyone else that we might actually get locked in an exhibit during that time. That would have been a good blog post, though. Locked in a 600 year old torture dungeon for the afternoon. I realize this is a morbid post, but I promised my nephew who is currently studying castles, that I would get him all the details, gory and all.

Posted by Sara Campbell at 2:45 PM