Today I had the privilege of being a 'driver' and 'helper' for Firstborn's field trip. Since our sweet Heybet is back in town, at least for awhile, she came and stayed with the little ones and my eldest got me all to herself. Her class has been studying Turkish culture and history as their Social Studies subject. She has learned so much. You really don't want to get her started on the Hittites unless you have a few hours to spare.

Today we went to the Anitkabir, which is the memorial place for Attaturk, who is considered the Father of Modern Turkey. He did much to help this country. He prevented it from being carved up and divided among other countries. He also helped it to be established as a secular country, which is why I can now live here without a head covering and can read Turkish words with a familiar alphabet. 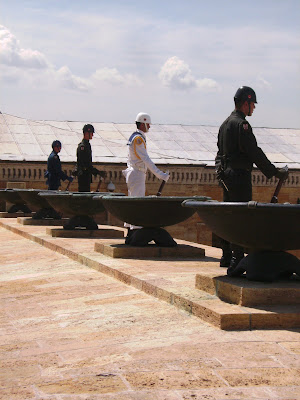 At one point there was fanfare, and we were told to wait to go in the next exhibit for 15 minutes. As it turns out, our beloved country Singapore was honoring Attaturk with a wreath at his tomb. Firstborn was born in Singapore. It's hard to explain this feeling I get sometimes, but I think God just wants to remind us that He was with us then, and He is with us now. 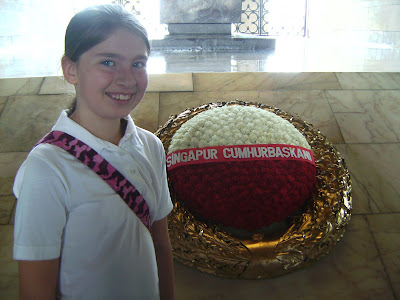 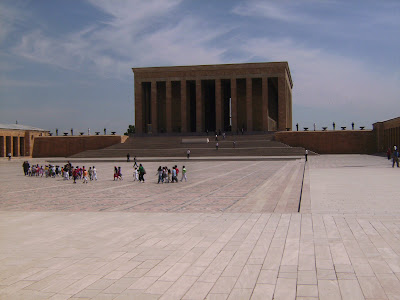 These giant women statues represent women who are grieving for the death of Attaturk. The little women below are imitating them. 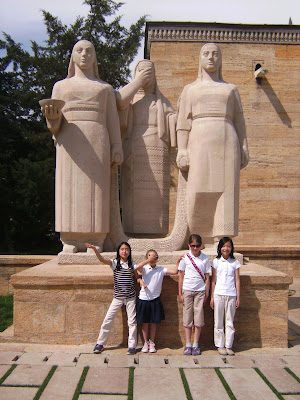 I really think if I had taken Big Ben, I could have gotten the guard to smile. He was very tough to break. 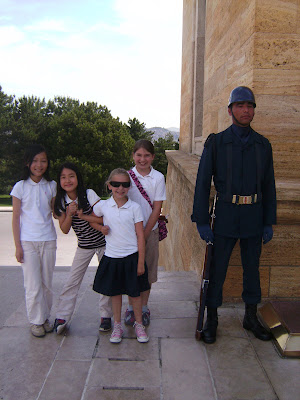 We got to see Attaturk's cars and boats, and even his preserved dog. 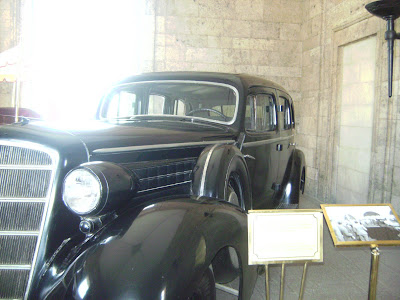 These guys look like toys Big Ben lined up, but they are real. 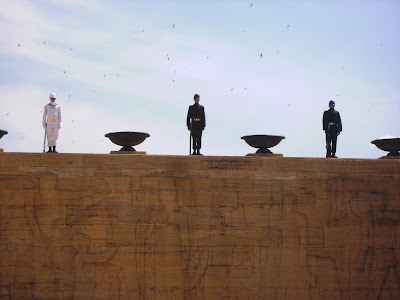 The 4th grade class of Oasis with Mrs. Park. 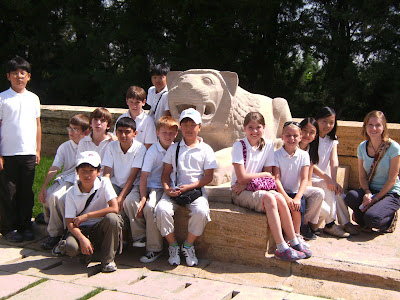 I was able to catch a guard change on video.

Perhaps the most special part of the day for me was to meet some students from a deaf school. As soon as they saw us, they all began doing a motion under their chins. I had to know what it meant. "Foreigner." was my guess. Later the teacher and I spoke. He asked about our students and where they were from. He told me about his students. He said that motion was "European." They assumed we were from Europe. The kids were just precious. One kept asking me for my watch. I thought he wanted to know the time, no he wanted my watch! The teacher and I talked for quite a while, and he had to tell everyone there I have 5 kids. Then everyone had a good laugh at their shocked reaction...over and over and over. In the end, I asked to take their photo (which I accidentally took as a video) and gave him my card. He said he'd love for our schools to somehow link. As my friend wisely said, "Every positive interaction with us is good." Indeed.

Posted by Sara Campbell at 3:52 PM

What a God kiss that Singapore was honoring Attaturk at just the time you were there. God is so sweet to His children.