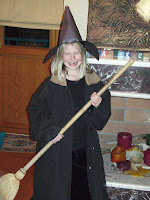 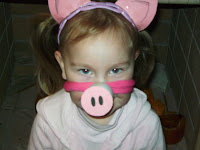 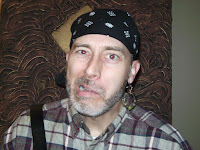 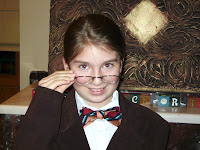 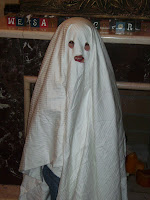 Being born overseas, my kids have never really experienced "Halloween," until last year. (We once bought an imported pumpkin in Singapore and carved it with Mary Erin, she wanted to know why we were carving a Papaya!) But last year, we were thrilled to be joined with other young staff kids for the first time, so we decided to let the kids all dress up and Ross drove them to staff houses to trick or treat (we all live in the same neighborhood). They enjoyed it so much, we made it a yearly tradition. This year I asked them what they wanted to be for Halloween. We had not talked it up, it was just a casual question over dinner, but the 3 older girls blurted answers out without hesitation. Mary Erin wanted to be a Professor, Annika a witch, and Esther a ghost. I suggested Eva be a pig, knowing we had a pink jogging suit for her.

The teachers graciously signed up to have their houses visited. I appreciate how they can so quickly morph into Aunts and Uncles for our kids, who are away from relatives.
We had so much fun creating the girls' costumes, and I was continually reminded of Halloween when I was a kid. No Walmart. Low budget. High creativity.

Mary Erin was inspired to be a Professor by some eyeglasses she snagged from the Lost and Found bin at school at the end of the year. (There are perks to being a Principal's kid.) Annika and Esther both wanted to be something scary. They know so very little about Halloween, which I am happy about, but they said a witch and a ghost were "true Halloween costumes."

Ross is the artist in our home, so he made the witch's hat. Mary Erin found Annika a broom today outside (being thrown away). Esther's costume was a 5 dollar sheet bought at the local market. Eva just needed a 1/2 of an Easter egg to be turned into a pig nose.

The best surprise of all was during dinner. Ross didn't come to dinner, but locked himself in the bathroom. He then emerged as a pirate with one of my earrings in his ear! The girls squealed with delight and started begging him to actually take them as a pirate.

I hope the preparation for this night will be as sweet of a memory for them as it will be for me.
Posted by Sara Campbell at 6:41 PM

Sara, I have to tell you I am surprised to see that ya'll celebrate Halloween. Before you think that is a negative comment, let me explain. I have great memories of Halloween as a kid. I grew up in a Christian home and there was never one thing evil about Halloween. It was a fun night of dressing up (I was always a witch) and going door to door for candy. My mother has reminded me many times since of the scripture in Titus that says, "To the pure all things are pure." I have always let my kids celebrate Trick-or-Treating/Halloween inspite of the frowns I get from many other Christian friends. I know you are very particular about your children, as I am about mine, but you are from a different era so that is why I was surprised. I thought I was the only one that still viewed things "the old fashioned way" believing in the innocence of childhood.

Anyway, the pictures were great. It is a great family time. We also get creative with the costumes because it's just more fun the old fashioned way. I still make Halloween goodies such as graveyard cake and worm punch. One year I had boo-burgers.

i love it!!! especially the creativity-looks like y'all had a great time-

Melanie, you perfectly stated my thoughts on it! Thank you!

I love the girls and their costumes. ok, my favourite is the ghost (she must had perspired under the sheet!).

Hui Ling, if we still lived in Singapore she would have perspired! But not here. :) Thanks for the note. Sara