Hickey on my boy 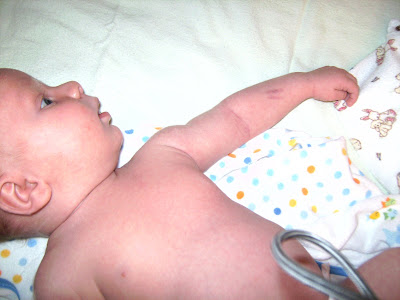 Well, most of the last 1/2 week has been consumed with de-licing the 3 of us who contracted lice and sanitizing my home in case the lice decided to make a home with us. 22 hours of egg searching, 12 tied-up bags of laundry, 8 lice treatments, several dust-free couches and rugs, and 3 cleared-up heads later, we are finished. As unpleasant as it was, it became a family affair and I have to say I was impressed with how everyone chipped in. Ross methodically combed my hair piece by piece, the girls bagged up stuffed toys, and everyone found ways to help. It is a joyous Thursday morning because we are finally all clear. The girls have all been sent off to school with tight braids and stern warnings not to share hats (and every other piece of motherly advice I could think of). After reading about lice on the Internet and even dreaming about them, I decided NOT to dedicate a blog post to them, hence a new subject completely. Enough said.

Hickeys. That is my subject. One morning I went to wake Benaiah and dress him. I discovered this strange mark on his arm. I thought it must be that some really chic Turkish woman had kissed him with her maroon lipstick. Upon closer inspection, I saw it was a hickey! During the night, he had given himself a hickey trying to get some milk. So now that he knows what they are like, he won't ever need to get another one. :) You can see his sweet little hickey in the above picture, along with some serious fat stores.
Posted by Sara Campbell at 9:53 AM

Sara,
He is so sweet! I bet he gets lots of loving with all the girls. Glad to hear you are free of the crawly bugs!
Whitney

Sara-
That is really funny! SK would give my hand a hickey if I let her. She is into putting everything in her mouth and sucking HARD.

Well, I'm just glad this was about the little boy in your house and not the big boy...cause...well, you know.

And I am sitting here itching after all this lice talk. EEK.

What a beautiful little boy!

I'm sure Cassie has told you this but when Rachel was a baby, I had on a sundress (I was in middle school) and was holding Rachel and she was sucking on my shoulder and I ended up with a huge hickey - funny yet embarrassing!! :-)

Glad you're free of lice - yucko. Did you get to get rid of the stuffed animals? That might be a good thing - a little dejunking!