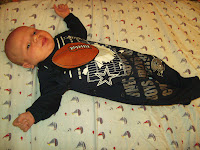 I grew up being a Dallas Cowboys' fan. My big brother ensured that I properly memorized all the names and positions of the players each season. You can imagine my dismay when I discovered my (then) boyfriend Ross was a Redskins fan. I wasn't sure how we'd navigate through this as a couple. We finally agreed not to talk much about it. As you know, we married, so I guess that was a good strategy. Now that we have a son, the issue has resurfaced.
I was given some Cowboys pajamas for Benaiah and giggled one night as I slipped them on him. Ross said very little. It happened to be a night that Benaiah cried quite a bit before bed, which is rare for him. I attributed it to a gassy tummy. The next morning Ross attributed it to his distaste for his pajamas. I have come to the conclusion that it may just be a hopeless cause, but I did make sure to get this photo, so that one day when Benaiah is older he can see I tried.
Posted by Sara Campbell at 3:06 PM

Too funny! Glad you have the picture as evidence!

It is a hopeless cause. Mom does not win the sports issue against Dad and his boys. They have this "thing" when it comes to the manly arts such as football, baseball, cars, wrestling around in the house, etc.

I lost with the Yankees, but it took me longer to give up than it did you. :)

Ha - that is funny. We have the Ga/Ga Tech war in our house - always fun!!! Great picture!