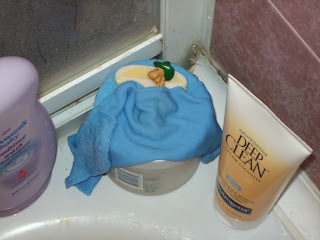 Sometimes as I am picking things up around the house, I will stumble on something that makes me laugh out loud. I once found a Barbie car with Barbie herself in the passenger seat in a wild reckless merriment, arm in the sky. Her boyfriend in the driver's seat was not Ken, it was Shrek. Without fail, the scene has been created by Esther. She makes the strangest combinations of toys and when I study the set up closely, it always makes me laugh. Last week I got in the shower before bed and found this. A little giraffe had been put to bed on top of my apricot body scrub. His pillow was the soap and his blankey was Benaiah's washcloth. I had to take a picture, but I didn't have to ask which kid had done it.
Posted by Sara Campbell at 11:34 AM

That is too funny! I found in Ruth's room her dollhouse set up after her quiet time. She ran out of chairs around the table to seat the family so one of them was sitting on the toilet at the table!