After touring the Hagia Sophia, we walked across the street to the Underground Cisterns. Built in the 6th century by Justinian, it is the largest surviving cistern from the Byzantine times. 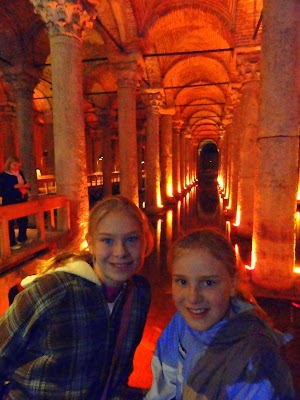 What I find interesting is that it wasn't really discovered until around 1545. There was 'rumor' that people could access water through the basements of their homes, even fishing from them. Then the cistern, capable of holding 100,000 tons of water, was uncovered. At that point, they began throwing garbage and corpses there (a mental picture I can't seem to shake!) The columns are beautiful, and perhaps the weirdest is this upside down view of Medusa. They're not 100% sure why she is upside down, but perhaps due to superstition and her gaze at them! 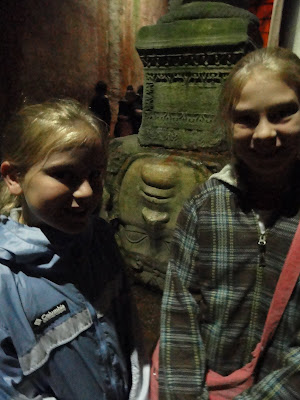 Another Medusa is sideways. 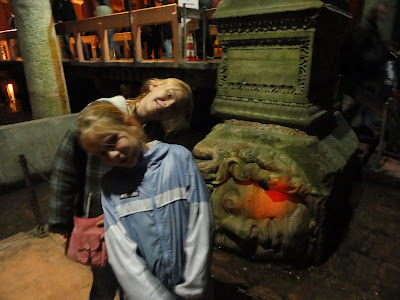 Firstborn had already seen it, so to save money I just took in the two middle girls, complete with our printed-off-the-internet-at-home school id's, which worked to give them discounted entrance! How can I not let my children see a 6th century cistern that we'd been walking on top of all day?! I love this place. It is dimly lit, with little drips of water every so often on your head. It was a location used in the 1963 James Bond movie From Russia With Love. 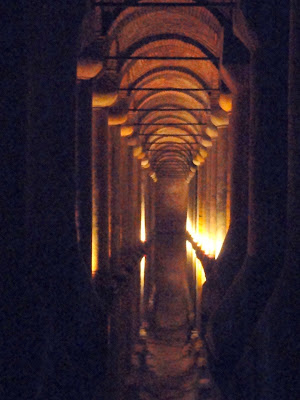 Posted by Sara Campbell at 3:29 AM