After we made our way back to Sultanahmet, (the old city) we went to the Hagia Sophia. Built in 537AD and considered the crowning piece of Byzantine architecture, this building has withstood many challenges. It has survived earthquakes and invasions. Though originally built as a church, when the Ottomans Turks conquered Constantinople, it became a mosque. Since the 1930's it has been a museum.
CC taught us a little about it before we went inside.(That's a tomb behind him. Can you spot the cross?) 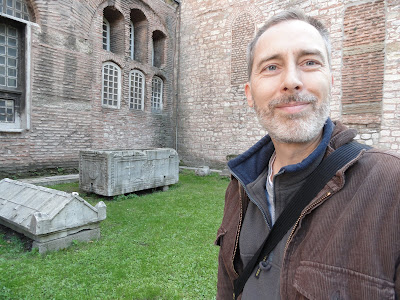 The beauty inside is indescribable. The dome is supported entirely by flying buttresses on the outside. Therefore, you see a totally unobstructed view of the dome and all the 1500 year old paintings. It's large enough on the inside to house the Statue of Liberty. 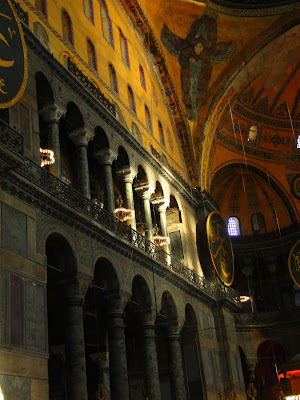 This is perhaps my all-time favorite picture. 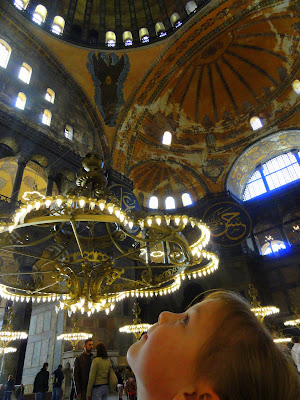 I took this picture lying down on the ground and looking straight up.The angels all have six wings. 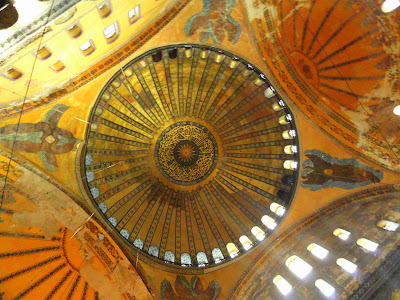 As you can see below, the Hagia Sophia is not remarkable on the outside. Because all of its support is anchored there, its beauty is only shown inside. The many mosques surrounding it are just the opposite. They are gorgeous on the outside, but much less remarkable on the inside, as the pillars to support them obstruct the view. I find the entire situation to be very symbolic and interesting. The Hagia Sophia will always be my favorite landmark in this great city of Istanbul. Built to honor God, withstanding all outside forces that threatened to destroy it,  and showing a beauty far surpassing the others (but only on the inside), it speaks volumes in its silence. 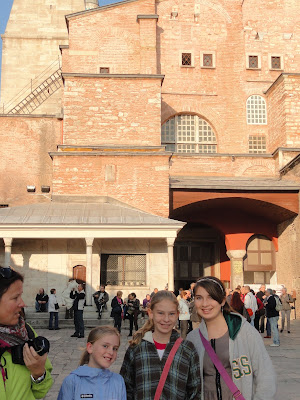 Posted by Sara Campbell at 8:29 PM

Sara, I have been to this beautiful place! It is incredible. I was 8 years old and I remember my trip to Istanbul by train (from Ankara) 21 years ago. The Topkapi palace, the Hagia Sophia, the Grand Bazaar, and the Blue Mosque. Then later when I was a teenager I would see things in the history books and I could say "Yes, I've been there" Istanbul is an incredible city. Your 3 older girls will remember this for a lifetime! (The two little ones may need a refresher trip)
Blessings,
Megan in TN

P. S. You are only fueling my desire to see Istanbul! :) I knew it must be special because of the way it has always been written about.

I have enjoyed all your traveling blogs lately. This one was especially written so nicely!

In His Strong Arms said...

Thanks, Sara, for taking us to see the beauty of Istanbul!