Scottish for the Day

Every year the kids in grades 1 and 2 have "Country Day" where they represent their home country. My little 2nd grader was born in Singapore, holds an American passport, but decided to represent Scotland (we are Campbells afterall!). There were a few other kids representing America, so she choose to be a Scot for the day. She learned so much! She found some real Scottish heroes like Eric Liddell (a Christian Olympic champion who refused to run on the Lord's Day); Mary Slessor (a woman who went to Africa and convinced the tribes there that twins were not a curse of the Devil, thus saving many lives); Alexander Graham Bell, King James (as in KJV)...the list goes on and on.
She got to dress up in a native costume. We scoured the house for a tartan. Unfortunately my only Campbell tartan is in the form of a winter blanket. But we did find this jumper, along with sister's borrowed boots, and a headpiece just for fun. 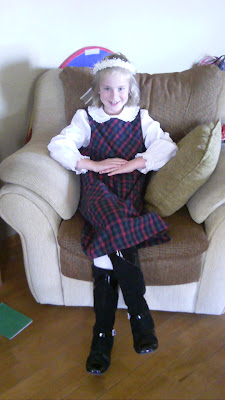 And she took a native dish. Scottish Shortbread, anyone? 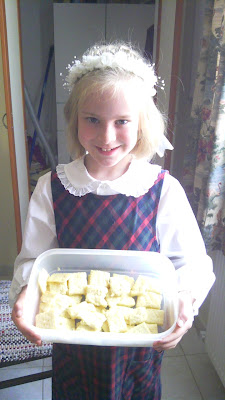