We've never had such a thing as a mall in our neighborhood. In fact, to be totally honest, we all sort of liked the quiet sounds of the forest behind us and patronizing the mom-and-pop shops in our little neighborhood called Cigdem. But let's be honest....when they started construction on a mall just down the street....and we were able to read the Turkish signs that confirmed it....and we all thought maybe, just maybe, they'll even put in a Starbucks, we got pretty excited. We watched. We waited. We did a little wager at school about when it would actually open. And then word started to spread...it would be opening at the end of October.

And it did! It did open....the very same weekend "they" (not sure who exactly "they" would be) decided to totally block off, then gut, the main road beside our new mall.

Never fear. There are no lawsuits here (few, anyway). There's no ACLU aiming to protect us (thankfully.) So, when the mall opened, we just strapped on our hiking boots and walked through all the construction. There's no other way to get there. We are literally just down the street from it. The lit-up rectangular building in the back is the newly opened mall. 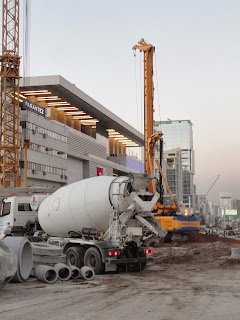 We stepped over downed light poles. We hopped through reinforcement wiring. We dodged cement trucks and cranes. We shielded our eyes from blowtorches. The workers kept right on working. 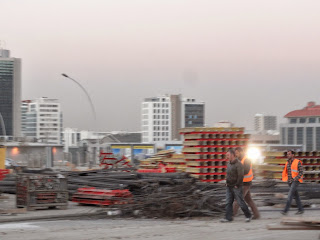 And we made it to the Starbucks, with only a little red mud on our shoes. 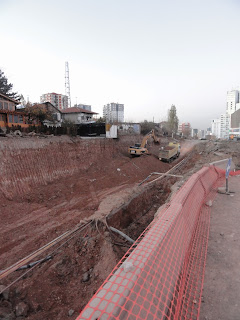 At one point, being the American that I am, I stopped to ask a truck full of workers if it would be ok if we walked through. I just could not fathom that anything about what we were doing was legal. They seemed extremely amused that I would ask them. They replied, "Go ahead, sister."

And I am happy to say that our new Starbucks has Gingerbread lattes. Sweet Cheeks and I split one. She exclaimed, "It tastes like you are drinking a cookie!" And I suppose after all that effort to get there, it tasted all the better.
Posted by Sara Campbell at 7:55 PM

Oh, how fun! Isn't America crazy? Can't for the life of me figure out how this craziness seeped in. :). Then again, I can but won't bore you with my theories on that.

What you did with your kids was just what my mom did with us growing up. We only had one car, so Moma would grab us by the hand in a death grip and take off walking. We crossed busy four lane highways and bridges to get to the very first Taco Bell ever built in Huntsville. Moma had saved her change ($1.00 worth) so we could buy two tacos and one burrito. Oh, how I remember that. It just doesn't taste like it did in those days. Sometimes we went a different path to the Green Stamps store. Do you remember those?

These are the things in life that are universal regardless of where you live. Because the kids have done without the easy access, it makes it all the more special.