My washing machine and I have a close partnership. It's old. We bought it already used from someone six years ago. I routinely tell it things like "We're in this together." and "Hang in there, baby." I plan to use it until it is completely dead. Well, this week, it quit spinning. We chatted. I tried again. It still wouldn't spin. Some repairmen came, looked at it, told me the motor was dead, then charged me 15 Lira (US$10) for the service call. Cheap, I know. It's a perk of being here.

So, this morning, those same men came back to replace the motor. CC just flew to the US this week, so Big Ben is man of the house now. He was very leery of these guys. They were nice enough fellows, but I am amazed at how a 16 month old boy can pick up on the fact that they are 1. men and 2. in the house with mama when papa isn't around. He scowled at them. The whole time. He finally warmed up a little, after I repeatedly said, "They are our friends. They are fixing our washer." Then he proceeded to sit in the floor by them and try to operate their wrench. Then a comment was made by these guys to me that made me laugh out loud. The guys kept talking to him, playing peek-a-boo as they watched him try to manipulate all their tools, smiling at him. Then they turned to me and said, "It's a girl, right?" I started laughing. A girl? What about this boy looks like a girl? Ok, so he does have long lashes (thanks to his Campbell genes) and pretty eyes, but he's the man of the house these days, can't you see that?

He even had the dregs of my coffee that morning, which Grandma says puts hair on your chest. 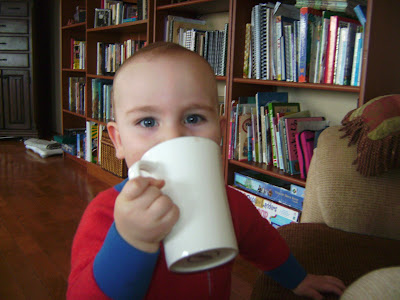 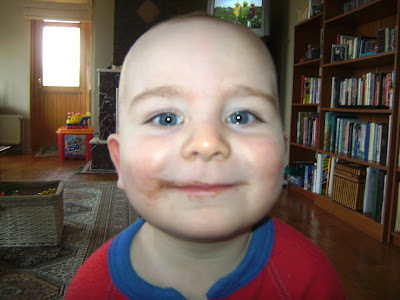 What a doll! That last picture reminds me of one of the girls . . . Eva. He has the same expression on his face.

I bet they thought he was a girl because he looks so much like you!

Yes, I agree, how it is funny that boys instinctively are "boys" even as babies. Maverick has always been very protective, even as a toddler. It fascinates me also.

A girl?? No Way! Clearly a manly man. Remember in Singapore how they thought AB was a boy with her pink smocked dress, hair bows and bracelet?? So aggrivating!

That's hilarious! And I feel your pain about the washer/dryer! You know we just had to buy a dryer. So you are alone with your kids right now? I hope you have a great week! I'll pray for you! I don't like it when Eric is gone. :)