On Thursday, I walked home from work and greeted my baby boy. After I got settled back in at home, I suddenly realized and said, "It's Thursday! Let's do something we haven't had time to do in awhile...have some fun!" On Thursday, there is a big outdoor market in the next neighborhood. It is also open on Sundays, but Thursday is the day with the most textiles. I had been wanting to go, but sometimes forget on the day or I am too tired from work. So, I bundled Big Ben up and, most importantly, packed a whole package of crackers for him. I'll shop. He'll eat. We'll both be happy.

I arrived, and we dashed through the rain to join the crowds searching, sorting, and hoping for a bargain. On my facebook status, I mentioned I had been and what I had bought. One of my old friends mentioned, "Is that like the Turkish Walmart?" She may have heard me talk about a pazar before, so she may have been setting me up for a good punchline, but when my friends (who live here) saw her comment, they LOVED it! I have one Turkish friend who now lives in Texas. She's seen Walmart now. She said, "Pazar equals Walmart, I love it!" Here's what my pazar looks like...it's loud, it's crowded, it's wet and muddy, it's disorganized, it's FUN! 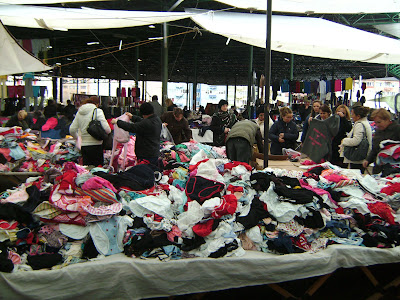 I managed to find a stall (if you could call it that) of underwear. If you dig, you find Gap, Old Navy, Victoria's Secret. I am not sure how they end up here. Are they made here? Are the extras in stock? Are they fakes? They look like the real thing. I dug and dug in the piles (while Big Ben stuffed and stuffed into his mouth) and I managed to find him an Old Navy hockey-design pajama shirt which I plan to use as an undershirt. It's a size 4, but it will fit! Now that clothing companies make their pj's non-flammable, my kids look like sausages in their casings in them! 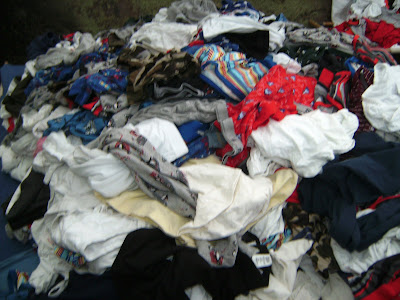 He ate all the crackers, so I bought a bag of oranges, peeled one, and he started into those. He ate 3 before he decided his hands were cold, tummy full, and was ready to go home. 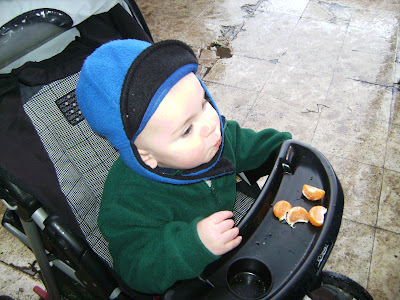 You can buy all kinds of things there. I ended up finding a pair of hand-knitted baby booties for about US$5. When I asked the old teyze (auntie) if she made it, she proudly told me she made it herself. I had to buy them. I just fell in love with her sweet smile and proud answer. I told her I wasn't having any more babies, I had 5, but maybe a friend would. Meeting her and the conversation was worth the money to me. I also bought Big Ben some socks that have leather moccasin houseshoes on the bottom. Maybe that will help him learn to walk, I reasoned. I can't wait to hear Campbell Clansman's laugh when I tell him my logic. I also got one daughter some of those fingerless gloves with the little 'lid' to pull over your fingers if they are cold. All good stocking stuffers! And then just as I was leaving, I happened upon a fish stall. It had been awhile since we had fish. The weather was cold enough so I didn't have to worry about it being trucked in from the coast in the heat and going bad. I asked the man how much. He told me. Then he proceeded to say, "Big sister! You MUST buy this. It's good fish. It's so tasty." I said, "Ok, but you clean it." He laughed. Well, he cleaned it. But I didn't know how to ask him to do all I wanted him to do. So it appeared in my kitchen like this... 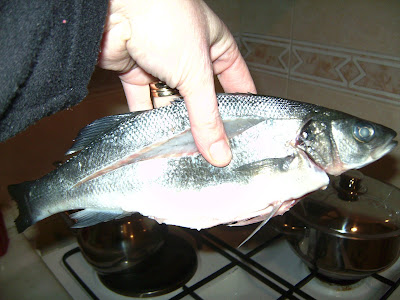 UGH. And to think I used to be Miss Fish. Anyway, yes the spine was out, but I had to cut off heads and tails. When I cut my finger on his fin, I decided he could keep those and I'd just bake them. My New England co-worker told me how to cook it and we had delicious coastal fish for dinner. Come on and see me, we'll hit the pazar too!

Alright Sara, you are hilarious. Yes, anyone who bears the name "Fish" should know how to handle one. I've got to brag a little and say that I can clean one! :) That is one of my few "gross" skills, as I call those unpleasant jobs. My mother's family is from Louisiana and children can clean fish from an early age in Louisiana.

The man probably thought you were going to cook the fish whole, which I am sure you know, you can do - You bake it in the oven. Depending on the fish, you can eat the tail and fins.

Anyway, just had to throw that in. I am not a fisher-woman nor do I like to eat the creatures, but I can clean one with the best of them! Weird, huh? :)

About the Pazar . . . That reminded me of Kathleen in France and their attic sales. She said the whole town gets together periodically and has one gigantic yard sale in the town square. All kinds of neat stuff cheap. Kathleen had a ball at the open markets and attic sales while she was there. She brought me back some Limoges she got cheap. She also bought an unabridged version of Three Musketeers in the original language it was written in, which of course is French. That was a highlight for her. She also visited the author's gravesite. You just have to love Europe and all the history!

So, yes . . Should we ever make it to Turkey, a pazar is a definite place I'd want to visit.

Oh . . . and Ben is so great!! What a sweet little fellow. I had the most fun with Matt (youngest) while everyone else was in school and he was still too young for school. Matt was my buddy and we did all kinds of things together. Like Ben, all I had to do was feed him and he was happy!