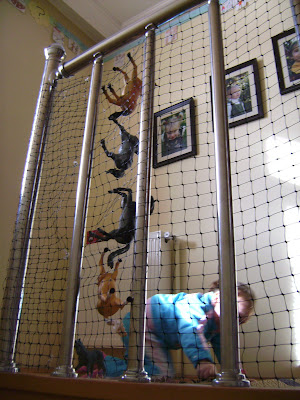 Before we moved to Turkey, Ross made a short trip here to see some potential school buildings and meet some parents who wanted to see a school open. It was sort of a 'scouting' trip. Only I didn't get to be a scout.
I waited anxiously for Ross to return and tell me all about it! He described the city as gray. Gray? Yes, gray. It was late in the winter. It has snowed. It had melted. It had re-frozen. It had gotten dirty from drivers. He said basically everything was gray. Hmmm. Singapore is...green, and fuchsia, and aqua blue...and, you get the point. It's the tropics. "Well, never mind the color, what stood out to you?" I asked him.
He said, "Sara, I visited an apartment that we can rent for a year while the family is gone. All I could think is that our girls could slip through the bars on the stairs and fall." (referring to the stairs leading to each floor of the apartment building). "So, then, you are saying, 'It is gray. It is unsafe.' " That's right, he told me. Well, even if our initial impression was that it was gray and unsafe, we felt very much that God wanted us to move here. So we did. When I first saw the railings, I, too, was horrified. It was just so very different than Singapore. Everything was safe there. Ross began referring to Turkey as the "Plaintiff Lawyer's Dream" because everywhere we went was a potential hazard.
No, the kids never fell through. We did grab their fat little hands tightly every time we left our apartment. We also had this 'stand against the wall' rule while we locked the door to leave. And they never fell.
In our present apartment, we have 2 floors. The railing surrounding our staircase is wobbly, completely unsubstantial, and spaced too far apart. Ross bought some chicken wire type fencing and wired it on, so that if any little person were to slip, it would catch them. And we have a 'no holding onto the rail' sort of rule.
The other day, I noticed that our very unsafe guard rails had a new purpose, as you can see in the photo. I asked. I was told it was a huge mountain for the horses to climb. After they climbed the mountain, they would go down the waterfall (the stairs). I suspect they'll be safe on that mountain just like we've been.
Posted by Sara Campbell at 8:58 AM

Very creative. I love the humor in things!

Sara, your blog posts are so interesting that I love reading them! This was another favorite for me. I must show it to Kathleen and Matt . . . My "horse children." See how much our families have in common? I keep being amazed at that. Our family has had an endless supply of those horses (as you probably do) and had Matt and/or Kathleen lived with such a stair situation, their horses would have climbed that mountain. I am sure of it!!

I also have to tell you the fate of some of our horses. Many are missing their hooves. When Matt was little he would gallop them way too hard and some of the feet would break off. We actually saved all the broken foot pieces and David glued them on a board in a grouping for he and I to keep. (Think maybe we love how our children play? :) Don't ask me why we didn't glue the legs back on the horses -- I don't know. :)

Anyhoo, we still have the footless creatures along with the others. Matt's last horse was Trigger. By that time he was getting old enough to be more careful so Trigger still stands on his own today!!

When we moved, I had to throw out so many things but there were some things I just couldn't part with and that collection of horses was one of them, broken legs and all.

I wish we were closer and could share horse stories . . . Kathleen and Matt would love playing horse with your kids -- even now!! :)