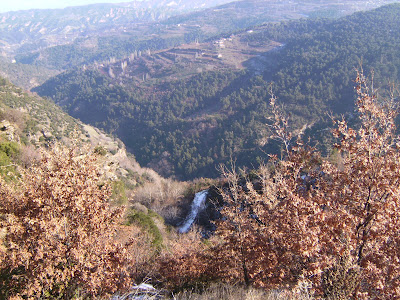 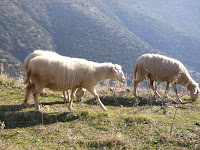 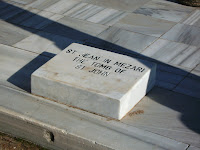 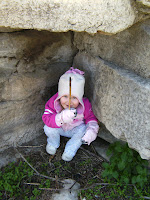 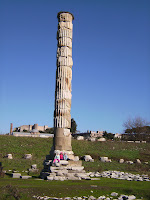 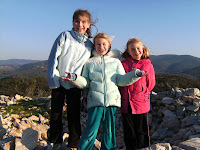 Ross took the girls up the mountain by our hotel. It was a long trek up and Annika led the way in her crocs! There they found old carved stones and an ancient dividing wall running down the mountain. They sure slept well that night. I discovered my children CAN sleep in...if I just have them hike a mountain and then swim for 3 hours prior to bedtime.

We visited a church built in honor of John, the disciple. It was built about 300 years after Christ. There we were hounded by men who wanted to sell us things and give us tours (gladly accepting..expecting... donations at the end). We refused over and over. Finally, Ross felt sorry for this guy and bought some 'Old Turkish Money' from him. We knew it wasn't authentic, of course, but viewed it as a way to help a man out in the cold trying to earn some money. We have been told they feed the coins to a goat, who then digests them, and produces the weathered-look coin. Gross. Now they sit in my house. Coins that have gone through a goat, all in the name of charity.

We also toured one of the 7 Wonders of the Ancient World (not an amusement park, the real thing). It was the ruins of the Temple to Artemis. All that is left is this big pillar of stacked stones. The false gods all crumble, we told the kids.

The drive back was breathtaking. We saw multiple shepherds with their flocks. I snapped this one photo of the sheep while I was hanging out the car window, they were so close.

You remember my entry that I just HAD to post when we got there? About our dangerous drive down? I took this larger picture on the way home. The snow had melted and it was daylight, so it was safer this time. See the sheer drop off? Look Mom, no hands!
And below I have included a video clip. At one point we came around a bend to find an entire sheep flock in the middle of our road. I found it to be very funny. Ross rolled his eyes and said, "I suppose you want a picture of that, too?" while I giggled.
Posted by Sara Campbell at 4:44 PM

on the wings of prayer said...

Sara, Thanks for the note! I was so excited to hear from you! I remember you more than you know. I recall playing school in your basement and you looking at my cast and sling when I broke my arm. :) You are still beautiful with the same smile. I am so excited to read your blog, and I will indulge more when I can focus since my oldest is up now. I'll put it in my favorites and check often. You were right about my cousin...good memory!
God bless you and your family in Turkey! (I told Analise where you lived, and her eyes got really big. The only turkey she knows is what her daddy hunts!)

Back again! It's either feast or famine over here. I just had to comment on the sheer drop off. I am mortally afraid of heights. I get sweaty palms over bridges and avoid them whenever possible. I would have DIED, emphasis on died, traveling on that road when it was slick and covered with snow.

Talked to Kathleen tonight and she is taking a trip to sit in on a session of the Missouri State Supreme Court. One of the judges is a C and is also a woman. Kathleen has met her before and really admires her. She is awesome, to be honest. Doesn't G have His children everywhere? I love it! You would not believe how many C-lawyers are in prominent positions in this country.

Judge Russell (above) is meeting with the students when they get to the Supreme Court. She is such an inspiration to Kathleen that I keep telling Kathleen I bet she is going to be a judge one day. :)

Just stopping by and enjoying your blog, as usual.