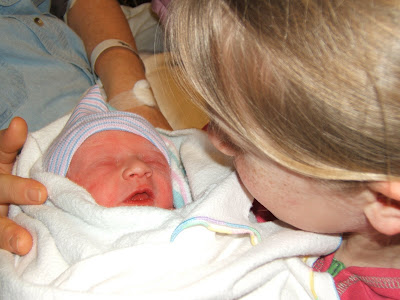 I am a thankful and proud Aunt today. My brother Tim and his wife Cassie had their 6th baby on Sunday. The events of the day were not what was expected, and actually turned into a trauma that could qualify for the line up of a new 911 series, however, our God saw fit to show His power that day. You can read about her story here http://www.housefullafish.blogspot.com/ I was just reading in God's Word about Lydia. In my study, the author says, "Take a good look at your map. After temporarily closing a door in the province of Asia, God strained their eyes to see a much wider vision and took them all the way to Philippi. The account we just read (Lydia's conversion) had a monumental impact! The gospel of Jesus when to Europe. Within a couple hundred years, Christians numbered ten thousands in Europe. And it all started with a business woman named Lydia."

Do you realize that we, in America, received the Gospel because of the believers in Europe? And it all began with Lydia. May this little Lydia impact the world, just as her fore mother did.

Her middle name is Leigh. She's named for an aunt who's trying very hard not to brag.
Posted by Sara Campbell at 9:31 AM

Thanks for posting the link so I could read about your dear sweet niece with the amazingly awesome middle name. What fun ya'll must have on visits together with all the cousins. We're rejoicing with you that all is well.

Oh, wow! I had forgotten what your middle name was. :) Isn't that awesome. No wonder you are beaming from ear to ear, even over the internet!

Lydia Leigh is a beautiful name!

If it makes you feel better, I have only one nephew and no nieces at all. The day my sister told me she was expecting him, I did not sleep all night. I never knew just being an aunt would feel that way. I was already a mother so who would have thought?

My sweet sweet nephew is 14 years old and very tight with his 'Aunt Mel-nie.' He loves my cooking and loves to come to my house because I spend the whole time he is here baking cookies and homemade mashed potatoes with gravy and all his other favorite foods. :)