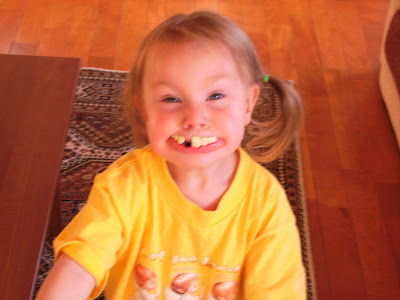 Last Sunday, as we returned from church, Eva was asked to hold the door to our building open for everyone. After we all crossed the threshold, she called out, "Jesus, come in!" I waited to hear what she would say next. Then, "Oh, you can't come in. You have to stay in heaven now." (This is a photo of Eva playing with one of Esther's prized possessions...some fake teeth from her Uncle David the dentist.) 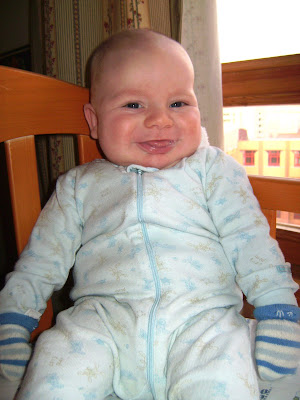 Well, it is official. My son Benaiah is 3 1/2 months old and he is weighing in at 2o lbs. I have always had fat babies, but they generally hit that weight sometime after their first 1/2 year of life. Ross says it is pure muscle. The comments here abound..."Hey, buddy, ever heard of WeightWatchers.com?" and "How is he ever going to walk?" and "Goodness, Sara, what are you putting in that milk?" But hey, he is named for a man who killed a lion in a snowy pit. He's got to have some bulk to be a good namesake, right?
Posted by Sara Campbell at 8:39 AM

Hi Sara . . . Well, it's me, just checking in. We have been busy around here with new experiences also - though mine are not blog-worthy. Ha.

I really enjoyed reading about your vacation. I say over and over how much I relate to your family activities. If you could only know. I smile and laugh at the kids . . . and Ross . . . who sounds very much like David - while Mom is trying to keep some sanity going. :)

The girls are dolls! I love seeing the different looks on Eva's face. Mary Erin definitely reminds me of Kathleen. Annika and Esther are gorgeous. Benaiah looks like such a sweetie! All five of them are beautiful.

My boys were both bigger than my girls and it had nothing to do with anything but genetics. I asked the doctor! Matt was born weighing 10lbs, 2 ozs and was 22 inches long. He looked like he was three months old when he was born! I remember my first look at him and how he did not "look" like he was newborn. Would you believe now he is barely 5' tall? I doubt if he will make 6'. His older brother, who was slightly smaller at birth, is already 6'1 and they are only a year apart in age.

I can't tell mine apart in their baby pictures except for Kathleen, my little red-headed doll.

How much I would enjoy meeting all your kids! I KNOW my kids . . . and David (the biggest kid), would have a ball with them all! We would all fight over who held Benaiah. :) From what you say, he seems to be used to being passed around. How wonderful that is!

Someday, if we have the opportunity, we will have to make a point to have a visit with all of you. Who knows what the future holds?

Thanks once again for sharing. I'd better hush because I know this is 100 miles long . . .

that is hilarous how much "muscle" benaiah has! :) adde just turned 7months and is 17 pounds! :) but if they are going to get married one day-it may be a really good thing that he is bigger! :) love the new pictures! precious!

Awwwwwee Sara Sooooo cute! I love the teeth. You and I would have loved them too.
My goodness, B is big. He just looks good to me!

Analia who is 16 months weighs 21 pounds. I guess I didn't know how good I have it :) That's the cutest smile!

Hillarious teeth picture!
And how darling is Beniah??? Love his chunkiness!!

Sara,
My "baby" who is 4 years old now, weighed in yesterday at a whopping 27 lbs! What will Benaiah weigh at 4? WOW!!

So let's just say I don't know what genes Benaiah has because they clearly are not shared by his Fish cousins.
Eva's teeth are way too funny. Save that photo for her senior high school slide show!