It's Official! I'm a Basketball Mom! 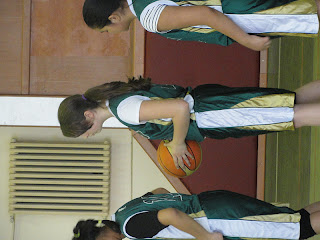 I've waited for this day for many years. I'm a basketball Mom! My darling Firstborn tried out for the Varsity team as a 7th grader. Our team is small, so she made the team. She has faithfully practiced and learned much. And finally, the big tournament came. I could hardly sleep the night before. I thought of my sweet dad and how he used to knock off work early and come see my practices in the ECS gym.

Firstborn was pretty nervous about playing in a game. She went to her coach and asked if this year could just be a learning year for her and next year she could maybe play in games. Her coach said something to the effect of, "Nice idea. No." (Yea for Coach!)

Because Firstborn is the tallest on her team, she had to do the tipoff. Look at her opponent!! 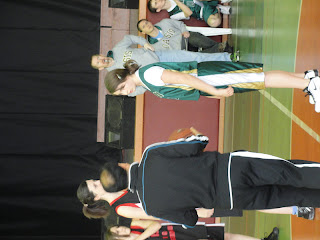 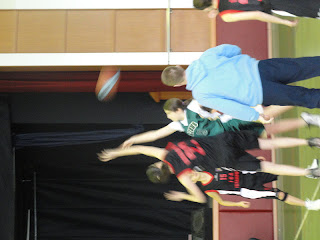 She played about 75% of the game. CC and I just sat there with our mouths open. We were so proud of her! 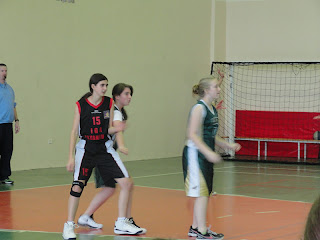 When we got home that night, we told her how shocked we were...she had her head in the game. She held her own. Her only problem was that she was just too nice. I wish you could have seen us in our kitchen that night. CC and I were blocking each other, boxing each other out in rebounds, giving a friendly shove (not a foul if done right!) as we dribbled by. Our kids sort of sat at the dinner table looking at us like aliens had landed in the house. We told her to forget everything we'd ever taught her about niceness and GET AGGRESSIVE! And well, I believe she took our advice. Once again, she started the game and played for a long time. She went after the ball. She rebounded. She knocked it away from the opposing team. She got 4 fouls. I couldn't have been more proud. Way to go, Firstborn! (She was a little upset at her 4 fouls. Her coach told her she was just doing her job!) 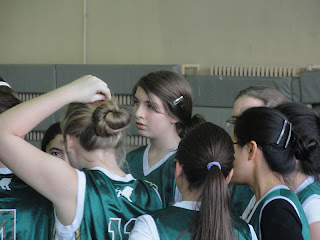 Posted by Sara Campbell at 1:32 PM

Yay, you must be so proud! I have tried & tried to get my daughter to do basketball but she just won't. She plays soccer & does cheerleading. Basketball really isn't her thing because she is "too nice" and when you try to talk to her about being agressive she just cries. Apparently teaching your kids to "always" be nice and share doesn't always pay off in the long run LOL.

I remember when I played basketball...all of 2 years...5th and 6th grade PeeWee Ball. The very last game of my first year only 4 team members showed up to play, so I had to play the entire game. I fouled someone, and I was HORRIFIED. Everyone else stood up to cheer that I'd finally gotten aggressive! :)

WAY TO GO FIRSTBORN!!! Much better than my first experience. My first goal I caught the rebound and put it right back up and scored two points. For the other team. lol. Needless to say, by high school I decided it was way more fun to be the manager of the varsity guys than to play.

My favorite quote of the blog "She got 4 fouls. I couldn't have been more proud!" Awesome. I know exactly how you feel !