Why I Named Her Charity Esther 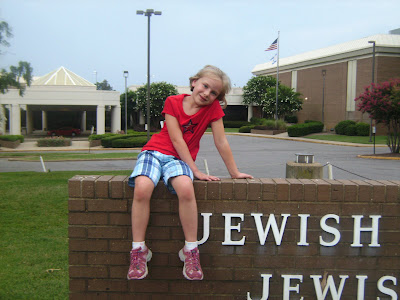 Many years ago, I was dating Campbell Clansman. It didn't take me long to realize that if I 'blew it' on this one, I'd regret it the rest of my life. In fact, I soon came to the conclusion that if I didn't marry this guy, I'd likely never marry. After all, how could I marry another guy that I always considered not-quite-as-good as Campbell Clansman? I had made my decision...marry him or stay single. It was during this time that he invited me to a play at the Jewish Community Center in Memphis, TN. The play was called simply, "Esther." We thoroughly enjoyed the acting and the story. The story is of a queen who was chosen for her beauty, who honored her husband, and saved her nation because of her bravery. During the play, CC said something to me (which I think I'll just save for a rainy-day-later-post), and it was at that moment that I realized, "I think he likes me." I thought to myself, in honor of this moment, this memory, this man...maybe I'll name a daughter "Esther" if I marry him. So I did.

So, when my little #3 was on the way, we had our 5th wedding anniversary. We were living in Singapore. Campbell Clansman treated me to a weekend in a beautiful hotel while some friends kept our other girls. We had decided that was the weekend to choose this baby's name. I had forgotten my Bible, so I used the Gideon Bible in the hotel. (That was when we lived in a country that lets in the Gideons!) I was reading I Corinthians 13 in the KJV. Instead of "love," the word is "charity."

Her name is Charity Esther. I think of her name as a sort of bookend. Charity for our 5th anniversary, Esther for the beginning of our relationship.

While we were in Memphis, we stayed near that very Jewish Community Center. Campbell Clansman took her over and took this picture for me. She's a pretty good example of our love, don't you think?
Posted by Sara Campbell at 10:49 PM

I loved reading this story!

Okay Sara . . . You know you always prompt me to remember things . . . . I, too, loved this story. It was so interesting. Believe it or not, I had wondered why you chose the name Charity for Esther. I assumed Esther was out of the Bible but never could put my finger on Charity.

I loved naming my kids so that there was a story behind their names. I giggled because Ross took you to see a play about Esther. Not because that was something to laugh at but because I was thinking of what David always took me to do . . . ride a horse. Always something to do with his horse.

There is a long story behind his horse. When David decided he wanted to invest in a horse, he prayed and asked God to choose one for him. He didn't know anything about any of the breeds. God chose a gorgeous purebred Arabian. David was offered ten times what he paid for him by a well known Arabian trainer. David never showed him, but he certainly could have. Fixon was definitely a gift from God and one of the most exquisite animals I have ever seen.

David also discovered that he had a gift for training horses. Riding a horse David trained was like driving a Cadillac.

Because of David's love of all things western, especially horses, my oldest son is named Maverick. What was that you were saying about love? Very definitely love to name one's son Maverick. :)

Thanks for sharing that story!