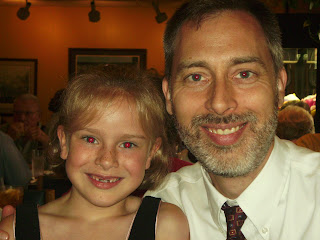 My middle daughter, also known as Miss Middler, had a loose tooth. It was REALLY loose. Campbell Clansman doesn't 'do blood,' but I think wanted to prove he had the stomach for it, so he asked her to let him pull her tooth. All this was in public, at Picadilly Cafeteria. She said she was scared, he begged, she teased. Then I threw a bone to her...let him pull it and I'll let you have a 2nd dessert. She bit for it. He wiggled it, then out it came. Technically she felt it in her mouth and spit it across the table. All this was in front of all the people who eat at Picadilly cafeteria (that would be those who have many mouths to feed like us or the elderly like we are going to be in a few years). Campbell Clansman gave me a good wink and said HE would take her for her 2nd dessert, that he felt she just might want a cherry cheesecake, one she might want to share with her Papa. 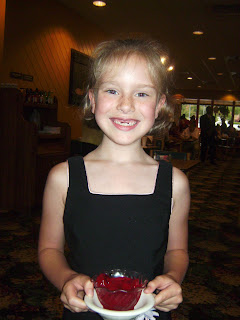 She came proudly back with a bowl of red jello. Atta girl. Love it.

Posted by Sara Campbell at 5:40 AM

That is cute Sara. Aren't men funny? Ross sounds so much like Dave --- Talking the kids into a dessert he likes!

I bet Ross is a little more conservative than Dave, though - the lawyer side of him. When I turn my back walking to the buffet, the straws come out and a contest to see who can blow their straw paper the farthest. They never think I see them. :) By the time I am back to the table everyone is sitting there like angels, not a straw paper in sight . . . . and who do you think taught them that useful skill???

I remember the days of eating where at least some of the kids ate free . . . Days long gone. Now it is a major purchase to eat in a restaurant but you know what? We still do it on occasion because the kids enjoy it so much and we enjoy treating them. :)