Twinkle Toes also braved a try-out for the play. She got the supporting role of Gretel. We had a little costume in our dress up box that was a hand-me-down from long ago. It was far too small for Twinkle Toes. But we took it in. The directors pounced on it, "That's exactly what we want!" We took it in to the seamstress, with new fabric. Without a pattern, she made an exact replica to fit Twinkle Toes. 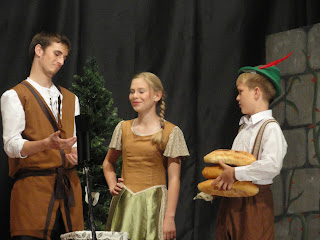 The director told me that Twinkle Toes can always be counted on for "reacting" to the other characters when she is in the scene. She said anytime she wanted to explain how they must stay in character while others are speaking, she said, "Watch her!" 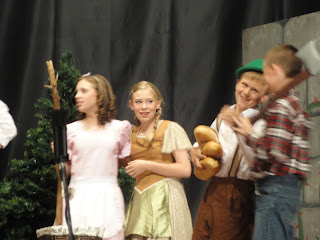 She loves doing plays, it's in her blood. I have a feeling we'll see her in more. 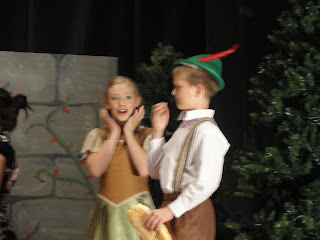 I confess I bought tickets for every performance. One of these days, my little birds will fly away. I won't be able to see them in plays. Now is the time. Because I went to all three performances, I learned more about the plot each night. All the tales were connected in some way. When Hansel and Gretel go to buy their bread, they buy three loaves...one for Hansel, one for Gretel, and one for who-knows-whom...they suggest they just might need it for something. 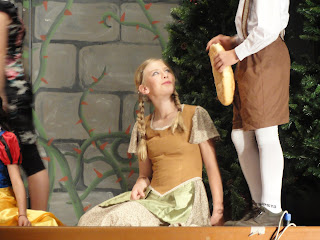 Twinkle Toes played her role so well. The next morning, she even left me a little trail of sugar pop cereal as she walked through the house, though I am not sure she intended to this time!
Posted by Sara Campbell at 8:39 AM

I have to say again that her eyes are stunning!!

Well, I never get enough of staring at my kids either. I guess that doesn't change just because they get older. I still stare at my little red-headed, freckled-face doll who is 25 years old.

Ahhh, the joys of being a mother, don't you agree?

Oh, and I need to add my awe and admiration to the seamtress who made the costume with no pattern!! Don't you love people with that gift?? When Karoline was in her first opera in college, the young woman in charge of costumes was a college student who could do the same thing. We were so awed by that.

I sew, so I know what an art it is and the talent and intelligence it takes.

Absolutely fabulous! She looked lovely. I miss Nigerian seamstresses. Show them a picture and the fabric and watch them go!