CC and I had a special invite to the home of the acting U.S. Ambassador to Turkey. We had a hard time finding his house, which was tucked in a street with massive gates, fences, and machine-gun clad army men. So, we arrived a bit late. After the Ambassador spoke, he came over to meet us. He really praised our school and all the good reports he had heard about it. We are so thankful to the Lord for giving us a good name here.

I had made dinner for the kids before we left and just planned on eating at the reception. However, I left the party hungry due to many reasons...our lateness, our engaging conversation with people, etc. When we got home, I told CC I really never had dinner. He said he'd whip me something up. ???? I was speechless. Mac-n-cheese? A bowl of cereal? CC does not mind my admission that he does not cook at all. He says that's why he got married.

Then he entered the room with this... 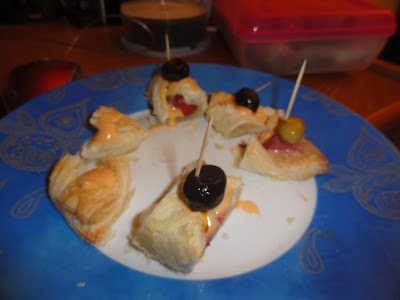 ...and told me it was all about presentation. I was scared to try it. I said, "But what's the orange sauce? Because if you squeezed that out of that Cheese Whiz jar, that's like 2 years old. I've been meaning to toss that...." He said, "Just try it!" I did try it. And it wasn't half bad! Now, an hour later, I had some regrets. Leftover pigs in a blanket, topped with thousand island dressing, and a very ripe olive don't have the best aftertaste. Oh well. That's what hooked me on CC in the first place, it was all in his presentation. And speaking of presentation, it was 16 years ago today that he asked me on our first date, to an Ole Miss football game. I've been hooked on him ever since.

Awesome!!! Were you given a dress code?!

I will admit my stomach turned over on that one. You are definitely a loving wife to eat what was put before you. :)

P. S. I do not remember the date of my first date with David because I was not planning on Date #2. There were bull horns (from a real cow) on the front of his jeep, plus he had the doors off. I had to buckle in and have my hair blown to death.

Had it not been the height of rudeness, there would have been no Date #1 once I saw the jeep. It was my mother who said I could not have such poor manners.

It's always good to know others married normal men who took them on normal dates. :))